Warning: count(): Parameter must be an array or an object that implements Countable in /homepages/45/d96662078/htdocs/clickandbuilds/TheBackseatDriverReviews/wp-includes/post-template.php on line 316
↓
Home→Animated→Weekend Movies: Five Reasons to Watch Barbie: Life in the Dreamhouse

HEAR ME OUT ON THIS! I know – on the surface, this does not sound like a rational choice. What started out as a web series with three-minute long increments about a child’s toy does not sound like a good bet for something to binge watch over the weekend. However, Barbie: Life in the Dreamhouse is TOTALLY worth your time. It’s difficult for me to whittle it down to five reasons to watch it, but here goes. 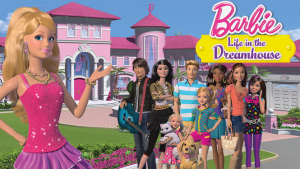 #1 – The episodes are short

As in three to four minutes apiece. Just enough time to get a few jokes in, run through a quick bit of plot, and get out before it drags on for too long. At this rate, you can squeeze a good dozen episodes into a 45-minute period. It’s nice to get into a series where you’re not stuck wading through 10 minutes of exposition and set up. It knows how to cut to the chase.

This doesn’t seem too likely on the surface. I know exactly what you’re thinking – this is a show about a bunch of Barbie dolls, so how funny can it be? This show has an awareness that parents crave in the age of being forced to watch children’s programming. It’s bitingly funny and adult, especially considering that they cover everything from elections and yoga to fame and artificial intelligence. The levels of sarcasm packed into a segment that brief demonstrate an ability to keep the writing tight and fast. It’s quite the achievement. 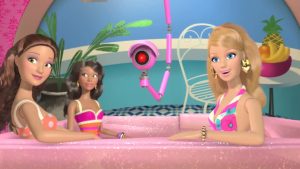 The A.I. that runs her closet is named Closet. It’s brilliant.

Oh yeah. There are confession rooms with running commentary as the action happens. One of the standouts here goes to the pets: a cat, a dog and a horse, each with their own personalities and snarky perspectives (one of my favorites was hearing, “We all can’t have a plastic six-pack, Ken”). They get translated. They’re hilarious, and it furthers the social commentary aspect of the show.

Ken is portrayed as a metrosexual with a crippling codependence on his girlfriend and a need to be the perfect partner. He’s corny as all hell and smothering to the point of being strangely endearing. In some odd way, it works. I chalk that up to his scream. His scream alone is worth it. 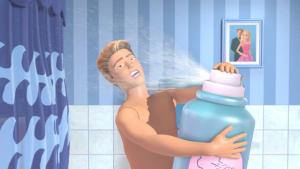 Ken is the shit.

You know what’s better than watching feel-good programming? Watching two people who loathe each other tossing around shade. This show has several sets of people who love Barbie but don’t exactly love everyone else. Watching them learn how to tolerate one another is all well and good, but the real magic happens with the little digs they throw at each other. Plus, there’s Raquelle, who is such an inept villain that you secretly want her to win.

One of the characters, Ryan, is a crappy musician. It’s glorious.

Barbie: Life in the Dreamhouse is available on both Netflix and YouTube.