Warning: count(): Parameter must be an array or an object that implements Countable in /homepages/45/d96662078/htdocs/clickandbuilds/TheBackseatDriverReviews/wp-includes/post-template.php on line 316
↓
Home→Adaptation→“I’ll assume you want to kill me and I’ll fight back with all I’ve got”: Battle Royale (2000) and the Current State of Things

One thought consistently runs through my mind every time I watch Kinji Fukasaku’s Battle Royale (2000): dystopian writers must be pissed as shit because their scenarios keep inching closer to fruition. The film found itself at the mercy of distributors that didn’t want to touch it with a ten-foot pole thanks to Columbine. What’s surprising is that, despite that almost 20 years has elapsed, this film tenaciously remains relevant in so many respects, from the failing government terrified of their children to the notion of surviving the school experience. One scene in particular – between female track star Chigusa (Chiaki Kuriyama) and amorous male classmate Niida (Hirohito Honda) – manages to nail the reaction to which we’re currently bearing witness: the rebellion against male sexual expectations. And kids, buckle up, because it’s a packed scene. 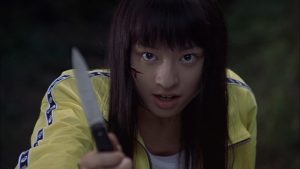 The scene occurs approximately 50 minutes into the film and lasts for about three and a half minutes. Chigusa encounters Niida in the woods during the game. Here’s the handy transcript:

Niida: Hey Chigusa, what are you doing? Training at a time like this?

She gets up to leave without acknowledging him.

Niida: Hey come on, wait! They all gossiped about us.

Chigusa: You made it all up.

Niida: But you liked it. Come on Chigusa, wait. Stay with me.

He moves to turn her around forcibly.

Niida (cocks bow at her and aims): Run and I’ll shoot.

Chigusa (momentarily looks back): What was that? Pathetic.

She turns and keeps walking. He chases after her.

Niida: I’m in love with you. For real.

Chigusa (continuing to walk): Wow, great. Wash your face and try again if you survive.

Chigusa (stops in disgust and throws down her possessions, still not facing him): No way. Did I just hear this idiot right?

Niida (raising his hands and shouting): Sugimura isn’t man enough to actually sleep with a woman after all!

Chigusa (turns to address him, but not fully): Keep Hiroki out of this.

Niida: We’re going to die anyway. Don’t you want to do it once before you die?

Chigusa: I think you should be worried about your life instead of that flaccid thing in your pants.

Niida (angrily moves in front of her and lifts the bow): I’m taking this game very seriously. I’m playing for real.

Chigusa: So am I. Put that down right now and let me go. Or I’ll assume you want to kill me and I’ll fight back with all I’ve got.

She moves forward. He backs up.

Niida: Cut the crap! I’ve already killed. I could just force myself on you.

Chigusa: Try it then!

He fires the bow. The arrow grazes her face.

Niida: It’s your fault. You made me mad.

Chigusa: Always blaming someone else. That’s why I hate your guts.

Reaches into her backpack and grabs a switchblade.

Come at me. Every inch of me will resist you.

At this point, Niida screams and runs. Chigusa gives chase and stabs him in the back, subduing him by jumping on his back to bring him down to the ground. She then begins to stab him aggressively in the genitals until he dies.

Oh there is so much to unpack here regarding the actions of Niida. Niida approaches Chigusa in a way that initially appears innocent, but Chigusa makes it clear with her disengaged body language that she wants nothing to do with him. During the bulk of their non-violent interaction, she refuses to face him. When we start paying attention to the words being spoken, her rationale becomes readily understandable: Niida has spread rumors about a relationship with Chigusa, and attempts to first verbally coerce her into sex after mocking rival Sugimura. He tries to use logic with her: he loves her, she’s a virgin, they’re about to die anyway. When that fails, he switches to flat out physical intimidation, which still doesn’t convince her. Once he shoots her in the face, he blames her for his actions, choosing to fault her instead of the fact that he shot her in the face with an arrow. In a matter of minutes, he goes from rejected school boy to predatory creep to rightful target of a would-be victim. 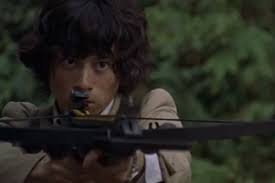 The more things change, the more they stay the same. We’re currently having discussions about blaming a woman for a man’s actions – it’s come up in everything from the Golden State Killer to the latest (at the time of writing) school shooter in Texas. Ladies, you most likely know someone like Niida or have first-hand experience with someone like him: the guy who proclaims to be so very nice and in love with you. Someone who doesn’t take no for an answer, who chooses to spread rumors in the hope that maybe you’ll just go along with it. Someone who makes half-assed threats about how he’s bigger than you and no one will believe you. It’s someone who blames you when an assault happens. It’s sad to see that the pattern of badgering an object of affection or lust into submission is one that’s nothing if not enduring, especially when we witness the escalation of verbal threats to physical harm in a matter of minutes in this film. 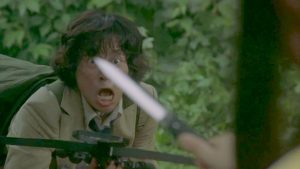 Now would be a good time to get scared.

The difference in Battle Royale is not how Niida’s example of behavior hasn’t changed from 2000 to present – it’s how back in 2000, Chigusa was showing us the way to address someone who refuses to hear the word “no”. Initially, Chigusa does the things we instruct our girls and women to do: she ignores him, she clearly tells him no, and she attempts to remove herself from the situation before things escalate. The problem is that Niida does not accept her answer and continues to plead his case when she’s made it perfectly clear that she does not wish to receive his overtures. Instead of accepting her answer, Niida then tries further coercion and winds up blaming her for the fact that he injured her. Chigusa is faced with two choices: she can run away, or she can make good on her promise and attack. Very telling is the fact that she doesn’t go for his face or his heart: she stabs him in the back as he runs away from her, then proceeds to stab his genitals. That’s a pretty crystal-clear statement on how she views the boy that threatened to rape her and shot her in the face with an arrow. There are several points in the conversation when Chigusa conveys her lack of interest and tells Niida to leave her alone. She warns him rather explicitly that if he continues to harass her, she will assume that he is going to try to harm her and she will fight back. He doesn’t listen. He keeps trying to dominate her. So is it really that big of a surprise when she pulls a knife on the kid who just assaulted her and chases after him? Is it really surprising that the person who spread salacious rumors about her and threatened her with a loaded crossbow is eliminated as a threat? Is it surprising that she chooses not to go after his poor, fragile heart and instead attacks his two best friends? Are we really surprised that when pushed far enough, this young woman angrily stabs the shit out of her creepy would-be assailant when she’s had enough of him threatening to rape her? 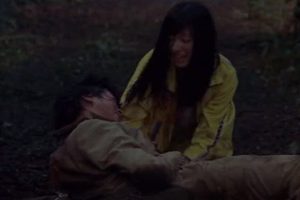 You picked the wrong girl, dude.

Listen, I’m not advocating harming someone right out of the gate, but in the context of this film, I understand. And it’s time for the general population to realize that when you clearly articulate your wishes and those wishes are disregarded, there will be consequences. Margaret Atwood is best paraphrased with the notion that men are afraid of women’s scorn while women are scared men will kill them. Perhaps the message needs to change: we’ll fight back. Everyone does eventually, if they’re pushed hard enough.