Warning: count(): Parameter must be an array or an object that implements Countable in /homepages/45/d96662078/htdocs/clickandbuilds/TheBackseatDriverReviews/wp-includes/post-template.php on line 316
↓
Home→Animated→Weekend Movies: Five Reasons to Watch Akira (1988)

A hard fact of life: not everyone is an anime fan. This makes me sad, as anime is a vast, colorful world that contains so much depth when done correctly. One of the seminal pieces of the genre is 1988’s Akira, directed by Katsuhiro Otomo (who also wrote the manga). A tale of governmental corruption and mutant abilities, it takes place post-World War III in Neo-Tokyo. Here are five reasons to watch it this weekend. 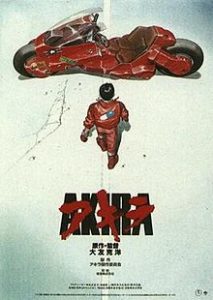 #1 – It changes the manga in a way that works

The bad news: not everything in your favorite book or anime is filmable. Some aspects don’t translate into cinema well. This has the potential to piss off fans, and I get that – it sucks to see some of your favorite parts of a beloved tome go to the cutting room floor. However, some films manage to adapt their material with these edits, and it still somehow works. Akira is one such film. It probably doesn’t hurt that Otomo wrote the manga and took whatever liberties he saw fit.

This film is 30 years old. Do yourself a favor and watch this film to appreciate two aspects: how far ahead of the game the film was in terms of its animation in 1988, and how this film has held up since it was first made. The techniques and style are both highly influential. If you like tipping your hat to one of the taste makers, watch this film. 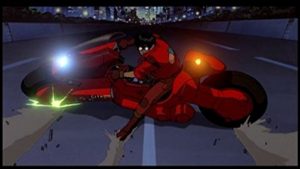 One amusing part of dystopian cinema from the 1980s: every government was out to get the citizens, and every town/city had a biker gang. It’s like an internet Starter Pack for telekinetic powers and social justice. All we’re missing is a serious child who was foretold and we’ve nailed the formula. In all seriousness, it’s hard not to flinch at the dystopia in this film. It’s a bit eerie nowadays, actually. 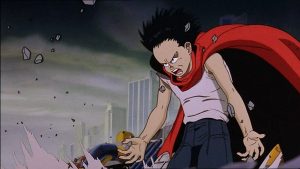 Akira is widely regarded as a staple of Japanese cinema. There was some talk for a while concerning a live-action adaptation starring Kristen Steward (BOO! HISS!), but that has since fallen by the wayside. Since then, news has rolled out that Taika Waititi could helm the live action film; better yet, he wants to keep the ethnicities of the characters as they are. That’s right: someone wants to make a Japanese animated film into a mainstream live-action film that doesn’t whitewash its cast. That hollering you hear from the cheap seats? That’s me.

I highly suggest you just buy this film if you don’t already own it. It’s an important piece that belongs in your collection.