Warning: count(): Parameter must be an array or an object that implements Countable in /homepages/45/d96662078/htdocs/clickandbuilds/TheBackseatDriverReviews/wp-includes/post-template.php on line 316
↓
Home→Comedy→Is This The Real Life? Reality Versus Stereotype in The Broken Hearts Club: A Romantic Comedy

Have you seen 2000’s The Broken Hearts Club: A Romantic Comedy? It’s funny as hell. It covers the story of a group of gay men who are attempting to navigate life and relationships, with varying results. It’s got an impressive cast (Zach Braff, Timothy Olyphant, Dean Cain) and has some great one-liners. Best of all, though, it features something that most comedies lack: a good look at a real gay man, as opposed to a stereotype. 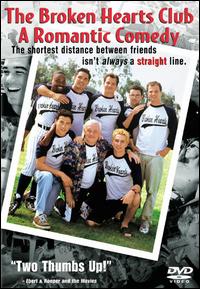 Around the time that this film was made, gay roles had become stereotypes: the quiet same-sex couple; the suffering AIDS patient; the dutiful, closeted father/husband; kid struggling to come out; the same-sex couple that wants desperately to have a child. This is what we were used to seeing in cinema, in part because each of these scenarios was so new to the mainsteam. We were curious about what it was like for someone to come out. We felt for someone who felt that he couldn’t be themselves. We wanted to cheer for two people to get together, regardless of social convention. These situations were high in drama to boot, so they were primed for award-baity cinematic fodder. The downside fo this: the focus was more so on the situation rather than the characters. And that, my friends, is dangerous territory, because it means that the characters are less of people and more a vehicle for a message. That does a disservice to any film as far as I’m concerned. Any good story needs to have something with which you can connect, not just a broad stroke that you hope hits the most people. You need to care.

Where The Broken Hearts Club excels is the realism it lends to its characters, making them people for whom we care rather than one-dimensional characters that are propelling a gay plot. Make no doubt, there’s some stereotypical behavior and dialogue, but the situations are all way too real for anyone that’s been in them, gay or straight. Taylor (Billy Porter) goes through a nasty split that leaves him wandering through the different stages of grief (my personal favorite of which is revenge – the stuffed tiger is everything); this causes Taylor to move in with friends Cole (Cain) and Dennis (Olyphant). Patrick (Ben Weber) struggles with his attractiveness and is stuck in a negativity vacuum. Howie (Matt McGrath) is introspective and analytical to the point that he’s ruined his relationship with Marshall (Justin Theroux). Benji (Braff) picks the wrong man all the time, going for pretty and buff over safe and responsible. Dennis is terrified of relationships because of what they entail, and decides to take a break. Dennis is also the glue of the group, and we all know at least one person like that. Each one of these guys is someone we’d hang out with, if we don’t already; hell, chances are that you read one of those descriptions and saw yourself. 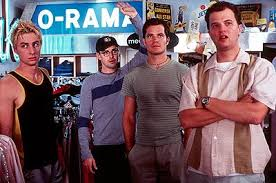 This is the quality that really sells the film: it goes above and beyond what’s out there to present people. Howie sums it up perfectly: “There’s not a single film in cinema cannon that paints the portraitof a gay man that any of us would aspire to be. What are our options? Noble suffering AIDS vicitm, the friends of noble suffering AIDS victims, compulsive sex addicts, common street hustlers, and the most recent addition to all that, stylish confidants to love lorn women. Just once, I’d like to see a gay character that is not sick, has not been laid in about three months, and is behind on his student loans.” Have to admit, this is what you tend to think of – you see the stereotype, not the person. However, this film gets us to care about these men who just happen to be gay. Not every gay man or woman is suffering from AIDS; not everyone is a snappy dresser (can I get an amen from the cheap seats?). Gay men and women are not always to gorgeous sex objects and/or addicts. As Jack (John Mahoney) so beautifully tells Patrick at one point, “Everybody can’t be the same, Patrick. Everybody can’t be straight. Everybody can’t be beautiful. Some people are just gay and average. They’re the strongest, I think.” And let’s face it, most of the people that we see in movies, we can’t really connect to because they’re impossibly hot or so corny that we can’t really relate. It’s kind of hard to feel badly for a Hollywood bombshell that’s had her heart broken because people line up to date women like that. For The Broken Hearts Club, we get to look beyond that and see that our average selves are stories that are rich and beautiful. We can relate to these guys. We know what it’s like to go for months without sex. We know what it’s like to feel ugly. We know what it’s like to make poor relationship decisions, and to get our hearts broken. It’s comforting. We like these characters because they’re home to us. 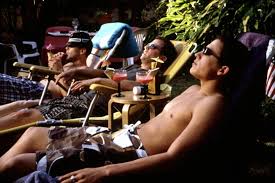 You don’t have to be gay to appreciate this moment.

In that respect, The Broken Hearts Club manages to trascend regular romantic comedies because it’s us, and we don’t have to be gay to enjoy it. We’ve all been there, and we like the people enough to care about them. So when we get glimpses into their world, we still see people. They just happen to be gay.