Warning: count(): Parameter must be an array or an object that implements Countable in /homepages/45/d96662078/htdocs/clickandbuilds/TheBackseatDriverReviews/wp-includes/post-template.php on line 316
↓
Home→Children→Journey to the Center of the Psyche: Mental Breakdown in Labyrinth

A while back, I got the chance to see Labyrinth on the big screen. Let me tell you, David Bowie’s codpiece front and center on a large screen is the way that god intended you to see that film, people. I must admit that I had to be taken to see the movie, because it was not a hit the first few times I watched it. This time around, though, I was able to enjoy it much more. I think half the fun was the fact that I looked at it as the unbelievable story of a young girl undergoing a complete psychosis resulting from unresolved trauma. 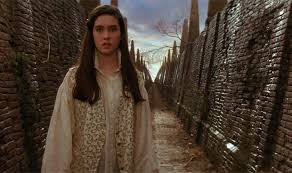 It’s all just one long, barren hallway from here on out.

In short, as a child, I hated Sarah (Jennifer Connelly). She bothered me because of the incessant whining. At 15, she was throwing tantrums like a pro: the glaring, the snappishness, the huffing and stomping. For someone who was damn close to driving age, she had no problem rehearsing a play with her only friend that we could discern: a dog. This was not someone who was part of a theatre troupe of other teenagers, or musical-loving geeks (found in the natural habitat of any high school) – this was a girl living in la-la land, complete with a full costume in a play that only she was performing. Even as a kid, I knew this wasn’t normal. Then there’s the room stuffed to the gills with toys that a 15-year-old should have outgrown long ago, as well as the hateful wishing of her infant sibling away. Even as a little girl, I found Sarah so off-putting that I couldn’t enjoy the movie. I mean, really, when you wish your sibling away, and then he disappears, you can’t suddenly contract a case of buyer’s remorse. You wished him away. He’s gone, girl, and you were the cause of that, so don’t act surprised. 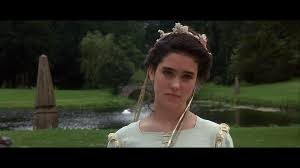 Except that with more experienced eyes, it’s easier to spot the problems of Sarah’s life that make her a more sympathetic character. We see her stare at pictures of her mother, but there’s no mention of anything that happened to her. There are some stark pieces of information to which we’re privy: she has a scrapbook filled with memorabilia, she aspires to be an actress as well, she has a stepmother she hates, she loathes her baby brother, and she’s fixated on hanging onto her childhood toys. Given, I’ve known some people that have unhealthy attachments to stuffed animals well into adulthood, but she gets ferocious when approached with the notion of her brother even touching her teddy bear. She’s attached to the point of irrational reactions, which raises even further suspicion that she’s coping with trauma poorly. Even worse: it’s revealed in the novelization of the film that Sarah’s mom had an affair with her costar and bailed on her kid, with visits to mom and her boyfriend while she lived with dad and stepmom, itself a shitty hand with abandonment issues. Still, it wasn’t explicitly noted in the film – all we get is a scrapbook. Either way, this is someone who could have benefitted from seeing a family therapist. This screams that not only did something bad happen concerning her mother in the recent past, but that her father moved on at lightning speed, and this girl is having an enormously difficult time adjusting to it.

This causes the whole concept of the labyrinth to shift from Sarah’s fantasy to Sarah’s delusional coping mechanism. If you look closely at her bedroom, you’ll notice that everything in the labyrinth is a reflection of what she sees, from her maze toy to the M.C. Escher poster on her wall. The stuffed animals are all reflected in the individuals she encounters in the labyrinth. Even the plot of retrieving her brother – complete with summoning spells – stems from the play she holds in her hand at the beginning of the story – she’s been busy memorizing lines and plot from this book. Then there are the overtones of her journey itself: Sarah’s feats are easily beat, and lack the truly diabolical levels to which they could venture. The Goblin King could have demanded sexual favors or killed and roasted her baby brother, but the story doesn’t go there; Jareth is really just trolling for a bride, which is a strange way to pick up women, but reflective of how fairy tales operate. Sarah is too naïve to realize that in most cases, she’d be expected to deliver sexually in this scenario. The whole thing smells of someone who is a child, that doesn’t go to those places because she’s still young enough to not think of them. And so she crafts a fantasy land using things she knows in order to process that it’s okay to feel affection for her little brother and still retain some memorabilia from her childhood. She doesn’t resolve her anger at her father or stepmother, and at the end of the movie, we still don’t know what happened to her mother – it’s all about her relationship with saving an innocent baby with a familiar cast of supporting characters. 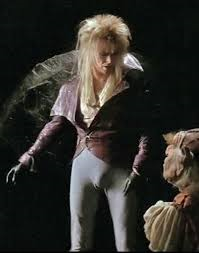 You didn’t really think we were getting out of here without a shot of Bowie’s codpiece, did you?

I went from wanting to slap Sarah to suddenly wanting to hug this kid and ask her if she wanted to talk about it over cheesecake. These are complex life events and emotions, and the kid clearly has been impacted by trauma. She deals with it in the best way she can: in a fantasy role play where the challenges aren’t too hard to discern, with friendly faces that help her in the name of friendship. There’s no realism here – it’s all in the eyes of a child. The film stops being about a girl trying to save her brother from a king of goblins – it’s a girl trying to cope with a changing world that she must translate into her own familiar terms. That deserves some sympathy.