Warning: count(): Parameter must be an array or an object that implements Countable in /homepages/45/d96662078/htdocs/clickandbuilds/TheBackseatDriverReviews/wp-includes/post-template.php on line 316
↓
Home→Children→Weekend Movies: Five Reasons to Watch The Neverending Story

While I’m chugging down the nostalgia line, let’s head back to 1984. It seems like we’re getting there already with the political climate (good afternoon, NSA – smashing sweater we’ve got on today), but we’re going for a different reason: we’re going to revisit the childhood favorite The Neverending Story. Brought to us by Wolfgang Petersen – before the monstrosity that was Troy – it adapts the novel of the same name, about a boy who reads a book about a kid trying to find a cure for his leader’s mysterious illness. Here are five reasons to watch it this weekend. 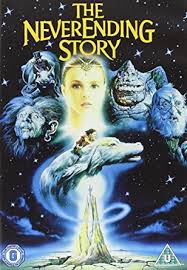 If you’re a child of the 80s like yours truly, you will love watching this movie again. It’s got cheesy dialogue, space age costumes, and some damn amazing synthesizer-driven background music. Really, break out a Casio keyboard and listen to me try to (poorly) recreate that soundtrack. And you know what? Every fucking 80s kid does this. We all try to play our favorite movie music and at least one person in the room will get what we’re doing. We’re a tribe.

#2 – The author disowned it

This one is an entertaining reason if you don’t know the story behind it. Michael Ende wrote the beloved children’s novel, which was well-known long before Petersen got his hands on it. He had some issues with the script, because he felt that the essence of his story had changed dramatically. He asked the producers to do one of three things: remove his name, change the title, or stop production entirely. The producers told him to shove it. Ende sued. Ende lost. The amount of drama before this film even came out is so delicious. It’s like the chocolate cake of creative gossip. 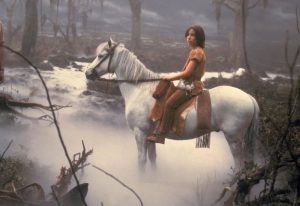 You should be green, goddammit.

Can we take a moment and give thanks to the wonder that was puppetry in the 1980s? Because this film (and several others) really had a grip on the ability to quickly produce some damn fine puppets, which isn’t exactly an easy task if you know the half of what goes into the process. Between Morla the Ancient One, Falkor the Luck Dragon, and Gmork (the servant of the Nothing), we’re treated to some great examples of how much dedication to special effects made by hand that decade had on deck. Bonus: child warrior with a horse is a 80s kid trope regardless of location. This woman included. Everyone wanted their own pony. Everyone.

When you were a kid, Barret Oliver was one of those child actors that seemed to be in everything. When he grew up though… dude, I’m just going to rip the band aid off. He’s a Scientologist. He’s a hardcore Scientologist. He joined Sea Org, and we’ve all heard the stories about the weird goings-on aboard that cruise ship from hell (see what I did there?). What do you do from there? You specialize in printing and photography from the 1800s. He’s gained some recognition for that, and while I can appreciate the exploration of knowledge from long ago, well, the whole thing is more than a tad creepy. Between cult affiliations and then photography and printing methods from yesteryear, it’s a bit too “prep for the bombs” for my liking. But we always have this movie to remember the bullied kid who thought that acting was yelling and whining. 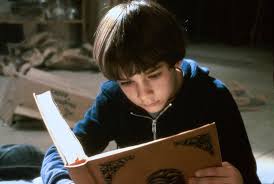 #5 – Some statements on existence

Gmork and Rock Biter have some really good things to say about existence. In some cases, it’s musing about what it will be like when everything is blinked out of existence and it’s just a bunch of nihil. On the other hand, there’s something to be said for balancing that speech out with the abject sorrow of watching everything you love go away, and the way that sorrow leads to surrendering to that sense of nothingness. It’s great because there’s a huge upswing in nihilist humor, and many times, the movement needs to step back and lighten up so that it’s not spiraling further into depression. A kids’ movie got this, and explored the complexities of both allowing yourself to feel and letting go against the backdrop of existing. It’s nice to have a balance.

If you don’t own this film, just buy it. Your childhood will thank you.