Warning: count(): Parameter must be an array or an object that implements Countable in /homepages/45/d96662078/htdocs/clickandbuilds/TheBackseatDriverReviews/wp-includes/post-template.php on line 316
↓
Home→Animated→Little Woman: Positive Parents in Kiki’s Delivery Service

About a year and a half ago (where does the time go?), I voiced some of the issues I had with the parenting in Hiyao Miyazaki’s Ponyo. More specifically, the lack of parenting going on in that film, wherein a pair of five-year-olds are given the keys to humanity and told to make some incredibly adult decisions with little guidance. Miyazaki has this thing about not only making strong female characters, but effectively shoving them out the door at a young age to make their way in the world. It’s a bit harsh and comes off as not having much respect for the parents, who are eager to go about their own business rather than parent. At first glance, the titular Kiki (voiced by Kirsten Dunst) of Kiki’s Delivery Service is in the same boat: at 13, she’s about to leave her family to make a go of being a witch on her own. However, as with most of the themes in Miyazaki’s films, this isn’t strictly the case. In fact, Kiki’s parents Kokiri (Kath Soucie) and Okino (Jeff Bennett) are a different case, which makes the growth of the child all the more meaningful. 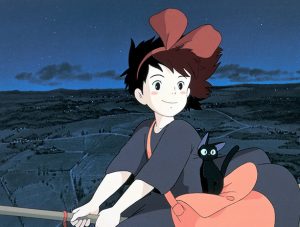 Kiddo, you look a lot like my own kid.

When we first meet Kiki, she’s laying in the grass, listening to the weather report; this is a bid to determine when she’s going to leave the nest for her year of gaining experience as a fledgling witch. Mother Kokiri explains this tradition to one of her customers: “It’s one of our oldest customs. When a witch turns 13, she has to leave home for a year to begin her training,” before sighing, “She seems so young to be leaving home now.” Her customer, Miss Dora (Fay Dewitt), reminds her, “I remember very well the exact day you arrived in this town. A little girl flew down from the sky on her broomstick. And I was certain she was much too young to hold such an important job as the resident witch.” This is a potent reminder to both Kokiri and the audience that this is a tradition, and one rooted firmly in youth: everyone is concerned that the child is too young to endure such an undertaking. Kiki’s father, Okino, expresses disappointment that she’s growing up, but the words and gestures are far more bittersweet in their nature. After he lets family members know of her departure, he goes to her bedroom and lifts her in the air before telling her, “How come you never told me you were growing up so fast?” before gently telling her, “If things don’t work out, you can come home.” Both parents display apprehension at their child leaving them because, well, she’s a 13-year-old girl that’s about to leave home for an entire year to prove that she can live on her own as a witch. It’s a tradition, they’re going to adhere to it, and that means that Kiki the child is going, whether she’s ready or not. 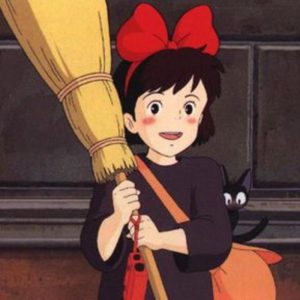 You have no idea what awaits you.

This concern isn’t without validity, as Kiki has some harsh realities to confront in her year away. Kiki readily admits that her most solid talent as a witch is flight, which her mother has already conceded she can barely do. She quickly sets up shop as a flying delivery girl, but then is confronted with the expenses of adult life. In buying groceries, she spends most of her savings, telling Jiji (sidenote: how much do you miss Phil Hartman?) that all they can afford to eat now are pancakes. During her first job, she runs afoul of crows and has to go back and find the parcel she dropped while flying. She has to take her job seriously, which means she finishes a delivery in the rain to an ungrateful girl. On top of that, she has trouble adjusting to the city in multiple ways. She does not realize right away that she has to be mindful of street traffic before running out into the road, contrasting the reality that she is indeed a very young, inexperienced girl living in the city on her own. She stares whistfully at the pretty clothes other girls wear, wishing for a pretty pair of shoes and nice dresses. While at the beach with Tombo (Matthew Lawrence), Tombo’s friends remark that they’re surprised that she’s so young and working, which comes across as a clear class distinction to Kiki. The lesson sends her reeling, which leads to the temporary loss of her powers. It takes some quality time rediscovering herself before she regains the ability to fly, ultimately adjusting to life on her own in the big city before writing back to her parents with confidence. The thing is, Kiki’s parents make all the difference in this adjustment, whether it readily appears so or not. Her mother isn’t shoving her out the door – quite the contrary, Kokiri is taken off guard when her daughter announces immediate departure, and she begins to list the things she wishes she had done with her prior to Kiki leaving, such as potions and flight lessons. Kokiri gives Kiki advice in the form of a metaphor for her dress in their final quiet moments before the big departure, telling her, “It’s not the color of the dress. It’s what’s inside.” Okino is similiar, in his approach, though more outwardly yearning for the days when she was still tiny and dependent. After expressing how she’s grown, he tells her, “Follow your heart, and be sure to write home as soon as you’re settled.” Both make it clear that they support her, but stand by the tradition of her leaving. As such, they’re allowing her one of the greatest kindnesses a parent can bestow: the ability to go at it on her own, to make mistakes, and to learn. And screw up she does: Kiki runs into traffic without looking, botches a job, and loses her sense of self along the way while she struggles. At the end of the day, though, she comes through for Tombo when he needs her, and manages to find her place. She wouldn’t have had that confidence had she not experienced life on her own. 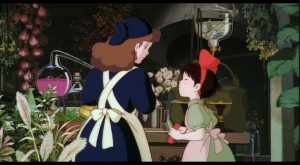 Sometimes, the toughest thing is watching them go do it on their own.

No parent is truly ready for his or her baby to leave the nest – many will tell you that their baby is always their baby, regardless of age. However, Kokiri and Okino make sure to let her know that they’re still there for her whilst fostering that sense of growing into adulthood. Kiki comes of age at 13 when other girls her age are busy having parties and acting spoiled. She may stumble and struggle, but Kiki’s journey sets her far apart from the girls that don’t work. Kiki is special, has powers, and can make it on her own. Echoing the words of Miss Dora at the beginning of the film, “Young people are all the same: they all want to do something different.” By allowing her to be different, Kiki’s parents allow her to grow into an independent young woman that both embraces her adult life while retaining a child-like wonder. That’s a life that will make a parent proud.