Warning: count(): Parameter must be an array or an object that implements Countable in /homepages/45/d96662078/htdocs/clickandbuilds/TheBackseatDriverReviews/wp-includes/post-template.php on line 316
↓
Home→Adaptation→May the Best Man Win: Toxic Masculinity in The Legend of Sleepy Hollow (1949)

The 1949 short The Legend of Sleepy Hollow is a Halloween-time classic that has thrills, chills, and oh hell, even some musical numbers. Based on the Washington Irving story, it features the story of Ichabod Crane, a schoolteacher romancing a beautiful heiress in a rural community who has an encounter with the Headless Horseman. It’s easy to fixate on the lightheartedness of the story: pompous city boy with superstitions gets his ass handed back to him by Brom, a romantic rival that doesn’t want the teacher sniffing around his girl. Upon closer inspection, the story starts getting progressively shadier and shadier. Namely, this story is a demonstration of two sides of the same toxically masculine coin. 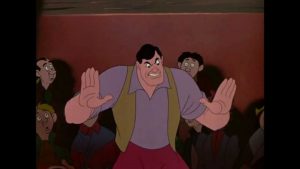 Hold onto your hats, it’s going to get a bit bullshitty.

Ichabod starts off as a bit of a joke, but he’s nonetheless an insidious statement of intention and delivery. Ichabod is a schoolmaster in a rural town, and he doesn’t look like the other men there – he’s not the beefy workman type, but instead has a long nose and bookish demeanor. The qualities of being a more educated man in this setting work in his favor, currying interest with the local women. One in particular is Katrina van Tassel, the most beautiful woman in town. While Ichabod clearly goes nuts over her physical beauty, there’s a terribly disturbing aspect at play that doesn’t get mentioned enough: Katrina is the only child of the richest man in town, and whoever marries the woman described as “plump, ripe and rosy-cheeked” stands to inherit a fortune. This is the largest factor of Ichabod’s quest: he wants to marry well, and he wants to get his hands on her money. If she happens to be hot, so be it – for him, that’s the icing on the cake. But let’s not forget for a hot shit second what his true intentions are: Ichabod wants a piece of his future wife’s inheritance. That’s his main motivation. He can swoon all he likes, but he’s predominantly in it for the money. 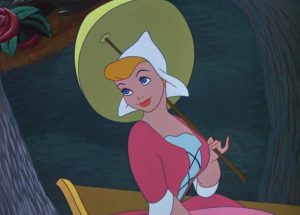 Dat ass is only a bonus.

Brom, on the other hand, is more of the stereotypical he-man. He’s got muscles for days and happens to be a good-looking man, but he’s a territorial bully at his core. He taunts and pranks Ichabod, and wears a perpetual pout once he begins to court Katrina. As if his previous behavior wasn’t enough, we have to watch an adult man sitting on a bench like a petulant child (body shaming a larger female reveler, I might add) at a local shindig, sulking as a woman who’s not fucking dating him dances with someone else. How does he respond? He exploits a weakness (Ichabod’s superstition) by telling a local legend with bravado, then sets up a prank wherein he pretends to be a ghostly, headless horseman in order to freak the competition out. It works: Ichabod leaves town and ultimately marries someone else, leaving Brom free to court and eventually marry the beautiful, wealthy Katrina. 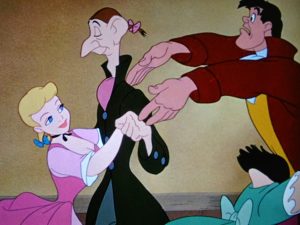 It’s not cock blocking if she DOESN’T PICK YOU.

This entire thing is absolute bullshit no matter how you slice it. Both seek to become the alpha male by utilizing resources to assert dominance: Ichabod by means of superficial greed, and Brom by means of physical intimidation and trickery. At first glance, it’s easy to feel badly for Ichabod: no one wants to see the nerd lose the chance with the hot girl, and Brom certainly plays the part of the meathead jock that’s cute now but ultimately mean-spirited in his pursuit of the dream girl of the story. The problem we encounter comes in the form of realizing that Ichabod is in it predominantly for the money: he wants to be rich, and he’s targeting the only child of a wealthy man. He does not give one single shit what she is like as a person; Katrina could be deeply sensitive, or she could be a fucking spoiled nightmare for all we know. That’s not sweet, it’s not a geek getting a girl, and it’s not an underdog tale – that’s predatory. However, for his part – before we go saying that the geek boy deserves the girl (which is problematic itself, because no one should blindly love you just because you happen to be a geek in the general vicinity) – Brom isn’t much better. Yes, upon closer inspection, Katrina shouldn’t be with Ichabod, but is Brom really something to write home about? Lest we forget, at the beginning of the story, she’s allowing herself to be pursued by Ichabod, not Brom. Brom’s actions are entitled and, frankly, a serious red flag to anyone that’s ever had to deal with a controlling partner, male or female. Scowling in public? Concocting an elaborate plot to scare off the competition so that the object of your desire/obsession will pursue you? End game of a legally-binding marriage? We’re one cooked rabbit away from Fatal Attraction, people. Really, this is how it starts. Next thing you know, Katrina has to leave the house with her bonnet pulled low to cover the bruises and she can’t have any friends because Brom doesn’t approve of socializing outside of him. That’s not love – that’s an unhealthy control pattern happening right there. You can’t base a good marriage on deception, manipulation and abuse. 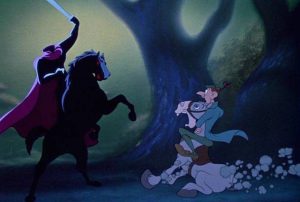 “Daddy! Daddy! Tell us about the time you intimidated everyone else not to date Mommy!”

The most disturbing part of this comes from the fact that we don’t get to hear from Katrina at all: she’s completely silent in this film, slung between greed and possessiveness. It doesn’t matter if there are catchy numbers with a 1940s flare – this is disturbing as fuck. Her only choices, it seems, are a man that wants her for her money (that finds her physical attractiveness a bonus) and a man who thinks the way to “win” her is to intimidate everyone else around him because he’s the strongest and therefore most worthy of a beautiful woman. No one loves her for who she is; both love her for what she represents about themselves. This isn’t light-hearted; this is part of the problem when it comes to the perils of dating. I want to grab Katrina and tell her to go adopt a baby and get a puppy. With options like these, she really needs to strike out on her own and find someone who isn’t going to treat her like an object.