Warning: count(): Parameter must be an array or an object that implements Countable in /homepages/45/d96662078/htdocs/clickandbuilds/TheBackseatDriverReviews/wp-includes/post-template.php on line 316
↓
Home→Horror→Necessary Evils: The Role of Sacrifice in Holidays

In the throes of a stomach bug, I sat down to watch 2016’s Holidays. I know, not the wisest move from someone trying not to puke, but horror fans are a breed unto themselves. I have to be honest: I enjoyed the living hell out of this film. I liked that it didn’t bother us with a cutesy frame story – instead, we got cards to mark the occasion after each entry. It really was a bit like cracking open a book and reading up on the dark side of what we normally perceive to be a joyous occasion. Most interesting out of this for me was the running theme throughout each vignette. You see, each holiday had something associated with it, whether it seemed like it or not. I’m talking about the concept of sacrifice, and the necessity of either bodily giving something up or relinquishing mental faculties in order to complete the holiday cycle.

First, let’s look at what each of the eight segments wants us to give up, one by one, with accompanying results: 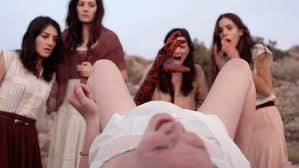 And I thought the aftermath of a burrito was bad.

The thing is, most holidays – even the ones we cherish with pure childhood memories – have an element of sacrifice involved, either directly or indirectly. Valentine’s Day, for example, came about thanks to the memory of St. Valentine, who isn’t remembered for chocolate and love; quite the contrary, he was martyred, which is a nice way of saying that he was executed under religious pretense. In fact, Valentine was killed for attempting to convert Claudius II; he was executed for telling someone to abandon his way of life in order to achieve a sense of salvation. In a similiar vien, St. Patrick’s Day doesn’t involve the death of snakes; it involves the conversion of pagans to Christianity, which is another way of asking someone to give up one way of life (the so-called “wrong” way) in order to embrace another (the new control method for the Celtic peoples). Easter stays with the religious theme, but tackles a different facet: it asks an idealist to submit to capital punishment in order to provide a type of spiritual redemption for his followers in what is quite possibly the worst job on the planet. Stories abound with the suspension of disbelief in Easter, from the notion that someone could rise up after death to the story of the doubting Thomas. This sense of sacrifice carries over into Mother’s Day, which we didn’t nationally get until 1908 thanks to Anna Jarvis rallying for a day to thank the woman that gave up so much for you. In fact, the notion of maternity rises so many issues of sacrifice, from identity to food to body, as some women were (and still are) forced to give up bodily control as they became vessels of the next generation of taxpayers and soldiers. Father’s Day started in the Middle Ages in Europe as a way to honor St. Joseph, who was pretty much coerced into raising a child that wasn’t biologically his. Giving up your pride to raise someone that’s not related to you? That’s a tough deal that some people can’t get over; of course that’s getting its own place of honor in a patriarchal society. Halloween was the festival of the dead, during which foods such as meat were abstained from, and those souls we had to give up were remembered and honored. Christmas, despite that it covers the supposed birth of Christ (which is probably closer to April), is closer to the festival of the Winter Solstice (also known as Yule), which held a sense of rebirth and therefore meaning that life had to dim before it could begin again. And in that same sense of winding down – that quiet relinquishing of light, literally – the year concludes with New Year’s Eve, which isn’t what it seems on the surface. This is frequently known as Saint Sylvester’s Day. Why is this significant? He’s the one that had personal audience with Emperor Constantine, and is the one that some say cured the emperor’s leprosy. It’s the giving up of a perspective-changing sickness to begin anew. In each instance, something must be given up and/or accepted in order for life to continue onward. The change is rooted in something spiritual or mental that results in physical change as well. 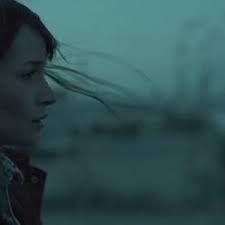 The same is said for the characters we encounter in this anthology, though the results vary for all involved. The bodily change is accompanied by a mental one, making this a truly transformative experience, which includes an element of horror. In the case of Max in “Valentine’s Day,” she finally stands up to the girl that cruelly bullies her and takes charge of her crush on her coach. Elizabeth of “St. Patrick’s Day” has to let go of the imagined existence of having a baby – her perceptions of the ideal – in order to birth a snake, choosing instead to subject herself to physical agony and social isolation to finally meet her and recognize her child as beautiful. “Easter” sees our small heroine question both the nature of Christ and the existence of the Easter Bunny before she violates the social contract and must take the place of Christ, equating the end of childhood to a life of service and crucifixion. Kate, while forced to carry a child she didn’t want in “Mother’s Day,” has the life within her brought to term, birthing something strong once her pattern of abortion is stopped. Kate surrenders her trust to the voice of her father in “Father’s Day,” following that sense of parental longing, proving that we sometimes are willing to place ourselves in harm’s way in order to win the affection of a long-departed loved one. “Halloween” gives us a man that is confronted with the misogynistic way he treats women, and the rebellion staged to regain independence and a sense of pride. “Christmas” demonstrates the depths to which one is willing to sink in order to make the holidays more magical for your family. And in “New Year’s Eve,” we get a murderer that dies at the hands of someone more vicious, extreme and able to blend in than him; what should have been a match made in heaven turns out to be the date from hell, with only one clear winner in sight. Each of these dates causes a mental and physical shift, and it’s something many of us have to face in one form or another. Sometimes, we have to stand up against those that make our lives hell; sometimes, we need to let go of the parenthood experience, whether it’s the child we envisioned, the circumstances we wanted, or the presence of a parent. Childhood ends; sexism is confronted. Sometimes, we have to do things we don’t want to. And sometimes, we’re bested in the dating world. All valid lessons. 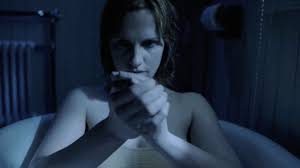 The road to motherhood is a weird one that defies all expectations.

Some did not enjoy this film; personally, I found “Easter” and “Father’s Day” to be the most effective. For some, this is just a movie; like the holidays they echo, it’s just something you show up to, smile through and go home once the end is reached. But for others, it’s a chance to contemplate. It’s a chance to transform, to look within yourself and address what’s going on at these major pinnacles. And if you’re lucky, it has a better ending than it does for our characters.