Warning: count(): Parameter must be an array or an object that implements Countable in /homepages/45/d96662078/htdocs/clickandbuilds/TheBackseatDriverReviews/wp-includes/post-template.php on line 316
↓
Home→Comedy→Weekend Movies: Five Reasons to Watch Three Amigos

Westerns and I are not known for being close bedfellows. I’m not entirely sure why, but I’m guessing it has something to do with the romanticizing of taming the American West in the face of the pain and degradation caused to the Native Americans (who remain, to this day, one of the most victimized peoples on our lovely North American continent). There is one, however, that can get me to sit and watch it every time: 1986’s Three Amigos. It’s the story of three silent film stars that get mistaken for real-life heroes and are roped into a turf war between a poor Mexican town and an overlord. If you’ve seen it, you’ll know it’s a blast. If you haven’t, here are five reasons to watch it this weekend.

I love the guys together. Martin plays Lucky Day; Short is Ned Nederlander; Chase is Dusty Bottoms. These silent film stars are spoiled yet well-meaning. Watching them realize what they’ve gotten themselves into is magic, as they criticize and try to find a way to help the poor people of Santo Poco. Equal parts muttering, “You idiots!” and cheering them on, you’ll be on board with them in no time flat.

Want to get depressed? Go to Google and search “Mexican gang violence.” This is a major fucking problem. Good people are still getting coerced, injured and killed on a daily basis. Even scarier? The police and the gangs are in the same boat between the abuses and public fear. Before you say anything, yes, as an American, I know that’s a bit like the pot calling the kettle black; I’m aware of this. It doesn’t stop me from wanting a better life for suffering human beings. Bearing that in mind, it’s nice to watch a film where people don’t feel up to the job, but help anyway because they hate seeing that, too.

In order to find the notorious gang leader El Guapo (Alfonso Arau), our three heroes need to go on a quest. They have specific instructions. They fuck it up spectacularly. I can’t go into more detail than that; just watch it and be amazed. And cringe a little bit if you know that you’d mess up the exact same way. If you’ve seen this before, you’re probably thinking of the exact same thing I am.

I couldn’t resist throwing a Gomez song title in there. Bite me. Some of the best scenes in this film take place in the same bar. Never underestimate the fun goings-on at the local watering hole, from show tunes to shootouts. The real prize goes to Fred Asparagus as the put-upon bartender. I’d hide too, dude.

John Landis – who’s often known as a horrormeister – directed it. Lest you forget, he’s the same guy that gave us National Lampoon’s Animal House (which I can see recommending in the near future). Steve Martin, Lorne Michaels and Randy Newman wrote it, and worked together on Saturday Night Live back when it was good (you can never replicate the magic of Garrett Morris and Dan Ackroyd as far as I’m concerned). It’s funny, so just go in and laugh. 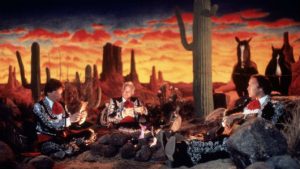 Yeah, I’m humming looking at this.

What are you waiting for? Head on over to iTunes and rent it!