Warning: count(): Parameter must be an array or an object that implements Countable in /homepages/45/d96662078/htdocs/clickandbuilds/TheBackseatDriverReviews/wp-includes/post-template.php on line 316
↓
Home→Animated→No, I Do NOT Want To Build A Snowman: My Problem with Frozen

I hate musicals. Naturally, within the first two minutes of Disney’s Frozen, I was already pondering whether or not a fall from the balcony of the movie theatre would kill me or merely render me paralyzed and unable to escape the sheer madness of singing going on around me. Kidding aside, I just couldn’t get on board the love train that every other mom seemed to experience with this film. Yes, there was an impressive voice cast, and yes, the animation was crisp. It tried hard to be funny. However, that’s not my main beef with Frozen. No sir. You see, for a film that tries to place the emphasis onto the healing power of sisterly love, Frozen sure as hell manages to miss the mark by giving a a main character that has to base her existence on having a man in her life.

On the surface, the film doesn’t intend to go in this direction. At the climax, we find out that Prince Hans (voiced by Santino Fontana, who won the jackpot in the name department), suitor to Princess Anna (Kristen Bell), has been in it all along in order to get a chance at the crown, leaving the princess absolutely crushed at the realization that he wasn’t into her while she formed an attachment to him. Anna wants to marry this guy, and hopes that his love for her will save her from a life-threatening curse; the disappointment she feels is acute and visible to the audience. Romantic love, though, isn’t what saves her from certain death; it’s her sense of attachmetn to her older sister. In order to save her sister, Queen Elsa (Idina Menzel), from harm, Anna leaps in front of her, blocking a killing attack. In turn, Elsa grieves the loss of her sister and kisses her, which ultimately provides the “true love’s kiss” needed to heal Anna. The moving part comes when the queen and princess realize that their love for one another is what saves the day – not a prince’s kiss, as traditional Disney cannon would have it. It’s love outside the box (please forgive me for that horrific pun). It’s feminist, it’s a good example, it’s uplifting. Swell of music, with the throng of children rushing out to buy dolls of their progressive idols. 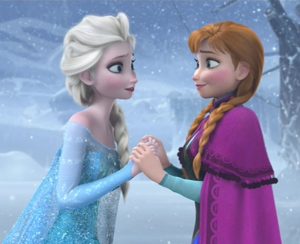 The problem? Like it or not, Anna needs to have a man around in order to complete her, which defeats the progress of the ending.

Anna can’t be without a man. This is a character that is so hungry for affection that she accepts a marriage proposal from a virtual stranger in order to fill the void of having someone special in her life. It’s worth noting that Anna doesn’t seek out friendship immediately upon the doors opening to the palace, which limits the nature of her companionship. Anna isn’t funcitoning under the guise of finding any old person with which to spend time; she’s not happy finding another woman to braid her hair and attend various functions around the kingdom. The eighteen-year-old Anna is experiencing the impulse to pair up with a member of the opposite sex. As adults, we can recognize this as the beginnings of a sex drive. This isn’t necessarily a bad thing: it’s part of normal human development (sidenote to our asexual readers: this isn’t meant as a statement against your orientation; it’s meant as a slam against the traditional, socio-religious notion that women can’t feel sexual attraction until there’s a ring on it). On the surface, it appears as though our ending cures her of the need to wrap up her identity as part of a “we” as opposed to just being herself: she doesn’t wind up married at the end of the film, and is having a ton of fun with her sister around Arendelle.

Enter Kristoff (Jonathan Groff), stage right. Throughout the film, Kristoff wrestles with a growing attraction that our storytelling tropes tell us is close to love. Kristoff argues with Anna; he assists her on her quest to save her sister; he attempts to honor her wishes in order to ensure her happiness. He even talks himself out of kissing her in order to honor her engagement, displaying a sense of chivalry and respect toward the young woman’s social standing. The audience recognizes this as the actions of the man that is going to win the heart of the heroine; we like him, and we’re happy that in the end, he’s beaming with love and pride as she finally kisses him. This is where things start to go sideways: the writers could have just left this alone. He could have been a good friend, proving that men and women can actually be platonic pals. Hell, his character could have been a plucky young girl that helps the spirited Anna find and redeem her sister. Either option would have reinforced the notion that a man (or any type of romantic attachment) is not necessary to ensure a personal sense of completion and happiness. That’s not the middle or the ending that Disney gives us, however. It has to make sure that the ends are tied neatly, and that Anna has a mate to take care of her romantic needs because this is what’s expected of our girls: we want them to marry and have babies because that’s apparently the one true way to happiness, regardless of what the individual may want. Anna gets the preconceived notion of love as the closing action of this film, telling the little girls watching this film intently that the only way they can truly feel complete is by having another person with them. It’s not enough for her to have a good relationship with her sister or function as an ambassador to disadvantaged youth – you need to be paired off in order to achieve the social ideal of happiness. You can package it up in bright, snowflake-adorned wrapping paper, but it doesn’t make the message any less clear: in order to be happy, Anna needs a man. She can have the love of her sister, but in order to reach the pinnacle of happiness, she needs Kristoff and his kiss. She needs that romantic love to reach the apex of self-worth. Think it can’t be done, that we need the romantic element in order to have a good story? Go back and watch Big Hero 6, which has zero romantic subplot and a lot of substance in terms of dealing with grief. It can and has been done, and done well at that. It’s just a matter of what values you want to sell to your kids: social norms, or the chance to be an individual.

The bottom line is that Anna requires a romantic relationship to define her happiness, which is in direct conflict with those that trumpet the feminist elements of the film. While it’s beautiful and moving that the love of one’s sister can save the day, it’s worth noting that this element must be included in order for the audience to feel a sense of closure with the story. The story would have been just as moving – if not more so – with the absence of Kristoff in favor of platonic female companionship; that’s crafting a story with depth rather than relying upon stereotypes. It’s insidious in this respect. The question then becomes one with which a growing number of adults grapple: do we really need someone else to make us happy? Is romantic love necessary to find a sense of fulfillment? And when do we get to start showing our kids that you can be just fine without defining your sense of self-worth via another person?