Warning: count(): Parameter must be an array or an object that implements Countable in /homepages/45/d96662078/htdocs/clickandbuilds/TheBackseatDriverReviews/wp-includes/post-template.php on line 316
↓
Home→Gender→Not Without My Pussy: Genitalia and Power in Black Mirror’s USS Callister

**WARNING: SPOILERS AHEAD FOR THE SERIES 4 PREMIERE OF BLACK MIRROR**

Oh man, Black Mirror has really pissed some people off lately with the advent of series 4. The introductory episode of the season, USS Callister, has made Star Trek fans upset because they think it’s shitting on their fandom. It’s also drawn the ire of men who see it as an attack on gamer culture, as it features a villain who abuses others around him in the name of being a misfit loner who seeks dominion over a world of his own. While I found the episode to be a bit more drawn out than it could have been (we could have easily shaved down 20 minutes of run time), I did find its pointed criticism of sexual assault and power to be quite valid in a time that’s seeing a rise against coercion, intimidation and violation. Curiously, this examination comes down hardest on a detail mentioned in the episode: once cloned and uploaded into the secret virtual space, the crew members of the USS Callister lack genitalia. 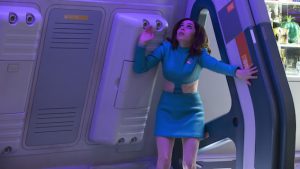 In space, no one can hear you pee.

The dynamics of Robert Daly (Jesse Plemons) in the real world are enough to evoke some pity from the audience before we hit the twist that he’s a monstrous control freak. Daly is meek and plays second banana to James Walton (Jimmi Simpson), the CEO of the company he helped found. There seems to be a romantic spark happening with Nanette Cole (Cristin Milioti), but it fizzles instantly into pleasant colleague banter as it turns out she’s more than just the new love interest for him – she’s a person who just doesn’t feel attracted. Office worker Shania Lowry (Michaela Coel) even writes him off as being creepy, and he doesn’t do much to dispel this perception: he lurks around, staring at people and muttering directives, which comes off as a submissive personality that could use some pointers on human interaction. At one point, Walton tells him, “You’re CTO. Don’t ask anybody anything. You should be telling people things like I’m fucking tell you right now.” We feel badly for a few moments because this is clearly a hurting, lonely person. That is, until we find out that Daly not only has his own demented version of The Sims in Space, but that he’s done so by cloning his colleagues without consent (with absolute memory of their previous lives) and placing them into a world with no escape, where he is in complete control.

No sympathy for you.

When I say complete control, I mean Daly manages to micromanage and rule even the bodily functions of his crew. When Cole refuses to go along with her scripted role, Daly removes her goddamned face, giving her the sensation of suffocation. Everyone knows that this action won’t kill her – rather, it’s going to cause her discomfort and mental distress until she submits. He doesn’t try any other form of conditioning first – no offers of candy or privilege, but goes straight to her ability to breathe, a fundamental bodily function. He knows it won’t hurt her, but will make her suffer mentally. To jump immediately to this level of punishment speaks to a need to control and abuse on a level that eradicates all sympathy for this character, which is where we’re led as an audience. We may have felt some shred of pity for him before, but after witnessing this display, we know that Daly is cruel and does not deserve anyone rooting for him. And that’s not even the half of how controlling he is. 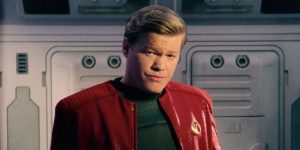 In one of the most chilling sequences of the episode, we learn that the clones aboard Space Fleet are, to paraphrase Dogma, as anatomically impaired as a Ken doll:

Shania: You get used to it. There’s no tongues. If that’s any consolation, there’s never any tongues…. It’s not like it can go beyond kissing anyway… Oh, never noticed?

Walton: (showing her the lack of genitalia): There’s no genitals in Space Fleet. This is a wholesome universe.

Shania: We’re all the same. Don’t believe me, take a look down there.

Walton: We’ve tried grinding our mounds together out of sheer boredom. No sensation at all.

Shania: Can’t even shit. Can’t even have the basic fucking pleasure of pushing out a shit.

The sequence does not last more than a minute or two, but it’s extraordinarily telling. It’s not enough that Daly demands kisses of his female captives – he must control the bodily functions of them as well. Walton describes the setting as “wholesome,” but this extends beyond a sense of morality. This is another demonstration of absolute authority and control, to the point where not a single imported crew member has control over sexual and excretory matters. The action of Daly not allowing his crew to have genitals is typical of the power dynamic of rapists: it’s not about sex, it’s about having the upper hand over someone else’s body. Even the fleeting sensation of taking a satisfying dump is denied for these individuals because it could be used to give pleasure when Daly is the one that holds all keys to that reaction. It’s no longer implying to the female crew members that they’re bitches that need to bow down to him – it’s denying them access to their own bodies period because he controls that. It’s denying the male crew members the chance to have sex with anyone in closed quarters. It’s that these people can’t masturbate or enjoy the sensation of peeing after a long time waiting. It’s making sure that no one has a good time but Daly, which is the very definition of a self-centered abuser, only taken to the most extreme form. It’s a way of saying, “If you’re going to exclude me from your fun, I’m going to make sure that you can’t even have the tiniest of human pleasures.” And this gets written off as wholesome, because hey, no one is getting penetrated. 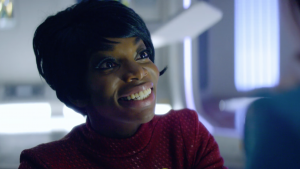 But not for Cole. Her battle cry is, “Stealing my pussy is a red fucking line. We are gonna get this bastard!” She could have used any other terminology: she could have referenced her vagina, her whoo-ha, her waterslide of life, you name it. But she used “pussy,” a term that’s been associated in the past year with hats for women’s rights and a Russian feminist rock band; it’s been reclaimed from an insult used by meatheads to a war cry of empowerment. It’s not that Cole’s not getting raped – it’s that Daly makes the decision that she doesn’t even merit access to her own body to perform maintenance functions, much less hold dominion over who she consents to fuck her. That moment of rebellion doesn’t come when she can’t breathe – it’s when she can’t piss, shit or fuck in any capacity like a regular human being. It’s a defining moment in how far you can push control of a person: dehumanize someone to the point of taking away biological capabilities and very real concepts of consent, and you have a mutiny on your hands.