Warning: count(): Parameter must be an array or an object that implements Countable in /homepages/45/d96662078/htdocs/clickandbuilds/TheBackseatDriverReviews/wp-includes/post-template.php on line 316
↓
Home→Beautiful→Weekend Movies: Five Reasons to Watch The Shape of Water

The Shape of Water has something odd going for it: it’s been playing in various places while remaining absent in others for some time. For example, it came out in limited release in the U.S. in early December, then got a wider release Stateside later that month. Our friends in the U.K., I’m told, will have to wait until around freaking Valentine’s Day to see this film. So is it worth that wait? Yes. Here are five reasons to sprint to the theatre to see it when it’s near you. 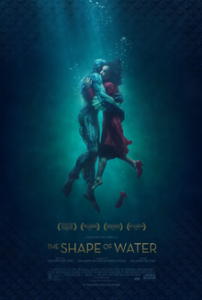 #1 – Sally Hawkins doesn’t even have to talk

Rarely does an actor captivate you to the point of not having to utter a single word to leave you spellbound. We joke sometimes that we could listen to someone read the phonebook, but dammit, Hawkins takes her performance in the film beyond this level. You should pay money to watch her emote without having to speak. While people fawn over other actresses, Hawkins has been busy knowing her shit. She owns this damn movie and you won’t be able to take your eyes off of her.

We all have that one special dick in our lives: the person who is obsessed with appearances, who doesn’t care who they step on, who wants to project the outward image of being the best while anyone with eyes can see that they’re the fucking worst. Shannon is next-level prick in this film. He’s equal parts product of his time and genuine asshole. The actor has probably earned himself some people that hate his guts for years to come, he’s that good. The portrait he delivers, when paired with the writing, provides a masterclass in the art of getting into the head of someone like that, which is fascinating from a sociological study. After all, knowing your enemy helps you defeat them. 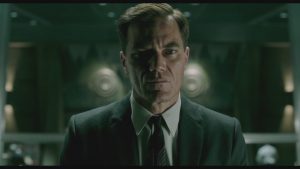 Two main qualities of Amelie are present in this film: the attention to colour, and the music. I can’t help but wonder if Guillermo del Toro wasn’t watching this during the drafting process, because the influence here is undeniable. Not that the influence is a bad thing – by all means, if you’re going to tip your hat to a film, especially a romance, make sure it’s a good one. The result is a film that looks and sounds beautiful. It’s as though del Toro plays to the best strengths of his heroine: sight and hearing. All I’m saying is that this would make for one hell of a double feature.

Yes, I realize that my reasons are performance-heavy so far, but there’s damn good reason why Spencer is her own reason to watch this movie: she’s charming, she’s real, and her delivery is packed with reasons to make you feel. We experience her indignities with a clenched jaw, and we get angry on her behalf. She’s full of sass and heart, and it’s enough to make you wish that you had a friend like Zelda. She has some of the best lines, and the character would not have had the same impact had someone else played her. 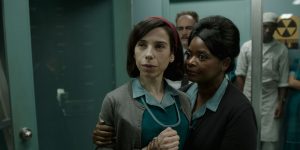 Zelda is the best.

We live in harsh times and want the comfort of stories because the commentary is too real sometimes. Exhibit A: how in the fuck did Get Out get nominated for a Golden Globe for best musical or comedy? Did I miss something? Was there a musical number or a gag that slipped by me? Because this film was a searing piece of commentary that’s much needed in our world, and it wasn’t driven by songs or jokes in the least. I digress, however. Point is, we like fairy tales that make us feel better and distract from some of the heavier stuff going on. And what better way to reassure yourself than a tale of acceptance. We live in a bad place; it’s nice to think that out there, someone exists that doesn’t see a broken mess of a person, but something whole, perfect and beautiful. And that’s okay – it’s not a slam against this film. Sometimes, we need that reassurance that there’s something beautiful waiting for us. Like a lotus, there’s beauty at the end of a mountain of shit.

Go see The Shape of Water if it’s by you. If it’s not playing yet, it’s worth the wait.