Warning: count(): Parameter must be an array or an object that implements Countable in /homepages/45/d96662078/htdocs/clickandbuilds/TheBackseatDriverReviews/wp-includes/post-template.php on line 316
↓
Home→Gender→Outgoing Transmission – Dax

I’ve mentioned in my bio that I am a fan of the four Star franchises: Wars, Trek, Gate and Search (as said by the Comic Book Guy from The Simpsons).  My favorite is Star Trek.  I grew up on The Next Generation, my favorite is probably Voyager, but we’re here to talk about Deep Space Nine.  I have been told by others that I may be stretching it a little when I try to argue that Dax is a representation of a Transgender character or at least the best representation of one we had in the 90s.  But I’m going to make that argument now. 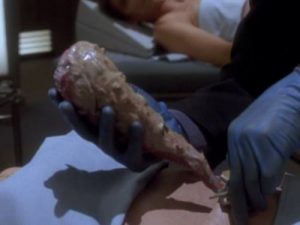 For those of you not familiar, Dax is a symbiont who needs a host body to survive.  The symbiont cannot survive without the host, and the host gets the unique experience to live longer than their body through the symbiont.  Both host and symbiont are considered part of the Trill race, or culture.  Typically the host will take the surname of the symbiont, so if we are talking about Jadzia Dax, Jadzia is the host, and Dax is the symbiont.

The first episode of Deep Space Nine is mostly told through the eyes of Benjamin Sisco (Avery Brooks).  When we meet Jadzia (Terry Farrell) we find out that she  and Sisco have been friends for a very long time.  However, when Sisco knew the symbiont, it was in a male host named Curzon.  Curzon Dax had been a mentor to Sisco and had passed away about 2 years earlier.  Throughout the series, Sisco refers to Jadzia Dax as “Old Man”.  This is one thing I think would be different if Deep Space Nine was a modern show and Dax was analogous to being Transgender.  The misgendering of Dax, even though it is meant affectionately, is not something one should do to someone who is Transgender.  Using incorrect pronouns or even worse “dead naming” (the act of using someone’s name pre-transition) is seen as invalidating a Trans person’s identity. 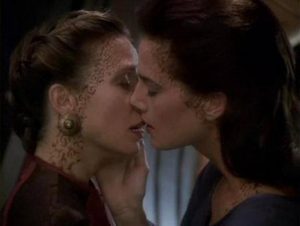 The fourth season episode “Rejoined’ is a bit of a milestone in a few ways.  In this episode, Jadzia meets the wife of one of the symbiont’s previous hosts, who has also been joined to another host.  Lenar Kahn (Susanna Thompson) and Jadzia spark up a romantic relationship, which is taboo in Trill culture, not because they are both in female hosts, but because of their previous hosts’ relationship.  It’s done in a way in which Star Trek prides itself, but it’s nice to see that the lesbian part of the relationship isn’t looked down on while still showing that prejudice in the episode.  The episode was well-known for being one of the first lesbian kisses on TV.  Obviously, there is a big difference between being Transgender and being gay, but this was one of the best representations of any LGBT issues on television, except for maybe Ellen, but her coming out was still a couple years away when this episode aired, and her show didn’t fare well from it.

In the last season of the show, Dax is moved to a new host, Ezri (Nichole de Boer).  While Jadzia was about 2 years into her transition with the Dax symbiont, Ezri is brand new.  To top it off, unlike most hosts, Ezri is not properly trained to be a host.  She takes on the symbiont as the only Trill able to carry it after Jadzia dies.  We see a lot of the coming of age that one has when transitioning into a new identity.  She gets lost and confused as to what separates her from the symbiont, which raises a lot of questions about what is identity, which I know I’ve personally struggled with.  She has difficulty working alongside Jadzia’s old co-workers, who are still working through the grief process. 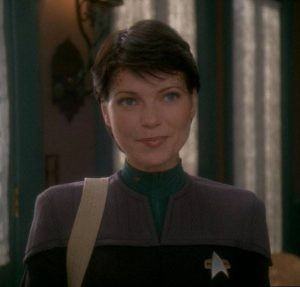 When Jadzia dies, her husband Worf (Michael Dorn) doesn’t want anything to do with Ezri.  This is also very similar to some Trans people’s relationships.  When they begin to transition, their loved ones are not sure that they are the same person (see my post on The Christmas Invasion).  Ezri is left feeling confused as she knows she’s not Jadzia, but feels like her at the same time.  I’ve been lucky, as my wife is sticking by my side, and my friends and immediate family are doing the same.  I still have empathy for those who have more difficulty with this.

While I was not really aware of what Transgender meant until about 2000, 1993 was probably the first time I was introduced to a character who had once (actually 4 times depending on how you count) been a different gender.