Warning: count(): Parameter must be an array or an object that implements Countable in /homepages/45/d96662078/htdocs/clickandbuilds/TheBackseatDriverReviews/wp-includes/post-template.php on line 316
↓
Home→Comedy→Weekend Movies: Five Reasons to Watch Black Dynamite

I first saw a trailer for Black Dynamite about two months ago and thought, “Huh, I should watch this.” Way led to way and it went to the backburner. A few of my friends suggested last week that I watch it, so I did. GUYS. THIS IS THE BEST. I’m surprised that I’m limiting myself to five reasons to watch this. Here are only five reasons (in a moment of restraint) to watch it this weekend. 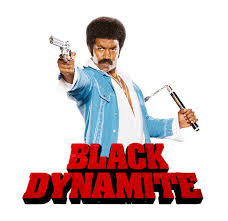 There were more times when I knew exactly what was going to be said long before anyone even uttered the words. I am happy to report that you know where it’s going in the most delightful way. Instead of feeling annoyed, you cackle and congratulate yourself on your cleverness. Or is that just me? Nah. We all do it. You’re amongst friends.

Black Dynamite is not content to merely have music in key points. Everything must have a soundtrack. EVERYTHING. From walking down the street to epic animated love scenes to action sequences. The music is near-constant, and it’s good at that. Electric guitars with wah-wah pedals (for which I am a giant sucker). Horns. Thumping percussion. The result is that the film has its own groove, and damn does this film have moves. I want a soundtrack like this to follow me around, if only for a day.

#3 – Every Blaxploitation trope is included

Brothels. Crime. Drug addiction. A suave leading man that gets all the chicks. A fierce leading lady with glorious natural hair. Pimps with canes. A larger conspiracy that threatens the greater Africian-American populace. Undercover cops. A dead family member that needs to be avenged. An aunt raising our lead character after the untimely death of his mother. Epic fight scenes. Kung Fu. Fashion as far as the eye can see. It’s all here, piled higher than a drag queen’s hair. It is amazing and beautiful and I think I want to cry from how awesome it is. 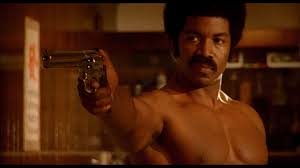 #4 – The shots and transitions

If you’ve ever watched a movie from the 1970s that had an overzealous editor, you know how busy it can get. Multiple angles on one screen. Fades in and out. Constant shot/reverse shot method in quick succession. Borders. Slow motion. I could keep going, but you get the picture. Think of it like an editor’s version of throwing in every last feature that Power Point has to offer. Let’s just say that Black Dynamite does not disappoint.

Michael Jai White plays our lead character, and he’s a great leading man. He’s a helluva lot of fun to watch. However, he’s not the only face you’ll recognize. I screamed when I saw Tommy Davidson, whom I still remember from In Living Color. Arsenio Hall’s in this too. We’ve also got Kevin Chapman (Rescue Me), Mykelti Williamson (Forrest Gump), Nicole Sullivan (Mad T.V.), and Cedric Yarbough (Reno 911!), amongst others. It’ll feel like a trip down memory lane. 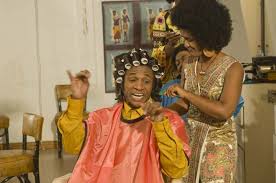 Seriously, just shut up and give Amazon your money for this one.