Warning: count(): Parameter must be an array or an object that implements Countable in /homepages/45/d96662078/htdocs/clickandbuilds/TheBackseatDriverReviews/wp-includes/post-template.php on line 316
↓
Home→Uncategorized→Outgoing Transmission – My Girl

When I watched My Girl recently, my wife asked why.  I told her I was going to do an article on it.  She gave me look, and I explained that it is probably the coming of age story I identify with the most.  I got another look, and told her to just wait and read the article.

My Girl is a story about Veda (Anna Chlumsky) and her best friend Thomas J. (Macaulay Culkin).  Veda lives with her father, Harry (Dan Aykroyd), who is a funeral home director.  Harry hires Shelly (Jamie Lee Curtis) to be the cosmetologist at the funeral home.  The story focuses around two relationships: that of Veda and Thomas J., and the one between Harry and Shelly.  In the end both Veda and Harry have to face their issues with death.  Veda’s mother died in childbirth, and I think it’s pretty clear that Harry really only starts to move on when Shelly shows up.  Veda has to face Thomas J.’s death, while Harry has to help his daughter with the grieving process, knowing that his typical canned responses aren’t going to help her. 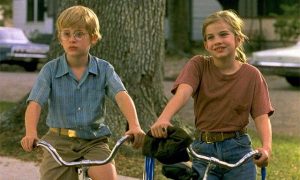 Growing up, my closest friends were usually girls in my neighborhood.  Most of them could be considered tomboys, and in retrospect we probably passed each other on the gender spectrum.  When I moved to the country, there were a lot less kids close by, and I became best friends with a girl named Melissa.  Melissa, like Veda, was a tomboy.  I remember at least two summers we spent climbing trees, hanging out by the pond, and doing other outdoorsy stuff. 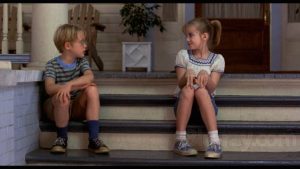 Melissa had a crush on Macaulay Culkin, and loved this movie.  The friendship between Veda and Thomas J. reminded both of us of our own friendship.  She would have nightmares, where I would befall a similar fate to Thomas J. (I may be afraid of bees, but I’m not allergic to them).  We were the same age, and our lives were very similar to Thomas J. and Veda.

When Thomas J. dies, Veda goes to the doctor and tells him that she can’t breath because of all the bee stings.  She is very empathetic to what happened to her friend.  I remember doing similar things for Melissa.  When Melissa fell out of the tree in her front yard (at least 10-15 feet up, but seemed much higher as a kid), she broke her arm.  I wanted to break my arm so that we’d both have casts together.  When Melissa got glasses, I too wanted to have glasses.  I even remember writing my mom a note, to tell her I thought I needed them.  20 years later, I still don’t wear glasses, though I probably should.

Veda is picked on by other girls because she hangs out with Thomas J..  Melissa and I had similar experiences in school.  However we were never in the same class, so while we didn’t see each other at school often, we did ride the same bus, and sat together every day.

At the end of the movie, we see Veda riding bikes while wearing a dress.  She has grown out of being a tomboy and into being a woman.  Melissa used to tell me that her being a tomboy wasn’t a phase, she wanted to have a sex change.  At a young age, I remember those words ringing in my head.  I don’t precisely remember how that made me feel back then, but I remember thinking about it myself.  I don’t recall having thoughts of being a girl that young.  I wasn’t crossdressing at the time, and I really had no interest in dresses or makeup.  In the end, Melissa did grow out of it.  As we entered middle school we grew apart.  Each gaining our own group of friends.  We moved on with our own lives, much like Veda does.

Now if you’ll excuse me, I need to ride off on my bike while wearing a dress.