Warning: count(): Parameter must be an array or an object that implements Countable in /homepages/45/d96662078/htdocs/clickandbuilds/TheBackseatDriverReviews/wp-includes/post-template.php on line 316
↓
Home→Animated→Weekend Movies: Five Reasons to Watch The Little Prince

Thirty-seven years before my birth, Antoine de Saint-Exupery published what was to become one of my favorite stories. I discovered The Little Prince a bit later on in life, but I was old enough to read the complexities and really appreciate what the work was saying. This is one of the books I consider central to my being. As such, I should have been scared when Netflix announced that it was adapting it, as this is something so close to my heart. I wasn’t nervous when it was announced that this film had an adaptation coming, though, especially as Netflix has a good track record so far. If that’s not good enough, then here are five reasons to give it a watch this weekend.

First thing’s first here: THE DUDE IS THE AVIATOR! That’s right: Jeff Bridges voices our Aviator, which is pure perfection. Also extraordinary: Marion Cotillard as The Rose, Ricky Gervais as The Conceited Man, Albert Brooks as The Businessman, and James Franco as The Fox (more on him in a little bit). This voice cast crafts what so many films try to accomplish and fail: a story. You won’t hear the actors; you’ll hear the characters in a way you would have imagined them as you’re reading the story.

Director Mark Osborne blended two types of animation for this film. The story of The Girl (Mackenzie Foy, who’s great) is told in computer-generated animation, something to which we’ve become accustomed in light of things like Minions, Shrek, and Frozen. So what makes this different? Osborne switched it up and selected stop-motion animation for the story of The Little Prince as told by The Aviator. It helps establish the story within the story, and the impact is such that it gives this tale a bit more weight. Sometimes, it’s okay to separate the two pieces of action in media. This is how you do it. 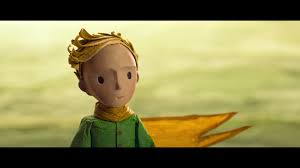 As a parent, I can attest that kids get a ridiculous amount of homework. It’s not just that anymore: society as a whole wants children to do things that are much older than their years. We want kids to be able to process complex emotions without teaching them about things like accepting disappointment; we want them to behave like tiny adults, with nary a tantrum. The simple fact is that childhood is a state of mind; being a large child isn’t always a bad thing, because being a kid at heart helps make sure that you’re a loving person that gets excited about things like it’s the first time. This film has some rather damning things to say about overworking a kid and expecting way too much from a child. I think we could all stand to use a lesson is stepping back and letting children be children.

The book calls out so many pieces of adult hypocrisy it’s not even funny. This film does that as well (see above), and it does something else that would normally piss me off: it changes some elements of the story. There’s more added to the strict version of Exupery’s book, and the thing is, it’s not bad. It takes the original story and takes it a step further. In lesser hands, this would have come off like poor fan fiction (keep your ass out of this, Stephenie Meyer), but writers Irena Brignull and Bob Persichetti give us something just as socially relevant. I’ll be honest, this was a major gamble. This one paid off.

Here’s something personal about me: The Fox is one of my favorite characters in literature. If I tell you that you’ve tamed me, it doesn’t mean that I’m meek; it means that you are so special to me that I can’t conceive of existing without ever having known you. The Fox articulates so well the sadness and joy that gets mixed into forming those types of attachments, as well as the inevitable, uncontrollable nature of loving someone, whether it’s as a dear friend or in a romantic sense. I admit that I went into this film with that meaning; however, it’s the execution that seals it in this film. Franco’s onscreen time as The Fox is not long, and there are some parts of his speech that do not make it in. However, for anyone who has ever lived the full extent of The Fox’s words, you will find it moving. For someone who sees herself as far more The Fox than The Rose, this will tug at your heart. 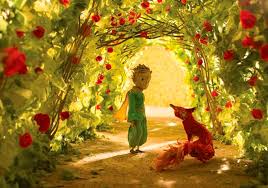 Do your inner child a favor and watch this on Netflix this weekend. We could all learn something from it.