Warning: count(): Parameter must be an array or an object that implements Countable in /homepages/45/d96662078/htdocs/clickandbuilds/TheBackseatDriverReviews/wp-includes/post-template.php on line 316
↓
Home→Gender→Outgoing Transmission – One of the Girls: Being Transgender and The Matrix

There are a lot of theories out there on The Matrix, and I like probably many of you, I’ve read a lot of them.  There’s Neo (Keanu Reeves)  isn’t the one, there’s Erin’s theory about Trinity’s (Carrie-Anne Moss) gender stereotypes in the movie, but one of my favorites is that The Matrix is a Transgender coming out story.  I’m going to avoid plagiarizing this article and only cover things more based in fact.

Let’s start with Switch (Belinda McClory).  If you are not aware the original version of the script, Switch was essentially Transgender.  The Wachowskis had originally planned for two actors to play Switch, a female for in the Matrix and a male for out of the Matrix.  This was apparently shot down by the studio.  However, Switch still has some gender neutral\non-conforming aspects.  It makes sense that if your perception of yourself is how you look in the Matrix, it would be possible for someone who is Transgender to appear as the opposite biological sex in the Matrix.  I mean hell, everything Morpheus (Laurence Fishburne) teaches is control of oneself within the Matrix.  It’s even said that in the Matrix, you’re a representation of your subconscious.  So, why wouldn’t someone who feels at their core to be female, not be female in the Matrix, despite their gender in the real world.  I guess that means I’m proof the Matrix doesn’t actually exist. 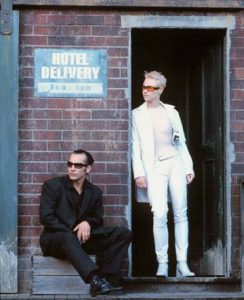 Erin pointed out in her article that while Trinity dresses similarly to the guys, she still fits into the femme role of the movie; Switch, however, does the exact opposite.  Switch is seen in the Matrix as a stark contrast to the rest of the characters.  She wears a white trenchcoat, yellow sunglasses, and her hair is bleach white, all in contrast to the rest of the casts black everything.  She is very androgynous both in and out of the Matrix.  While most of the other characters are a stark contrast with Switch, her partner, Apoc, is even more so.  He has an almost androgynous look himself, his long hair opposite her short.  I’d say it’s quite possible he is the male Switch pulled from the original script.

Since 1999 when the movie came out, both of the Wachowskis have come out as Transgender.  I don’t see how the original scripts portrayal of Switch couldn’t be considered as a portion of either siblings self-identity.  There is another part of the movie that bears a large part of one of the Wachowski’s souls.  Lana Wachowski has directly said that the scene in the subway, where Agent Smith tries to kill Neo by getting him hit by the train is pulled directly from Lana’s life.  If you have not seen her Human Rights Campaign award acceptance speech, I highly recommend it, she is amazing! 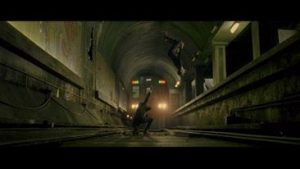 When she was a teenager, Lana wrote a suicide letter, and then almost threw herself in front of a subway train.  She was saved only because someone else was on the platform watching her.  This incident became the basis of the fight with Agent Smith, which the article on The Mary Sue I referenced earlier argues is the moment, “Neo is out as Transgender.  He’s accepting himself, and with that, he gains power and becomes at one with himself, the One.”

I feel the fact that both Lana and Lilly Wachowski are Transgender cannot be ignored when looking at The Matrix.  I mean, sure Cloud Atlas probably has more Transgender themes, but I feel since both of them were still in the closet when making it, The Matrix has a lot more to say.

I’ll leave you with this quote I adapted from the movie, which I thought was thought provoking and funny at the same time:

Do not try to bend the spoon.  That’s impossible.  Instead, only try to realize the truth. […] There is no spoon.  […] Then you will see it is not the spoon that bends.  It is only yourself.