Warning: count(): Parameter must be an array or an object that implements Countable in /homepages/45/d96662078/htdocs/clickandbuilds/TheBackseatDriverReviews/wp-includes/post-template.php on line 316
↓
Home→Feminine→One of the Boys: The Masculinity of Trinity in The Matrix

Thought I was going to go for Switch being transgender the minute I mentioned The Matrix, huh? Nope. I’m leaving that issue to Nika Black (we’ve talked about it, and she called dibs). What I’m interested in exploring is the way that Trinity (Carrie-Anne Moss) manages to walk the line between masculine rescuer/freedom fighter and feminine love interest. After repeat viewings, I have a theory: I think that Trinity is allowed to get away with behaving in a stereotypically masculine fashion because of the way she physically looks. In other words, she’s outwardly feminine enough to make her an object of desire, which gives her a pass on being one of the boys. 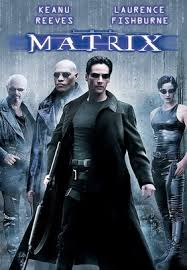 Make no mistake, Trinity is far from behaving like a girly-girl. Her actions border on masculine, in fact. The first time we hear her, she’s on the phone with Cypher (Joe Pantoliano), and the two engage in a teenage-type of “do you like him?” conversation, during which she dodges the question. When we first see her, she’s about to be arrested, and fights her way through police officers and Agents in a thrilling chase to escape. This isn’t a one-time thing: she participates in the rescue of Morpheus (Laurence Fishburne), disarms and/or kills anything that gets in her way, and saves Neo (Keanu Reeves) more times than he’d like to admit. She’s tough enough to shoot an Agent in the head, she can fly a helicopter, and she can jump across impossible lengths. It’s no wonder that Neo states that he thought she was a guy at the beginning of the film – the infamous Trinity does not behave like a typical damsel in distress.

Unless, of course, if you realize that her feminity gets emphasized throughout the film as it progresses. From our first shot of her standing, the focus is on her ass; make no mistake about it, sex is selling this character before she throws the first punch. The character initially plays the role of the femme fatale when she tells Neo in the club that “they’re watching you,” making her the sexy, mysterious woman with all of the answers so typical to film noir, even leaning in for a near-miss of a kiss with him. However, from there, we move into the struggle of her coming to terms with her feelings for Neo. She shifts and becomes helpful more so than a pure destruction machine that happens to be female: she convinces Neo to get de-bugged, she assists in getting Neo set up for the Matrix explanation once he’s been set free, and she brings Neo food after his intense training session. She offers wisdom as well when he is not in a state of mental ease, telling him, “The Matrix cannot tell you who you are.” She guides mentally as well as providing physical protection when he needs it, establishing her as a nurturing type. By the time that she gives her grand declaration of love to Neo, we’re not surprised that the dead man magically comes back to life. She’s made herself a dream woman to him: beautiful, able to hold her own in a fight, and with enough warm, gooey love in her heart to resurrect Neo from the dead. 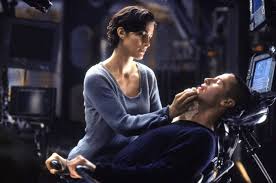 And that is where the formula of the character works so well: Trinity is tough enough to be self-sufficient, but still stereotypically feminine enough to make her soft and approachable. Switch (Belinda McClory) does not appear to be as cis-gendered as Trinity, which provides a stark contrast to this notion: as such, she is a bit more aggressive, and, ultimately, dies in the end. Trinity, however, has to wrestle with her feelings – this makes her a more intense fighter as well as an object of desire. Cypher tells her during the huge betrayal scene, “For a long time I thought I was in love with you. I used to dream about you. You’re a beautiful woman, Trinity.” Not smart, not tough, not indispensable – the key word he uses is “beautiful.” Likewise, there are parts where Trinity has to demonstrate a type of vulnerability in order to be less intimidating to the men around her. When the explosives are set up on the elevator, Trinity is hugged close to Neo as they ride the cable away from the explosion; note that it’s not her that does the shooting of the cables. She has to be the one to hold on to big, strong savior Neo. And while she’s given the ability to fly the helicopter, it’s Neo that has to save her once it crashes, literally holding onto her by a rope and digging in his heels to save her from death. Tough as she is, as the film moves further on, she needs him to save her, and when it’s time to repay the favor, she doesn’t do this by brute force or a gun fight: she does it by declaring her love and shielding him with her body when an EMP wave is deployed. In order to save the man she loves, she has to behave like the good little woman that she really wasn’t at the beginning of the film.

It’s acceptable to be a badass when you’re saving your man’s ass.

While one might think that Trinity smashes stereotypes, she really only goes about halfway on that racetrack. Yes, she’s tough. Yes, she shoots guns. Yes, she can kick your ass in hand-to-hand combat. But at the end of the day, she still needs a man’s strength to save her, and she can save those around her through her love. She is a successful at navigating that line because she looks feminine enough to blend in while reinforcing her gender role. We were so close with this one, gang. Almost.