Warning: count(): Parameter must be an array or an object that implements Countable in /homepages/45/d96662078/htdocs/clickandbuilds/TheBackseatDriverReviews/wp-includes/post-template.php on line 316
↓
Home→Animated→Outgoing Transmission – Voltron… You know, BEFORE Power Rangers

I remember liking Voltron: Defender of the Universe as a kid. However, I don’t remember ANYTHING about the original series.  I enjoyed the 1998 Voltron: The Third Dimension, but I was a sucker for horrible 3D animation on TV (like Reboot and Beast Wars: Transformers).  So recently when Voltron: Legendary Defender came to Netflix, I decided I needed to check it out.  If you haven’t seen it yet, I suggest watching it before reading this article as there is a minor plot point I will be ruining.

In Voltron: The Third Dimension, I recall liking Pidge because he was played by Billy West, and sounded exactly like Fry from Futurama.  So when I started watching Voltron: Legendary Defender, I really liked Pidge as well.  Pidge in this version is voiced by a female (Bex Taylor-Klaus), and looks very androgynous.  This made me like the character even more. 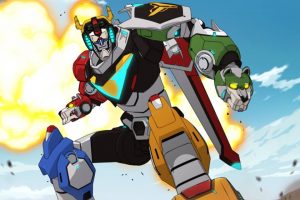 It needs to be said at this point, I watched most of the series one weekend I came down with a fever, and the majority was consumed with a fever.  So when I tell you that I didn’t realize Pidge was actually a female character until halfway through the fifth episode, it’s because I was sick.  I later went back and found out it is quite obvious at the end of the second episode.

Pidge is not really Transgender; she’s more of a Mulan character.  However, it is handled at points similarly as if she was Transgender.  The episode after we get Pidge’s back story, the group is talking about “manning up,” and Pidge stops and decides it’s time to come out to everyone: “Wait, I have something to say first. I need to come clean, and I’m afraid this may change the way you all think about me.”  This is a sentence that anyone who is Transgender can relate to: when we come out to people, we don’t know how they are going to react.  We can have a good idea, but we can’t completely predict the response.  She continues with, “Just so there are no secrets between us anymore, I can’t ‘man up.’ I’m a girl.”  You can hear it in her voice, it is not an easy thing to say out loud, but she gets it out.  She then says, “I mean, I can ‘man up’ because that’s just a figure of speech.  I don’t have to actually be a man to ‘man up.’ I just have to be tough.”  The humor of this awkward part of the conversation makes me laugh, as I’ve been there (I recently to my cousin, followed by her boyfriend an hour or so later).  After I told him, I didn’t know what more to say, so I just said, “Yeah, that’s it…”

Pidge does get some mixed reactions. “WHAT YOU’RE A GIRL?!” from a slack-mouthed Lance (Jeremy Shada). “I’ve known for some time, but I’m glad you’ve shared it with everyone,” says the wise Princess Allura (Kimberly Brooks). “Yeah I figured,” from Hunk (Tyler Labine), and “Oh yeah, me too,” from Keith (Steven Yeun). “Wait we were supposed to think you were a boy?” from Rys Darby’s character Coran. Lance’s reaction is the most over the top, but the cartoonish reaction makes it more funny than sad.  That’s it though, the whole thing is over just like that, and they move on to saving the day. 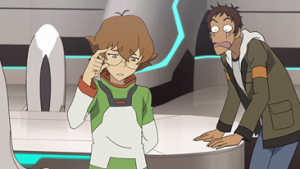 While I’ve had good reactions so far from everyone I’ve come out to, I did have my own Lance response (see The Christmas Invasion).  I know it’s impossible to hope for only positive responses, but now that all the really important people in my life know, I’m not worried about negative ones, I’ll just remove them from my life and move on.
-Stay Brave!