Some people hate Kevin Smith; I happen to really like his work. He’s got an honest streak to him that translates well into both the situations he crafts and the dialogue that goes along with it. In short, he’s fun, and he doesn’t really care what you think of his movies because he’s making them for him, to have a good time. That’s a great outlook. In that spirit, Zack and Miri Make a Porno is a film that doesn’t get the love it deserves. That changes this weekend. Here are five reasons to watch it if you haven’t already. 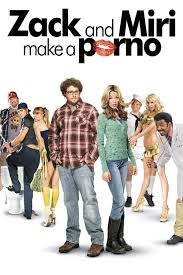 I wanted to dislike Seth Rogan at first, but the guy has grown on me, both in his performances and his persona. He started off as a bit douchy, but he brings an honesty in everything from tweets to screentime. I happen to really enjoy that he’s a bit closer to someone I’d date, as opposed to, say Chris Hemsworth (no thanks, man).  He also sounds like one of the guys I hang out with. It’s fun to see a guy that looks like one of my friends go off on a rant that one of my friends would go off on. His character Zack makes some really good points, too. From Paris Hilton to paying the bills, you can totally get on board with his sense of humor and candor. 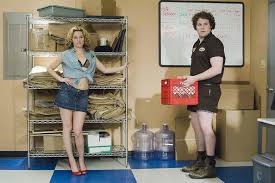 Too often in movies, sex scenes require perfect lighting and a moving soundtrack. There are tearful declarations of love, with nary a hair out of place. Nope. Not here. You get to see role playing, strap-ons, forced dialogue and really stupid situations. It’s also a lot closer to real life than most movies. Sometimes, you say something really stupid or you try something new. The response? You laugh. And that’s alright. This one helps you remember that it’s okay to laugh when you’re getting down.

Huge fan of Long right here. He can do everything from serious to romantic to scary. He’s just immensely likable. This role – as gay porn star Brandon St. Randy – has to be my hands-down favorite. His screen time is not lengthy at all, but it’s one of the most memorable things in the film. Any role that can walk off with an entire film that’s funny on its own is worth watching. Brandon can be my sherpa on the mountain any time. And yes, you need to stick around for the outtakes. I would never have kept a straight face.

I will not spoil this line if you haven’t seen it. Mind you, every time I literally put icing on a cake, I yell this. You’re probably never going to want to eat cake at my house ever again. 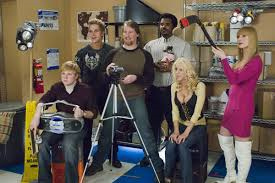 Just you and me and the camera crew.

This movie is available on Netflix for streaming. Give it a chance, or re-watch it this weekend.