Warning: count(): Parameter must be an array or an object that implements Countable in /homepages/45/d96662078/htdocs/clickandbuilds/TheBackseatDriverReviews/wp-includes/post-template.php on line 316
↓
Home→Gender→Participation Trophy: Sam, Rosie and the Lord of the Rings Problem

Funny story: I went to go see Lord of the Rings: The Return of the King with a pair of friends after a long day of teaching when it came out in 2003. I slipped into a pair of jeans to wear to the theatre, as I figured that would be more sensible than being in my dressy, professional teaching attire. They went in hobbit cosplay without telling me. I showed up and sat between two hobbits on a Friday night. The things I went through to drool over Billy Boyd, my friends. Fucking sucker for an accent. 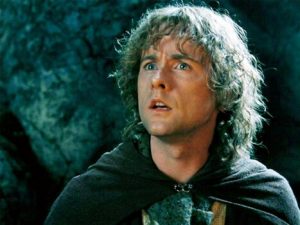 But said drooling leads me to a point: the odd hope that just longing for someone will get you a shot with said person is an enduring, if not completely troubling, concept. We see it all the time, across genders, from the use of trivia to get the girl in Ready Player One to Bree Sharp’s stalker anthem “David Duchovny”. While we can laugh and try to find it charming, it’s inherently toxic: the idea that simply showing up with the odd skill or vague hope will get you the object of your desire without actually doing anything to merit the type of undying love and devotion that’s earned through careful development and cultivation of a relationship with a flesh-and-blood human being that’s more than just a concept. And while it may have been different in the books, the Lord of the Rings films does not deviate far from this notion of getting a relationship as a reward for a skill or action in the form of Samwise Gamgee (Sean Astin) and Rosie Cotton (Sarah McLeod). 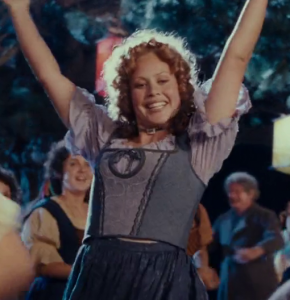 “And the first prize of Rosie Cotton goes to…”

When we first meet the pair in The Fellowship of the Ring, Sam obviously likes Rosie, but can’t muster the courage to interact with her. When Frodo (Elijah Wood) suggests he ask her to dance, he defeats himself by saying, “I think I’ll just have another ale.” It seems sweet and awkward at first – aww, look, the cute hobbit is too afraid to talk to the pretty woman! It takes Frodo shoving him into Rosie’s arms to get him in the general vicinity of the woman (to quote the Riff Trax crew on their brutal Twilight series riff, “kissing is like WiFi – you have to get in the general area…”). There’s no interaction between the pair in The Two Towers, but when the first of 14 endings of The Return of the King rolls around, we get a tearful Mount Doom confession from Sam that he would have married Rosie if only he’d had the chance and, later, after consuming beer, he musters the nerve to go talk to the gregarious woman after some time away. Cut to a scene of Sam looking like the prettiest bride in all the Shire, and there’s a happily ever after for the ages, complete with Rosie and a couple of cute kids waiting for Sam to get back from a final adventure.

Have to hand it to Astin, he looks way more excited than most men do on their wedding days.

Now in the books, Rosie and Sam had a pre-existing relationship – one in which Rosie kind of always assumed she’d wind up with Sam. Which is great and kind of sweet that she already knew he was The One, and while she wasn’t too happy that he hightailed it for a year to go prance about Middle Earth with Frodo, she stuck with him long enough to have 13 kids (my vagina just poured one out for you, Rose). However, in the film, we don’t get that – we see Sam barely rouse an awkward interaction with her before the big, life-changing trip, and then we see Sam guzzle beer before talking to her. That’s it. There’s no hint of talking beforehand, and no guarantee that a woman who was nice, vivacious and social would have waited around for a guy who had to be shoved into dancing with her. She literally does not date anyone after one dance he had to be tricked into during his absence, as though waiting for that cute guy to finally talk to her. That strips the original subtext of a woman committed to her partner and paints a entirely different picture. That completely changes the game. Rosie is no longer the one who waited for her beloved. Rosie becomes Participation Pussy. 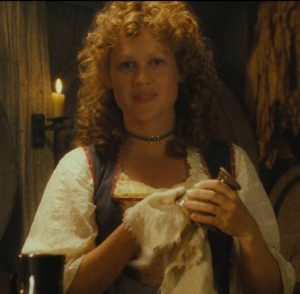 The girl of your dreams will literally be waiting  for you with a beer.

What’s Participation Pussy? It’s a demanded reward of a woman in either wife or sex form due to a skill or action that was undertaken/completed; it’s a sexual prize for participating in something. It’s the sex version of expecting to get a trophy for coming in 23rd out of 56 available slots in elementary school competitive sports. This skillset or achievement can range from knowledge of the writing lineup of DC Comics in 1987 to saving the Earth from certain doom to paying for dinner at the Olive Garden. We’re all too familiar with the reactions of guys who hear “no” when their request for said trophy is denied: the cries of “bitch,” “friendzone,” and “social justice warrior,” when in actuality, it stems from the fact that someone may require more than one broad action to seal the deal. You have to do more than just show up and demand someone fawn all over you. The other participant gets an equal say in what they get to do with their genitals.

And in the context of the films, my friends, Rosie is Participation Pussy. During the quest to destroy the ring, Sam is both a good friend and a steadfast, moral companion: the good man who never gives up. As a boyfriend, Sam sucks. He leaves for an extended time after not having spoken to this woman; he preferred to sit and drink than go talk to her (which is a massive problem in and of itself – really, it’s creepy when someone just drinks and looks at you). His lack of confidence is not her problem. There’s literally nothing bonding these two together based on the interaction we’ve seen, and for all she knows, Sam met an ultra-hot elf and eloped with them to Rivendell. Likewise, she could have met someone in that time frame – someone who she would have had to dump by this logic, who would then be screaming that he was overthrown unjustly. Given Rosie’s demonstrated personality – smiling, sweet, sociable – there is no reason in Middle Earth why this woman would either be single or sitting around pining for that dude that danced with her that one time that Merry and Pippin set off the dragon firework. Really read that last sentence and let it sink in. She danced with Sam once while two jackasses fucked around with pyrotechnics. Someone with confidence, personality and looks is not going to sit around waiting for someone to get over themselves to grace her with conversation.

Because wives and children are rewards.

Let’s call this romance what it is: film version Rosie is a reward for Sam being such a good guy. While it’s a nice message to be a faithful, true person because you’ll ultimately get the girl of your dreams and a happy life for doing the right but difficult thing, this is a tough message from a female perspective. This concept is not a fairy tale for us because it strips us of autonomy – we have to be ready and available when someone else dictates that we should want them. We’re told in recent years to have some respect for ourselves, set some standards, and not let anyone treat us as objects. Stories like this hold up a woman as something to be won or redeemed upon completion of a task, which reduces us to nothing more than a remote-control helicopter at the local miniature golf place. That’s the toughest part to swallow: in a world where fidelity is prized, where does the love and respect of the self – and what we feel we deserve as a group who has had to sit by and watch someone else have the adventure – come in?