Warning: count(): Parameter must be an array or an object that implements Countable in /homepages/45/d96662078/htdocs/clickandbuilds/TheBackseatDriverReviews/wp-includes/post-template.php on line 316
↓
Home→Animated→Peaceful Warrior: The Power of Compassion in Princess Mononoke

Hayao Miyazaki’s Princess Mononoke often receives its praise for both its portrait of strong women and dedication to demonstrating the impact of industrialism upon the environment. The praise is well-deserved; however, other themes lurk about that in plain sight are just as worthwhile. In between the layers of strong-willed women, adoptive families, accepting societies, and the desire to conquer the natural world, Miyazaki weaves together the quiet portrayal of the power of compassion when applied to action in the form of both Ashitaka versus every other character in the film. 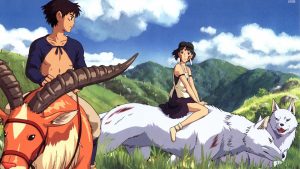 It’s not always a matter of physical strength.

Ashitaka is the perfect balance of action and heart. When his village is attacked, he rides into battle with little regard for his own safety; the resulting infection causes him immense physical and psychic pain. However, he calmly accepts his lot, at ease with the sacrifice because it has saved his entire village from destruction. He travels to Irontown and listens to the struggles of its inhabitants against Princess Mononoke and the wolf pack as they attempt to mine iron, then meets San and Moro, who desire to protect the forest. Along the way, Ashitaka continues not only to listen, but to adopt a stance of only using physical force when absolutely necessary. When San stabs him in the chest, he responds by hugging her. When Lady Eboshi challenges him to a fight, he chooses instead to hold his cursed arm to avoid striking her. He fights to restore the Forest Spirit’s head to preserve the balance of nature in the face of industrialization, but the action is more so the strike that is needed rather than a rash response. 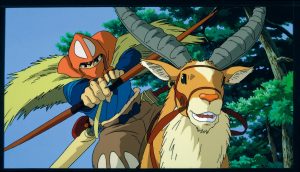 The other characters have far more physical reactions that result from emotions that are not tempered by thoughtful reflection. San is a combative woman whose fighting abilities are reflected in her passionate approach: loose, sloppy and quite often missing her mark. Lady Eboshi, though compassionate toward prostitutes and lepers, functions as a thinly-veiled opportunist whose calculation upsets the natural order of the world in a self-centered quest for power. Even Jigo and Moro – two sides of the Forest Spirit coin – function on lashing out in pursuit of their shared trophy, each wishing to obtain an end from it. These characters bring about pain, destruction and death. There are positive attributes, but we see those attributes through the eyes of Ashitaka; we do not see those aspects because the people in front of us to whom we are not bonded come off as stubborn, arrogant and self-serving. 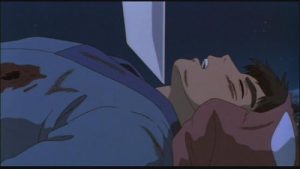 Now would be a good time to fight back.

And yet Ashitaka sees the best in them and their potential, which is why he seeks to continue moving toward a path of redemption. In everything from his protection of innocent people to a sense of duty to the control of a force of darkness within him, Ashitaka seeks to understand the situation that surrounds him while avoiding painting anyone broadly as the villain. His goal, he tells Lady Eboshi, is to “see with eyes unclouded by hate.” He refuses to fight Eboshi later in the film, telling her that while the curse within him wishes to kill, he knows that the carnage is not a solution: “But even that wouldn’t end the killing now, would it?” His influence on San causes her to scream out, “I don’t want to become a demon!” when the anger of the demon threatens to engulf her. And when San gives up hope of the Forest Spirit ever coming back to life, he tells her, “He isn’t dead, San. He is here with us now, telling us, it’s time for both of us to live.” These are the words of an enlightened man. He’s not a coward. He’s not avoiding action to see who will emerge the victor. Ashitaka seeks to understand the problem and function not only as an effective leader, but as the voice of negotiation and perspective to achieve understanding. He’s essentially the village elder: he lives with a curse that alters his perception and allows him to walk into a situation with greater respect for life. For Ashitaka, it’s all sacred, and feelings run high because their lives and causes matter to the individual. He doesn’t judge, he doesn’t look down his nose – Ashitaka is a successful, wise man that winds up being the solution because he’s content to do more than blindly swing his sword. Ashitaka is the voice of reason when everyone wants to react. 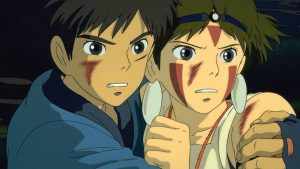 Sometimes, we just need someone to listen and hold us.

Goddamn it, we need that lesson today. We live in a world that’s so quick to fry someone for the smallest infraction; we all know that I’m in that camp from time to time. I’m not saying that some sides aren’t clearly wrong – what I am saying is that if you listen, sometimes, you can gain perspective and find a better way to treat the problem. A friend of mine who’s an activist said that the key to truly getting to the heart of a particular matter was to take the time to listen to what ails someone. Maybe we need to do that. All sides.