Warning: count(): Parameter must be an array or an object that implements Countable in /homepages/45/d96662078/htdocs/clickandbuilds/TheBackseatDriverReviews/wp-includes/post-template.php on line 316
↓
Home→Gender→Pure of Heart: Feminine Stereotype in Nosferatu (1922)

F.W. Murnau’s Nosferatu (1922) is often hailed as one of the greats of the silent era. It features a little bit of everything: a creepy male lead, heavy makeup, judicious lighting, and an unauthorized adaptation of a Bram Stoker novel. All in all, the film is a good time, but there’s something disconcerting here. The character Ellen Hutter (Greta Schroder) is problematic on a multitude of levels: she represents the blind stereotype of the inherently good, self-sacrificing woman that exists only to make the men in her life better. 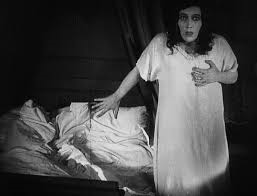 No, that’s not indigestion.

Ellen’s major problem is that she’s entirely too precious to be believable. When we first meet her, she’s a German Expressionist parody of Snow White: taming the local animals whilst looking pretty in her sausage curls. She’s all smiles until her husband presents her with a gift of flowers – upon seeing the gift, she bursts into tears and asks her husband if he thinks that they suffered. Ellen, they’re flowers, but that’s beside the point. While this is meant to demonstrate that Ellen is a sensitive, deeply feeling creature, she comes off a bit closer to Nathan Lane’s character in The Bird Cage screaming, “I pierced the toast!” It doesn’t stop there, either: Ellen is left in the care of her good friends, and seems to mimic the mind control that her husband is under while in the clutches of the vampire. She then tops off her empathic life by sacrificing herself to save Europe from the great terror that is Count Orlock (can’t really argue with her here – Max Schreck, though only in his early 40s at the time of shooting, was utterly terrifying and it’s easy to see why rumors of actual vampirism persist into the present). 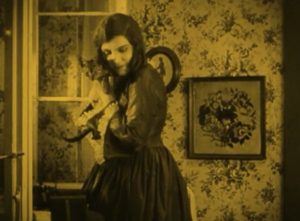 Another problem from which the character Ellen suffers is the fact that she means more to the men around her in terms of what she represents than the components that actually create her personality. Ellen means distinct things to those around her, yet the thread between each of the male characters has a common theme: Ellen is something that requires protection because she is a good and sweet, and therefore becomes a target for corruption. When Hutter is around her, they’re typically embracing, and he encourages certain behaviors within her, such as discouraging her reading a particular passage concerning how to stop a vampire. Likewise, close friend Harding sees Ellen as something to protect, much as a piece of jewelry would be placed into a safe. Even Count Orlock gets in on the action, remarking that Ellen has “a lovely throat,” marking her more so as a food source than a human being. The overtones of this treatment are disturbing: Ellen is something pure and feminine, and as such, she requires protection. After all, at the end of the film, Ellen’s compelling beauty and purity renders the evil vampire in a stupor, unable to save himself from the sunrise. She’s not keeping Orlock engaged with incredible conversation over scones – she’s got him locked in, in a position that’s verging on sexual, allowing herself to be violated and literally bled dry so that others can continue to live. She gives of herself to save everyone else, because she is good and pure. And let’s face it, when you view her in this light, no one is going to miss Ellen crying over cut flowers. They’re going to miss her because of what she does for them, whether it’s something nice and naïve to come home to at the end of a long business trip, or her good-natured smile. Ellen is praised for her traits rather than the core self. 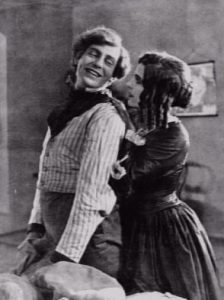 Literally propping him up.

We’ve gone from one-note Disney princess to Christ figure in one fell swoop, and that should scare the living hell out of anyone who has even a passing fancy for calling bullshit on gender roles. Ellen reflects the dangers of stereotyping here: she’s not a person, but rather a representation of what a woman should be. The greater issue with that logic is that Ellen is not a person in this respect: she’s an archetype, which is far more difficult to humanize. In real life, we’d look at someone like Ellen and mutter, “Is she for real?” She’s an odd marriage between Pollyanna and Phoebe Buffay from Friends: incredibly innocent to the point of appearing cognitively impaired. Worse, Ellen is self-sacrificing in her purity, which sets the dangerous precedent that only the best women are the ones who are pretty and sweet enough to die for their husbands and friends by allowing someone to bodily violate them. Ellen has to place herself into situations that cause her to faint in order to save the day, and her death is labeled “honorable” because she sacrificed herself in the face of evil. While honorable, the point of contrary lies in the fact that survival is just as important as sacrifice – the fight should not be discredited. Furthermore, women don’t need to be as perfect as Ellen in order to make a difference. To hold her up as an ideal – which clearly happens in this film – is to say that this is someone we should aspire to be. And that’s not right in the least. 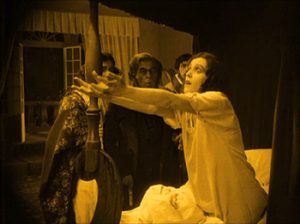 The character Ellen poses a conundrum of reality versus archetypal woman: do we want the imperfect person that we could find in the real world, or do we want that perfect illusion? For those of us that love choice B, Nosferatu presents a terrifying notion that’s far worse than any vampire: you need to be perfect, naïve, obedient, saccharine and beautiful to have meaning in the world. It’s a dictation of what makes up the perfect woman. If a man can be an imperfect hero, then so can our heroines.