Warning: count(): Parameter must be an array or an object that implements Countable in /homepages/45/d96662078/htdocs/clickandbuilds/TheBackseatDriverReviews/wp-includes/post-template.php on line 316
↓
Home→Comedy→Weekend Movies: Five Reasons to Watch Jane Austen’s Mafia!

How do we celebrate the period in between Halloween and Thanksgiving? With comedy, of course. After all that horror, we’ve got to have some sort of a break in there. If we go for too much intensity, we’re going to wind up looking like we’re perpetually constipated or worse, we’ll develop the inability to smile. No one wants that, especially when PUMPKIN PIE is upon us. So we’re going to kick it spoof style with the 1998 comedy Jane Austen’s Mafia! This one is going to strike out with some, but if you love some stupid humor, boy have I got the movie for you. Here are five reasons to watch it this weekend. 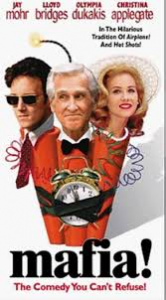 When I say stupid, I mean really, really stupid. Bad puns. Visual gags. Toilet humor. Dick jokes. Digs on Italian-American culture (growing up Italian-American, I can tell you that there’s a lot of harsh truth to it. You roll with it.). While the jokes may be cheap and groan-inducing, it’s also a lot of fun. Sometimes, you need some stupidity in your life. With the world we live in, we totally need to unwind with stupid jokes.

I am not a fan of mafia movies. I think that boils down to having once dated someone who carried anti-Italian sentiments – I never wanted to be the stereotype because it sucked getting called a slur. It always struck me as being a bit powerless to have everyone think that your heritage meant that you were involved in organized crime. Point is, I always stayed away from mafia movies. That doesn’t mean I’m opposed to ripping on them. And rip on mafia movies this film does. It goes after Forrest Gump and Il Postino as well, but the primary targets are the Godfather trilogy and Casino. It has quite a bit of fun at the ultra-serious expense of those movies. 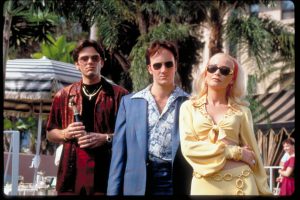 #3 – The characters are so deadpan

Part of what can make a comedy so successful is the way the actors play it off. Some give a sly wink and a nod to the audience, breaking the fourth wall and letting us know that everyone is in on the joke. But what happens when someone is so achingly earnest that they’re completely serious? When they’re genuinely shocked at the ridiculous thing in front of them, it’s excellent. Jay Mohr and Christina Applegate manage to keep a straight face through some pretty stupid stuff. Billy Burke does an excellent job with this as well in his role as the drug-addled younger brother. The deadpan quality is gold in this instance, and the cast should be commended for not breaking out into giggles. I would have totally failed.

Some of these jokes will seem dated to younger viewers, but for anyone who’s at least in their late 20s, they’ll love the gags. Forrest Gump jokes are great. The great reading pushes of the 1990s are wonderful as well. In between, there are gags about soup and cars and all manner of things that were popular 20 years ago. In the age of 90s nostalgia, it’s a good throwback. 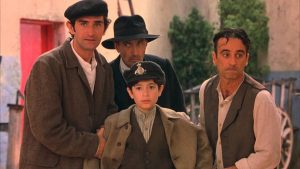 Everybody loves a good Godfather spoof.

I’ll be frank: we live in a world where there are mass shootings, loss of basic human rights, healthcare debates and various other violations all over the world. I’m not just criticizing the US: it’s everywhere, and it’s crushing. There are many times when I feel like no matter what I do, I can’t possibly help put a dent into making things better. You know what makes me think I can get back up and start trying? A good comedy. The ability to laugh. The chance to recharge, take some perspective, laugh a bit, and go back at it with some joy in my heart. Yes, this movie is stupid. But this movie is also a lot of fun. Stupid fun can be very, very good for the soul.

Jane Austen’s Mafia! can be a bit of a pain in the ass to find. Your best bet is one of the copies up on YouTube. It’s a real gas.