Warning: count(): Parameter must be an array or an object that implements Countable in /homepages/45/d96662078/htdocs/clickandbuilds/TheBackseatDriverReviews/wp-includes/post-template.php on line 316
↓
Home→Children→Sunshine and Roses: The Dark Side of Parenthood in Shelley

I know some extraordinary people that would make fantastic parents yet don’t want kids. It doesn’t matter that I think they’d be excellent at it – it’s not what they want after careful consideration, and frankly, I love them all the more for thinking through the decision rather than going along with what’s expected. Whether it’s a fear of childbirth or the assessment of personal goals versus the demands of raising a child, it’s a subject that many more in this world could stand to meditate upon for longer prior to committing to raising a child. Image my surprise, then, when this subject came up at Christmastime in the form of the 2016 Danish film Shelley, which was written by Ali Abbasi and Maren Louise Kaehne, and directed by Abbasi. Shelley is the story of Elena (Cosmina Stratan), a young Romanian maid that agrees to carry a child for her employers Louise (Ellen Dorrit Petersen) and Kaspar (Peter Christoffersen). It quickly becomes apparent that Elena’s pregnancy is well beyond the normal discomforts, and that something is very, very wrong – if not demonic – with the new baby. What’s most extraordinary about this film is the way it handles the anxieties of both pregnancy and parenthood in both genders through the metaphor of demonic spawn. 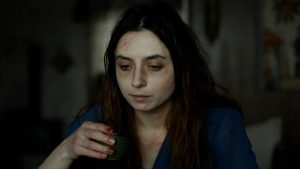 And I thought my pregnancies were bad.

Pregnancy does not come easy in this film. When we first meet Louise, she’s recovering from surgery. She sadly tells Elena of her inability to give birth to a child: she can get pregnant easily, but has yet to carry a child past the 24-week mark of gestation. Petersen infuses a sadness into her performance as Louise that is easily recognizable for anyone who has endured infertility. It’s only recently becoming an acceptable topic, and even then, no one wants to speak about it; after all, social perception is that women should be able to have babies easily, and when the process is cut short, it must be dealt with silence. It’s the crushed look that those of us who have endured anything remotely close to Louise’s cycle of loss recognize immediately: that feeling of impotency, that feeling of hopelessness. In that moment, we bond over one of the darkest, most unfair pieces of the birth process: not everyone makes it out alive. It’s an aspect from which many reel mentally. Enter Elena, who has a child from a failed relationship that the father does not support; as such, she’s left to accept a great financial offer to do something that came easy for her once before in order to provide better living circumstances for her child. While it could be argued that Elena is dodging her responsibility to raise her son… no one goes through a pregnancy in order to escape parental duty. This is particularly clear when we start to see what Elena suffers while carrying the titular Shelley. She’s suddenly beyond fatigued, having to take iron supplements and extra rest. She begins having nightmares. Her hair falls out. Water physically hurts her skin, making the prospect of even a simple bath impossible. The unnatural nature of the pregnancy causes Elena to punch her belly repeatedly, which places her on a watch not for her own safety, but to ensure the baby’s birth. The goal is not to keep Elena alive – it is so that Louise can have Shelley in the end. Louise knows that if the family of the sick Elena is called, they will take away both Elena and the child, robbing her of motherhood once again. It is this negligent action – the refusal of mental and physical care – that results in Elena being driven to suicide, which is then forgotten by Louise and Kaspar alike when they meet their new infant. 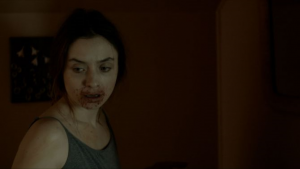 It’s for the baby…

However, the nightmare doesn’t stop there, as pregnancy is only the beginning of the parenthood process. While Louise happily tends to her newborn, Kaspar visibly struggles with his new role as a father. The baby is not natural to him: he can’t sleep due to the noises she makes, and finds it odd that she does not react in the same manner as other children. While at first happy at the prospect of having a child, reality has set in via the extreme of Shelley: she does not sleep, she causes him to have bad dreams, and there is something about her that makes bonding with his biological child difficult. At one point, he attempts to elicit a reaction from Shelley, first by making faces at her, then by raising his fists and stopping short of striking her. This causes alarm from Louise, and understandably so: she doesn’t want her baby to be hurt. For the audience, we realize that something is wrong with the baby, and that Kaspar is right to feel this immense aggression toward something that has already killed another person and doesn’t sleep. What’s woven in, though, is easy to miss: in a clever reversal of the modern trend to discuss postpartum depression, Abbasi and Kaehne place the burden of depression onto the father rather than the mother. While the feelings of unnatural parenthood and detachment often fall to the hormonal mother struggling to transition into the socially-accepted role of sacrificing her own needs for a person she barely knows and is still learning, Abbasi and Kaehne strike a blow for gender equality by affording these same feelings to the dad. Louise is too blissed-out by a baby that doesn’t cry to see what her partner does: that this is someone who doesn’t behave normally, and that it’s unnerving. In this respect, Louise loves the ideal of motherhood more than the reality of the baby: she gets the quiet baths and serene smiles after achieving her goal, while Kaspar is sleep-deprived and becoming a bit unhinged, completely lost as he doesn’t know what to do with this new person that is completely alien. Louise is getting the good part of the deal: the pretty, content baby. Kaspar sees reality, and allows himself to feel unsettled. 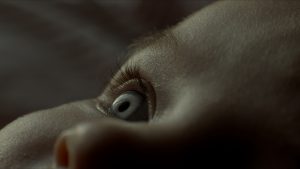 Through these extremes, Abbasi and Kaehne have managed to craft a tale that looks at pregnancy and childbirth as something other than the scoop of magical ice cream that the Mini Van Mafia wants us to believe that it is. Elena literally destroys her mind and body to bear a child in order to pay for the kid she already has. She’s met by a healthcare provider that makes Charles Grodin’s gynecologist in Rosemary’s Baby look compassionate and sympathetic: she’s told it’s all normal, and it’s all for the good of the baby. While that line doesn’t seem like much, it’s a cold indictment of the attitude that the mother stops functioning as an autonomous unit when she becomes the vessel for a new human being, something of which the women of the United States of America are becoming more and more aware. For Louise and the doctor, Elena’s physical hell are simply aspects of pregnancy that will bring about the ultimate goal of motherhood. It therefore doesn’t matter that the woman in front of her is getting sick to the extreme and is enduring a hellish experience: Louise wants that baby, and everything else is a sacrifice she does not have to directly make in order to achieve the long-held ideal. Total honesty: my pregnancies were not easy. I went through infertility, had morning sickness throughout almost the entire duration, and at one point suffered a nose bleed so severe that it almost merited a trip to the emergency room (that bathroom looked like the hallway of The Shining with the Grady girls lying around). No one wants you to think about that though – it’s all about producing those little people that look so adorable in tiny clothing. Once they’re out, it’s just as disorienting. Though it’s extreme, Kaspar represents the shock that new parents face when that ideal is challenged. You go in realizing that it’s going to be tiring, but no one prepares you for the feelings you’ll have. You don’t know how to handle it if there’s postpartum depression involved, which can be scary and induce feelings of shame. You get judgment by others on how you’re doing, and if you worry that something isn’t right, there’s a social tone to only focus on the good of the situation. By giving this thought process to Kaspar rather than Louise, it allowed for the equality which all parent dynamics should have: yes, it’s okay to feel this way because there are two of you in this equation. It takes a fucking demonic pregnancy and birth story to level the playing field. 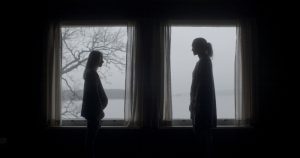 Don’t get me wrong: I love my children, and I’m glad I went through the birth and raising process. However, I have to respect this film for staring the harsh realities of the process square in the eye. It’s not a huge fairy tale, and it can be the hardest thing you’ve ever done. I think as a whole, this film is a great reminder to think through the positives and the negatives of this experience. After all, rose-colored glasses do no favors in the long run.