Warning: count(): Parameter must be an array or an object that implements Countable in /homepages/45/d96662078/htdocs/clickandbuilds/TheBackseatDriverReviews/wp-includes/post-template.php on line 316
↓
Home→Horror→Weekend Movies: Five Reasons to Watch The Eyes of My Mother

Cross-promotion time: I got to review this in December for Diabolique Magazine. Now that it’s in wider release – both theatre and Video On Demand (which is putting out some really good stuff that’s bypassing the whole bullshit game of the release system, let me tell you) – I feel like it’s safe to keep trumpeting. It’s about a woman with a dark past that is seeking to connect to others. Gang, if you’re going to watch one movie, make sure it’s this one. Auntie Erin is here to lead you down the path that rocks. Here are five reasons to watch it. 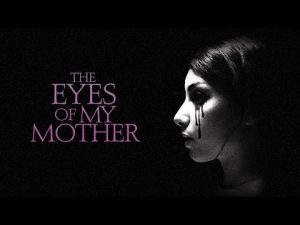 Black and white can be a gamble. Done poorly, and it’s a bad cross between pretension and a 1990s grunge music video in the worst possible way. Done properly, it’s a reminder of how elegant the pre-technicolor era can be. The black and white quality oozes pure beauty. Total enhancement, making the film something of a dream (albeit a scary one).

We watch our main character, Francisca as both a child (played by Olivia Bond) and an adult (played by Kika Magalhaes). Both Bond and Magalhaes are extraordinary in this role: there’s the perfect amount of detachment and longing. Magalhaes is particularly effective as a woman seeking to fit in somewhere, anywhere, and failing miserably without really knowing why. I’ve heard her Francisca described as a monster for the ages. It’s absolutely accurate. Francisca is terrifying in how normal she looks, with just enough weirdness to find her offputting without knowing why. Sometimes, the worst monster is the one you’ve sat next to a thousand times and have backed away from slowly without a reason. 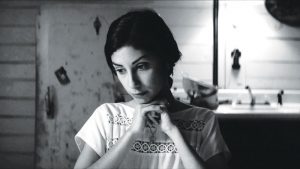 Seriously, this woman is a monster.

Brill plays one of our antagonists, a man named Charlie. I won’t spoil much, but he has quite possibly three of the most chilling words of dialogue in the film. Whereas Francisca is awkward and weird, Charlie is ever-smiling and unnerving. Plus his chemistry with Bond is fantastic. This character will be how I see Brill for quite some time.

Motherhood. Belonging. Heartache. Connection. Loss. Education. Isolation. Co-dependence. Survival. Mourning. Innocence. This film is packed with layer upon layer. I think I need at least five more viewings in order to fully get everything, and even then, I don’t think it will ever be enough. It’s simply delicious and deep, like a dark, snowy wood at nighttime. 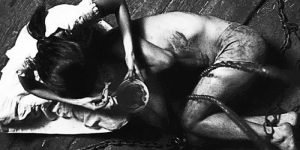 This film is jam-packed with moments of being completely terrified. It’s not gory, which is fantastic for those that prefer more psychological horror. What kills you is what you don’t see: ever anticipation of the hammer swing, every expectation that you’re about to see someone mutiliated. It’s what your mind makes up that’s far worse, and in this instance, it’s the conditioning that we’re about to see something horrible (as most modern movies teach us) that really locks in that anticipation. It’s quite remarkable and well-done, crafting a tense ride.

This one is available for streaming on Amazon video. By all means, check it out. It’s a dark, twisted nightmare of a film.