Warning: count(): Parameter must be an array or an object that implements Countable in /homepages/45/d96662078/htdocs/clickandbuilds/TheBackseatDriverReviews/wp-includes/post-template.php on line 316
↓
Home→Bullshit→The Bro Code: Examining the Relationship Between Billy Mack and Joe in Love Actually

Ah, love is a many-splendored thing. It starts off as a flush, an infatuation with something beautiful in front of you, its imperfections imperceptible to you as you rush to spend every waking minute with it. As time goes on, sometimes love takes on different dimensions, including little jokes and teases. Sometimes, though, you wind up with those little jokes and hints of discomfort that spiral into the silence of one party and the free license to cruelly mock on the other. And that’s exactly where we wind up with the toxic friendship between Billy Mack (Bill Nighy) and Joe (Gregor Fisher) in Love Actually: a portrait of what’s supposed to be a feel-good male friendship where one party is fat-shamed and ridiculed with the expectation that the other party doesn’t have to change his behavior.

Ya hear that, Bill? It’s the sound of my slapping hand warming up.

Billy has a reputation to defend as the “bad granddad of rock and roll,” and this reputation is far-reaching. Billy shows up to interviews where he mouths off about how much his comeback record sucks; he proudly proclaims that he’s gunning for a career resurgence because he’s a recovering heroin addict whose money has run out; he stokes the flames of rivalries with boy bands on national television; he pulls stunts to boost sales. All the while, he refers to Joe as his “fat manager” that he lives a sad life with in a small apartment. Joe has been funding “our gamble,” as he calls it, and silently cringes with each passing stunt that Billy pulls. As if the lack of professionalism wasn’t enough, Joe’s also got to take personal insult as part of the job. Joe stands by and endures comments from Billy about being the ugliest man alive and public stories about the horrors of seeing him in his underwear.

Does not yell once. I would not be so patient.

This behavior culminates at the climax of the film, where we find Billy in the midst of a smashing success for his song. He receives party invitations and notoriety; the champagne flows freely, and Billy’s flush once again. However, Joe’s not invited to any of the parties, which seems really crappy to exclude the rocker’s manager from the festivities. Joe’s home in his apartment without another soul in sight when Billy shows up, declares him to be the love of his life, and gives him a hug. He turned down a bash at Elton John’s place – what a guy! How uplifting. Male platonic love wins the day. Except that in a month’s time, we see Billy stepping off a plane with a new, much younger woman that he introduces to his long-suffering manager, who’s once again waiting diligently at the airport for his client/best friend. He’s polite to the woman, but we can’t help but notice something: Billy gets an entourage, while Joe waits patiently at the airport solo. The subtext here is enough to damn Billy in that nothing has changed: he’s left Joe behind once things start looking up, and yet Joe is still there when he gets back, with a smile and support. 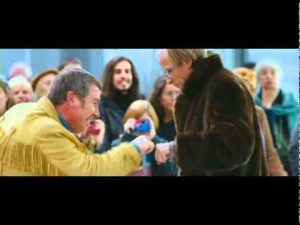 If this is our ideal of male friendship, then the ideal of male friendship needs to change FAST. You mean to tell me that we think it’s somehow okay to have to sit through someone’s insults and shoddy treatment in the name of being a supportive friend? Listen, I get it – in the UK, buddies bust on one another. They can be harsh at times; I’ve seen enough pub banter to know this. However, this example goes well beyond that by merging the best friendship into professional shortcoming: you do not piss off your management team when they are the ones funding your broke ass, and you do not fucking shit on the people who are there when everyone else leaves. Billy gets by on being outlandish, but Joe silently promotes him at all costs and funds his second chances at success. When Billy is washed up, Joe takes him in, as Billy mentions in his interviews to stir up pity. He mocks the man that shows him personal and professional kindness, which is an integrity flaw if I’ve ever seen one. The moment success strikes again, Billy’s first instinct is to leave Joe behind. It would have been far nicer to have seen the public declaration of, “This guy believed in me when I had nothing!” rather than the private, “Hey, sorry I was a selfish twat. Wanna watch porn?” Billy’s apology lacks because, while well-intentioned and a step in the right direction, it’s not the solution to the public embarrassment to which he’s subjected Joe. And the worst part is that in a month’s time, Billy is right back to coming and going as he pleases whilst Joe waits with a smile. If this was a straight relationship or female friendship, we’d be screaming that the dynamics are awful and unsupportive. We’d be telling Joe to drop Billy as a client and change his locks. This isn’t a beautiful story about masculine friendship – it’s the abuser taking what he wants while demeaning his victim in a perpetual cycle. 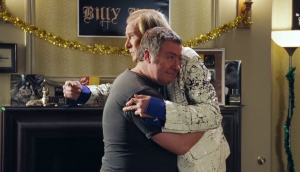 Try not to look so moved, Bill.

This may be a harsh interpretation, but I stand by it. If it’s good enough to tell our women that they shouldn’t tolerate behavior like this, then it’s good enough to tell our sons, friends, husbands, brothers, uncles, dads, you name it that they shouldn’t tolerate someone who treats them like this as well. True love doesn’t publicly humiliate while saying, “You know I love you, right?” in private. That portrait is more in line with an abusive dynamic, and we need to squash the idea that abusive behavior is normal.