Warning: count(): Parameter must be an array or an object that implements Countable in /homepages/45/d96662078/htdocs/clickandbuilds/TheBackseatDriverReviews/wp-includes/post-template.php on line 316
↓
Home→Comedy→Weekend Movies: Five Reasons to Watch The Santa Clause

The early 90s were a great time for family-friendly comedy. We had stuff like Home Alone and Ernest Scared Stupid. It was good times for everyone. 1994 saw the hits keep on comin’ with The Santa Clause, a wonderful piece of holiday confection concerning a selfish executive named Scott Calvin (Tim Allen) who inadvertently becomes the new Santa Claus. Along the way, he has to rebuild his relationship with his son and adjust to his new role. It’s a sweet Christmas movie. Here are five reasons to watch it this weekend. 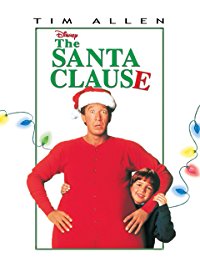 Some people won’t want to watch this film due to the presence of Allen. Allen’s managed to land himself in hot water lately because he keeps going on about how hard it is to be an outspoken, well-connected conservative man in Hollywood. To which I say: dude, if you avoid this one on that principle, I understand completely. Allen’s come off as a tone-deaf douche in recent years – it’s pretty rich to lecture people responsibility when you served a comparatively short sentence for federal drug crimes that would have put away someone of a different skin tone for many more years to come. So I get it. However, the film is a reminder that before we got 2017 Allen, 1994 Allen was way funnier. Or at least quieter to the point where we could focus on the work instead of the asshat.

Not all of us are master chefs, and as such, we fuck up dinner. I’ve burned my fair share of meals in the past, but nothing as bad as Christmas Eve dinner. It’s nice to see a dad try to do an important dinner (especially when he’s an ad executive that can afford the help) and fail miserably – it’s a bit of a connection. Some of us just mess up. We smell our own. And that’s comforting. 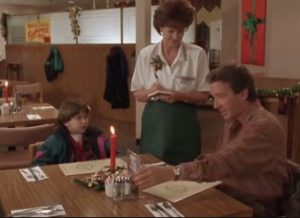 Man, some years, Denny’s sounds like the freaking jackpot. Especially if I don’t have to cook.

Watching the magic unfold in this film is adorable. Everything is done well, from the magical first night at the North Pole to the little pieces of everyday magic. The best part: little kids are the ones that really take notice. It’s the crawling on the lap and the sly sideways looks, the small smiles and knowing questions. They know what’s up. That’s the real magic of Santa: the wonder and insider knowledge of small children that something wonderous is happening and the grown-ups don’t get it because their spectacles are clouded.

In the 1990s, actor David Krumholtz was in quite a few movies. Furthermore, he was enjoyable in everything. My personal favorite was his turn as a bratty child star in Life With Mikey. Really, the cereal commercial scene with him screaming is everything (I can’t find it on YouTube to link it. You cut me deep, YouTube. You cut me real deep.). His turn in this film sees him as the no-nonsense head elf of the North Pole. If you’re familiar with his work up until this point, you’ll immediately perk up with recognition. It’s like seeing an old, sarcastic friend and knowing that you’re about to have a good night out with them, in the corner booth of a restaurant packed with Jersey Shore types. Krumholtz still gives me that feeling. 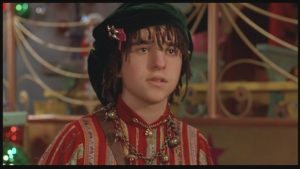 I vote Krumholtz as the mascot of the 90s.

#5 – The logical response to the changes

You know, for a family movie, this film approaches some serious concerns about parental fitness and mental health in a way that’s proactive and real-world. One of the first things we typically do when poking holes in a film is to look for the real-life applications of the situation, and how out of place they seem in an effort to make the plot work. We typically watch these films, snort and go, “That would never, EVER happen that way.” This film does a good job with stabbing in reality: Scott runs the risk of losing his job, his relationship with his son, and his parental rights, and it’s done so against a realistic backdrop and process. There’s concern and legal recourse that’s relevant to the plot and fitting to the scenario. While the ending is a bit out there, it’s not a bad perspective to take.

The Santa Claus is available for rental on Amazon.