Warning: count(): Parameter must be an array or an object that implements Countable in /homepages/45/d96662078/htdocs/clickandbuilds/TheBackseatDriverReviews/wp-includes/post-template.php on line 316
↓
Home→Horror→The Cure: The Arbitrary Nature of Language in Pontypool

Only Canada can make words something terrifying, I’ll give them that – in a land known for politeness, Canada has to kill people via viral words. In Bruce McDonald’s 2008 film Pontypool, the real villain seems to be some strange virus that breaks down the entire mind/body bond in order to render the victims zombies, but it’s the way that the virus both spreads and is combatted that becomes unique. I’d be willing to wager that Pontypool makes a strong case for not only the arbitrary nature of language, but for the disconnect between word intention and actual meaning, marking a much grimmer psychological need for survival.

Backing up for a moment, let’s look at the nature of language. The need to make connections to other human beings – to communicate, to bond, to form societies – is necessary for survival, particularly in the evolution of pack animals. Even insects and animals that do not communicate via word do so via sound and signal: crickets and grasshoppers, bats, even fish using gill vibrations. The notion behind this is something called signaling theory: the idea that two parties agree upon a communication system that provides some sort of mutual benefit. In nature, this is most likely sexual, and heralds the ability to reproduce successfully, therefore continuing the species; in a more social setting, it’s taken on financial dimensions to provide greater profit and therefore socioeconomic fitness to survive a landscape that we change rather than evolve to fit. Either way, the construct touches upon the notion of arbitrary language: we make the words and associate tone and meaning to convey a need. It’s the meaning we assign to any given word that can vary based upon what we need it to be. 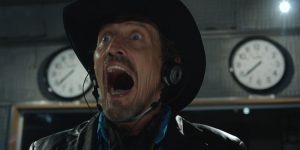 So, back to Pontypool. When we first meet our main characters, we learn that Grant Mazzy (Stephen McHattie) is a shock jock on thin ice with his radio station manager, Sydney Briar (Lisa Houle). Grant makes his living getting people riled up with his words. Things start to go south when reports of crazed individuals repeating nonsense words roll in, culminating in the infection of stationhand Laurel-Ann (Georgina Rilley). Explanation rolls in from Dr. Mendez (Hrant Alianak), a man familiar with the innerworkings of the virus: the virus picks only certain words, which can only impact certain people; the words must be passed on to someone else, or else the host of the virus will become so ill that it will die alone, vomiting up blood and gore. Mendez explains that in order to have a chance at survival, our pair must stay indoors and not use terms of endearment, rhetorical discourse, or any words in English that someone could understand and twist. In other words, shut yourself off and don’t communicate in a warm fashion that could signal intention to benefit mutually. This leaves our pair to do battle with feelings of hopelessness, the need for survival, and a craving for affection while retaining their humanity, realizing finally that they have to confuse each other by giving new meaning to words they know and recognize under traditional context. They get to make up their own meaning in order to confuse the rest of the masses and get out alive. It literally becomes Grant and Sydney in their own little world with their own language. 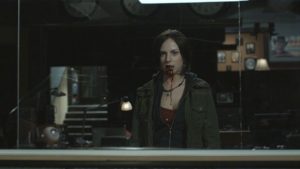 “So, wanna talk about how you’re feeling?”

The implications of this message are both daunting and clever. Survival ceases to be something that requires a group of multiple people with different useful skills: all you need is one, which, in this case, turns out to be a mate. To stave off those that wish to harm them and make them like themselves – mindless cogs that wander around in search of a connection – the pair must then make its own language. Sydney and Grant have to stop being themselves and adopt a new identity: Johnny Dead-Eyes and Lisa the Killer. The names make them sound like gangsters, but in truth, they’re codes that keep them safe; in short, the pair is saved by creating their own world with their own inside jokes. This is an activity reserved for mutually exclusive couples: nicknames with meaning that only they know, a step on the pathway to sexual exclusivity and genetic continuation. And that’s where Pontypool becomes a stroke of genius: the whole thing winds up being a statement on the way that two people put their backs together and spout gibberish that no one else understands to survive.

It’s not so much a cure as it is a pattern of human evolution that incorporates the principles of communication: Sydney and Grant must forge ahead as a pair without the conventions of cutesy affection in their native language. If they’re going to survive, they have to confound those around them and live in their own world. They have to both isolate and merge, but only in selective circumstances. Pontypool therefore gives the viewer a distinct impression: the words we use only have meaning insofar as we allow them, and can change at any moment; in fact, your very survival may depend upon your ability to adapt and evolve.