Warning: count(): Parameter must be an array or an object that implements Countable in /homepages/45/d96662078/htdocs/clickandbuilds/TheBackseatDriverReviews/wp-includes/post-template.php on line 316
↓
Home→Action→Weekend Movies: Five Reasons to Watch Rigor Mortis

What can possibly be more fun, you ask, than a Hong Kong action film? A supernatural Hong Kong action film! One that has some twists, turns and damn good style. We’re heading to Hong Kong for the weekend with 2002’s Rigor Mortis, a film directed by Juno Mak and produced by Takashi Shimizu (hint: he’s the dude that gave us Ju-on and The Grudge series. Yes, I realize one is a derivative/remake of the other, but I class them separately.). Here are give reasons to watch it this weekend. 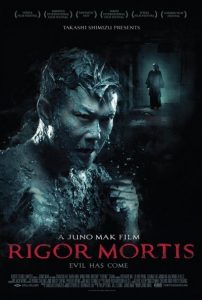 #1 – Portrait of a life falling apart

Chin Siu-ho (playing a version of himself) is an actor that had hit the big time in the past (more on that in a minute). However, things have taken a downturn: his wife has left him, and he’s without his son. He’s lost and has just moved into an apartment building that doesn’t look to be where you’d expect a successful actor to live. He’s suicidal and broken. This is not a pretty situation, and in a sense, it feels a bit taboo that we’re watching it. This piece of the plot is a part of life so many try to ignore: the way someone’s life splinters, and how we bring ourselves to look the other way. Something to think about in this world.

Have you ever seen the 1985 film Mr. Vampire? It’s interesting. Alright, I’ll come right out and say it: this is the perfect weird movie to get completely drunk to and watch while sharing a plate of nachos with friends. What does that have to do with anything? Chin Siu-ho is the lead actor in Mr. Vampire, and the work is referenced in Rigor Mortis. This film includes a man playing a version of himself after he’s been in a moderately successful supernatural film that actually exists. It’s a bit of a long straw for a small drink of water, but for those of you who big little references like that, it’s a lot of fun. 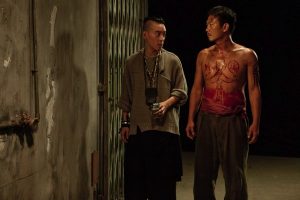 Just enough of a nod.

I have to hand it to director Mak: I really dug the gray color scheme he selected for this film. It’s dark and dank, which suits the mood perfectly. He knows how to move from reality to the spirit realm, marking the transition with dust, grime and a bit of carnage. It works well, especially as we’ve all gotten used to the slowed action and flying kicks through the air. In its darkness, it feels fresh, if that makes any sense at all.

Ghosts and vampires and albinos, oh my! Okay, albinos might not be supernatural (or even done the properly here), but there are plenty of ghosts, demons, vampires and exorcisms to go around. There’s enough to fill an entire apartment complex, and let me tell you, those suckers are lurking everywhere. Everywhere. It’s enough to make you want to build a house in the country where you can get away from all of this. 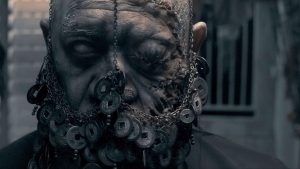 Sucker for a good action sequence here. Take a step back and appreciate it for a moment: all of the hard work that must go into a single frame in order to make it look convincing while also keeping the actors themselves safe. That’s a tall order, and in some instances, these fights can go on for some time. Yes, we love it and we eat it right up every time, but really stop to think about everything that goes into the making of the final product. All of the training, all of the painstaking cuts, pauses, wires, blood capsules, etc. Then go back and watch these fight scenes again. Prepare to be knocked on your ass.

Rigor Mortis is currently available on Hulu for streaming.