Warning: count(): Parameter must be an array or an object that implements Countable in /homepages/45/d96662078/htdocs/clickandbuilds/TheBackseatDriverReviews/wp-includes/post-template.php on line 316
↓
Home→Love story→The Love of a Good Woman: Vengeance and Forgiveness in Maleficent

2014’s Maleficent wove together the perfect storm of components: it was dark fantasy, it was stylish, and it was based upon a villain who has long fascinated the movie going public, particularly yours truly. The film gave her a great voice and perspective: as played by Angelina Jolie, you couldn’t help but stare, wondering what type of evil deeds she was going to inflict upon the young Princess Aurora (Elle Fanning). Thematically, the plot wove together an extraordinary concept: the notion of a failed romantic relationship and broken trust being mended by friendship and genuine affection. More importantly, it’s the women in this story who are afforded the chance to heal via love, as our main male figure, Stefan (Sharlto Copley), is too consumed by politics to offer a shred of human feeling. 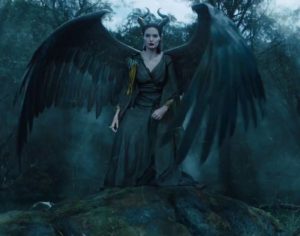 When we first meet Maleficent and Stefan as children, they begin a relationship that grows into love. We watch as the powerful child fairy grows fond of her human friend, culminating with a kiss in their young adulthood. However, Stefan is not content to live and love in the forest – he wants the glory of being a wealthy, respected man. To achieve those ends, he must defeat Maleficent, who has angered the local king with her defense of the forest from human expansion. What follows is the drugging of her and removal of her wings, itself a metaphor for rape: by overpowering her and removing the physical aspect that he feels gives her the greatest power, Stefan dominates and humiliates her. What he doesn’t realize is that the attack galvanizes her in a quest to make him personally suffer. If you notice, she doesn’t stage attacks against anyone so long as they stay out of her territory: it’s when they attempt to invade that she makes life hell, and it’s when they strip her of very personal pieces of her body that she shows up with an axe to grind. She wants to tear down that which has violated her, and protect that which she still has left. 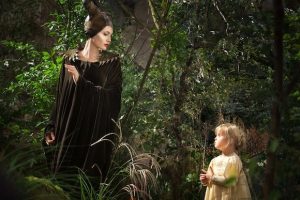 I love that she refers to her as “beastie”.

Enter Aurora, whom Maleficent initially hates but then grows to love. As a baby, we watch the fairy glare at the happy child, uttering, “I hate you.” However, Maleficent quickly realizes that her revenge plot will go to hell if she doesn’t keep the little girl safe until the appointed time – thus she becomes the unwilling guardian to Aurora, as the girl is being raised by three half-witted fairies with no idea what they’re doing. As more time elapses, the pair begins to get to know one another, and then does something astounding: they grow genuine affection for one another. Maleficent is a guardian to Aurora as much as she is to the forest, and Aurora is the clean slate of a human that her father should have been: she is filled with wonder and appreciation, not a desire to rule. So it makes sense that when she’s in unnatural slumber, it’s not the kiss of Prince Phillip (Brenton Thwaites) that rouses her – he’s only known her for approximately 10 minutes. That would be like a Tinder date promising undying love after one drink. It’s Maleficent that can wake the girl, because she has let the child into her heart. She’s part of that which she loves and wants to protect. Aurora, in turn, releases Maleficent’s wings, granting her the ability to finally defeat Stefan in combat. 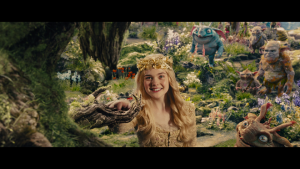 And they all lived happily ever after.

The difference between the male and female rulers is both stark and damning. Stefan and King Henry (Kenneth Cranham) both operate under a need to expand: they want power, and they have little time for human interaction, let alone affection. Henry can’t stand that his progress is blocked – it’s an affront to his pride more than anything. He offers Stefan his daughter as payment for ridding the land of the obstacle to his political problem, because Maleficent represents a challenge to his rule and sense of Manifest Destiny. Stefan, for his part, does not seem to love his wife in the least – we never hear about their happiness as a couple, just that they’ve married and produced a child together. She’s part of his socioeconomic advancement, and he does not even blink when told she’s on the brink of death. Instead, he’s obsessed with defeating his political enemy, who threatens to overpower him. It’s up to the women, then, to show them how it’s done. Maleficent has no desire to rule – she wants to tear down the man that effectively raped her. She overcomes her hatred of a baby that represented her violation – the product of the marriage that resulted from her assault – to form an emotional bond with the little girl. The amount of emotional fortitude this must have taken is staggering. Aurora, for her part, recognizes that her father not only does not regard her with affection, but that the woman he wronged cares more about her. It’s Aurora that finally brings the community together, proving alliance is greater than domination. That it’s a struggle of the sexes is sly: the men represent brute force and intolerance, whereas the women represent love, forgiveness and healing. When given the choice between the two, Maleficent and Aurora ensure that the future can arrive with peace and dignity, not exhaustion and war. It’s enough to make you question if the same old way of doing things is truly right – after all, they cause far more problems than solve them.

Stefan is a douche canoe.

In the end, it’s the non-romantic love in this film that cements it as far more of a fairy tale than the giant wedding banquet. Fairy tales of the Western world were intended to teach lessons to their listeners and readers, so that they could better themselves whilst passing down social values. The treatment of conflict resolution in Maleficent is therefore a modern fairytale lesson to us all: stop, listen, forgive, and, when necessary, defend that which your heart feels is dear rather than seek to expand your assets. The true reward is far greater.