Warning: count(): Parameter must be an array or an object that implements Countable in /homepages/45/d96662078/htdocs/clickandbuilds/TheBackseatDriverReviews/wp-includes/post-template.php on line 316
↓
Home→Action→The New Normal: The Lack of Reaction in Deadpool 2

**Warning: This post contains spoilers for a film still in theatres**

True story: I went to see Deadpool 2 opening day, and someone brought their fucking 5-year-old. Now given, he was well-behaved and only started getting chatty at the end, but this is not the movie I would have brought a little kid to see. Sure, I can get needing to get someone out of the house – especially if they live in a dangerous area – but really, go see something child-friendly, like Show Dogs. I can see letting an 11-year-old in, but 5? Yeah, they shouldn’t be watching this. Whoever approved this needs to be slapped. Hard. 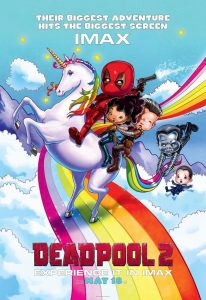 Not a children’s film.

Something that doesn’t need slapping? The reactions in Deadpool 2. Now given, the film fridges Vanessa (Morena Baccarin, who still gets every last bit of respect from me for delivering a breech baby without a c-section – fucking QUEEN), but I’m willing to overlook that in a film that takes pride in trolling conventions of superhero films (plus there’s the fact that it addresses the perils of life as the innocent bystander spouse of a vigilante, but that’s for another day). What gets me is the way that it simply accepts certain aspects of its execution. Namely, the same-sex relationship of Negasonic Teenage Warhead (Brianna Hildebrand), and the seamless inclusion of Domino (Zazie Beetz) in the festivities. 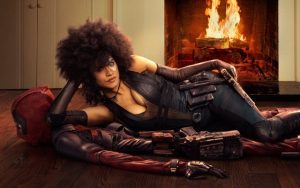 Someone just give her a movie.

First up, Negasonic. When we see her this time around, she’s got a girlfriend, a mutant named Yukio (Shioli Kutsuna). From the look on Negasonic’s face, she fully expects Deadpool (Ryan Reynolds) to give her shit about her relationship. Hell, the rest of the audience is expecting it after their back-and-forth banter in the first film. But Wade surprises us by acting like everyone’s favorite obnoxious brother: he comments on how cute she is, and then makes a point to say hi to her every time he sees her. He’s not even being a condescending dick about it, when he could be making snide remarks or pussy-eating jokes. He has a lot of opportunities to say something, and he simply doesn’t. He enthusiastically shouts, “HI YUKIO!” when she’s around, acknowledging her without tormenting her or Negasonic. He has several chances to make a big deal out of her same-sex relationship, but he doesn’t – he accepts them without batting an eye, treating Negasonic’s girlfriend with respect. No questions, no teasing and no long-con jokes. 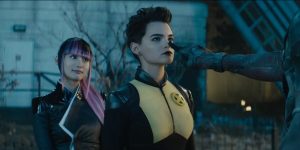 Next up is Domino. At first dismissed based on her ability, Domino doesn’t back down from her definition of her superpower, muscling her way onto the X Force with a smile and a strapping sense of confidence. In one of the best psych outs of this year, the rest of the team dies while she not only pulls through a poorly-planned strategy but singlehandedly hijacks a prison transport. From there, she manages to give some quantifying background on the evil orphanage run by the downgrade televangelist knockoff, save the day and look completely unimpressed with the antics of Deadpool while doing so. The best part? She never once becomes the love interest. While Deadpool may have knocked her superpower at the beginning of their interactions, he comes to rely upon her luck and he doesn’t objectify her. She’s not Vanessa’s replacement. She doesn’t get paired with Dopinder (Karan Soni) or Cable (Josh Brolin). She doesn’t become a component of a love triangle for Negasonic or Yukio. She’s allowed to be a kickass woman who gets to do her own thing while looking at a bunch of misguided curmudgeons and asking herself why she didn’t finish college. On top of that, Domino is a black woman who doesn’t fall into he trap of getting placed on an exotic pedestal: she walks side-by-side with Cable and Deadpool into battle, not behind. No one comments about her race or her gender: she’s an indispensable member of the action. 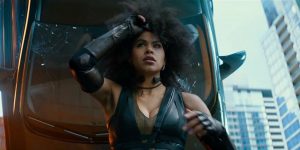 Really, I could watch her all day.

A movie that pokes fun at superhero fare managed to get two major social issues right without being self-congratulatory about it. Let’s be frank: as a member of the LGBTQ+ community, we sometimes get shoehorned into something as a way to say, “Look, you have your representation – happy now?” It’s a begrudging action: we know damn well that we still have a long way to go in terms of being fully welcome. Deadpool 2 treating Negasonic and Yukio in a way that’s respectful and not noteworthy makes it normal, and it’s something a bi preteen version of me would have loved to have seen because it would have meant that there was a spot in normalcy for me too. In not making a big deal, they made it into something far larger: the fact that people like this are okay and just exist, which is terribly freeing. Ditto with Domino – as a female member of a superhero squad, Domino isn’t just there to fill a romantic role while throwing a few key punches. She’s not the Black Widow, who is frustrating to so many women I know because she’s just there to look hot and be available for hookup (remember the whole Renner/Evans “she’s a slut” debacle?). You want to watch Domino because she’s not your typical beautiful woman who has powers: she’s got a backstory, she’s engaging, she’s strong, she’s smart, she’s kind, and she does not give one single fuck about your opinion of her. That’s not to say that Beetz isn’t a gorgeous woman – she’s beautiful and way the hell out of my league. Beetz elevates Domino to much more than the eye candy of the team – she’s an essential member, and a force with which to be reckoned. She’s also a black woman, giving representation to a group that has been facing off for some time already in the world of cosplay. Domino being so normal without having to play the saucy love interest means that we’re going to get more characters like her: a more diverse, well-rounded, balls-out fun entry into a world that until recently only liked their women a certain way. 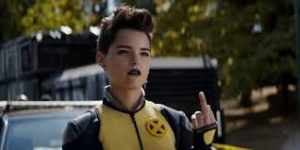 Deadpool 2 took a lot of social issues and turned them into something normal. That’s no easy feat. This film gives those of us in those groups the chance to see ourselves as something worthy of inclusion without screaming, “We’re all-inclusive! Give us a cookie!” It demonstrates that you can be gay, you can be female, and you can be black without having to surrender to the role of damsel in distress, joke or love interest. You can be a person in Deadpool’s sandbox. You just might want to stay away from any snacks he offers.