Warning: count(): Parameter must be an array or an object that implements Countable in /homepages/45/d96662078/htdocs/clickandbuilds/TheBackseatDriverReviews/wp-includes/post-template.php on line 316
↓
Home→Horror→There’s a Storm Hitting Us in Six Hours, and We’re Gonna Find Out Who’s Who: A Nutty Theory About The Thing and Stranger Things

Stranger Things is coming back in the fall, and the fever is already starting: Funko Pops, trailers, interviews, Finn Wolfhard’s coming turn in It. Everyone is freaking out over the trailer and providing speculation concerning the way things left off and where they’re going: how are they going to bring Eleven back? Is Will really okay? Will we ever get justice for Barb? It’s that last one that has me wondering. Allow me to throw my conspiracy-theory hat into the ring, because I’ve got a doozy here for you that involves Barb and The Thing. 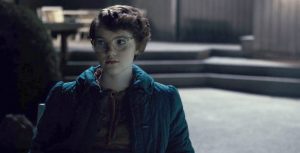 First thing’s first: Barb is dead. There was a funny Huffington Post article that declared this in September 2016, and the Duffer Brothers have been adamant that she has indeed departed the land of the living. They’ve said that they’ll get justice for her, but make no mistake, this is an ex-Barbara. She is no more. She has ceased to be. You can throw her against the table and scream, “Hello, Barbie!” but she will not be getting up from her slug-infested final resting place in the Upside Down any time soon. 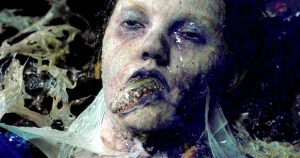 There’s no bouncing back from this. I should know. This is me on a Monday. And a Tuesday. And the rest of the week.

Except, well, this is a supernatural show that features references to so much in the 80s pop culture scene, including some stuff that wasn’t a commercial success at the time but has since become a cult classic. Stuff like John Carpenter’s The Thing. Let’s back up for a minute: in 1982 – which fits the Stranger Things timeline – a scrappy young lad named John Carpenter put together an adaptation of John W. Campbell Jr.’s novella Who Goes There? Carpenter had recently completed Halloween 2, The Fog (the only one as far as I’m concerned), and Escape From New York. Things were looking good for him. And then The Thing happened. The critics hated it. Roger Ebert was particularly dismissive, but Alan Spencer’s scathing writeup was far worse. We’re talking the time I evaluated a college course as, “I could have accomplished more playing Pick Up Stix with my butt cheeks than attending this class” (that was me, SUNY Brockport Theatre Department. That. Was. Me.). The tone was clear: critics thought it was gross and unnecessarily violent, and worse, it was in direct competition with that smug little bastard we all hate, Spielberg’s E.T.: The Extraterrestrial. Everyone wanted to see their favorite uncircumcised penis guzzle candy and be best friends with a little kid whose divorcing parents and federal government were bringing him down. Badass Kurt Russell and Keith David duking it out with evil Wilford Brimley didn’t stand a chance in hell against that cute little sombitch, loathe as I am to admit that. So taking that into consideration, it’s pretty wild that a film that wouldn’t have had the most extraordinary box office success for adults – let alone a group of 12-year-olds – would wind up figuring into the show, but the Duffers made damn sure to include it at least twice: once in poster format in Mike’s hideout, and once while their teacher, Mr. Clarke, watched it with his girlfriend whilst gleefully explaining the special effects. So why would they include something that wouldn’t have been as relevant back then, let alone go out of their way to explicitly reference it twice? The brothers certainly have an eye for theme and detail – why not pick something more mainstream and on-the-pulse for the early 80s, like Blade Runner, Tron or Raiders of the Lost Ark? Surely, there are parallels galore between Raiders and Stranger Things – after all, the quest to develop weaponry that will give the United States an edge over Russia smacks of the sociopolitical commentary of the era. Why pick something no one had seen, or at least panned heavily, to reference?

This is where your ears need seatbelts. I think Barb is going to wind up being a reference to The Thing.

The Duffers are not hacks. They put specific references as clues into every tiny little thing they do in this series, from song choices to movie references. Yes, it’s a sly nod of the hat to the familiar, but it’s much more than that in most cases. It’s not that huge of a leap to think that there’s a reason for them to reference The Thing not once, but twice. On top of it, in context – which they thrive upon through sly winks, nods and painstaking research (I mean, look at everything they put into the Dungeons and Dragons game the gang is playing) –The Thing is not just something that would have shown up just because. There’s a poster in Mike’s room for a movie that a group of 12-year-olds wouldn’t have been old enough to see; hell, Will was too scared to watch the far more mainstream Poltergeist, as Joyce points out (sidenote: I may now have to write a comparison now between Zelda Rubenstein and Millie Bobby Brown). Futhermore, VHS didn’t fully explode until 1985, a good two years after the events of this season – it would have been a stretch to think that our boys had rented this film. The movie poster alone is a tough explanation, but for Mr. Clarke to go a step further and detail the special effects to his girlfriend of how a creature is achieved… that’s screaming that they want to do something with it. And we shouldn’t ignore it; we should start trying to figure out what it is that they’re hiding in plain sight. 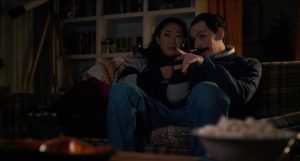 No one points in this thing without reason.

The titular creature of The Thing kills then absorbs its prey, making it an exact copy that mimics and blends in, undetected. It makes damn sure to stash the body in order to keep up the ruse and assimilate undetected, but it’s a pretty obviously gross death when someone stumbles upon a corpse. When we last saw Barb, she was crawling with slugs and in no way alive. Barb wasn’t surviving like Will – Barb was dead as dead could be, horribly murdered and functioning as a feast. The town figured she’d just run away, but Nancy and Jonathan knew the truth: she encountered something terrible and was dead. She wasn’t coming back; whereas everyone else thought she was missing, they knew that she was actually dead, and that knowledge couldn’t be publicly shared. They couldn’t say anything without sounding completely nuts to the rest of the world or blowing the whistle on a huge conspiracy. If Steve hadn’t witnessed the battle in which Nancy and Jonathan engaged, he wouldn’t have believed them either. And so they held on to the terrible knowledge that Barb is dead, not being able to let anyone know that no, she hadn’t run away – she was gone. That in and of itself is enough fodder for the psychological issues of season two. So what happens if she suddenly shows up at the tail end of season two or during season three? Who can they tell? The groundwork is there for Nancy to open up to her mother (that whole “talk to me” point was made damn clear in the first season), but can she go to anyone outside of Hopper, Joyce and then men in the sealed suits? Will anyone else believe them when they’re busy celebrating the return of someone they thought was missing? And what kind of suspicion would that bring into play? What kind of motives on the part of the inhabitants of the Upside Down? 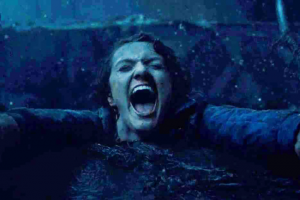 In The Thing, Carpenter doesn’t give a motivation for the creature outside of a crashed spaceship and a need to reproduce; in Stranger Things, this creature’s homeland gets invaded, but we’re left wondering if that world itself isn’t dying, with its constant ash and search for other food sources. We see falling snow in Hawkins, and a need to invade when the two worlds collide. We see a creature that can’t blend in on its own – it’s got to work in the shadows, and must be detected carefully by drawing it out with blood and correct dimensional fracture points. It’s acknowledging something people don’t want to admit is there: the outsider that doesn’t belong here, much like Eleven in the modern world after being sheltered for so long. The thing that doesn’t fit. So how do you make progress? You blend in. You find something that can pass, you shape yourself to it, and you slink around hoping no one else notices. Except that in this case, there are people who care about the shape that was taken; it’s not just some coworker. There are people that know. There’s potential for conflict, demonstrated in front of us in plain sight by what is now regarded as one of the greatest horror films of all time. I think the Duffers are right when they say Barb is dead; I think they’re being truthful, but I think they’re selecting their words carefully. Barb is dead, but that doesn’t rule out that something could come back wearing her face, sneering at our heroes in a game of chicken, daring them to make themselves sound crazy by confronting her in public and looking as bonkers as MacReady when he’s testing blood. Think of the pure levels of terror at seeing Barb alive and well in front of you, knowing that’s not Barb at all. Think of all the scenery Shannon Purser could chew. And with the clues and statements given by the Duffers, they could make that scenario one of the most terrifying pieces of television to hit since Pennywise first offered Georgie a balloon, and they’d be completely true to their word that Barb was both dead and primed for justice. 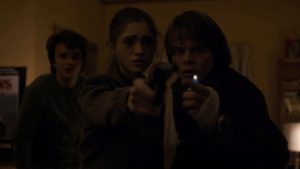 This could be a completely bunk theory, but you have to admit that it’s fun to sit back and speculate. And that’s really the point of thought-provoking television: something that gets you to see the connections, to embrace the characters, and to bring it all together in a way that expands and challenges the mind. I mean, hey – it worked for Joyce, didn’t it?