Warning: count(): Parameter must be an array or an object that implements Countable in /homepages/45/d96662078/htdocs/clickandbuilds/TheBackseatDriverReviews/wp-includes/post-template.php on line 316
↓
Home→Horror→Thinking Deep Thoughts: Class and Education in Seven

Oh this film is a goldmine of criticism. David Fincher’s Seven (1995) covers the investigation and pursuit of serial killer John Doe (Kevin Spacey) by soon-to-be-retired homicide Detective Somerset (Morgan Freeman) and new transfer Detective David Mills (Brad Pitt). Doe engages in a game of cat-and-mouse with the detectives as he crafts murders around the seven deadly sins. Most people – including Detective Mills – write Doe off as a nutcase, but there’s something more that writer Andrew Kevin Walker inserts into the story: Doe and Mills represent a class divide, of which the educated class does not come out looking pretty in the least.

Doe’s literary references and diction are particularly telling of the access to education which he obtained. Doe references Chaucer, Capote, de Sade, Dante and Saint Thomas Aquinas – all staples of classical literature. While some of their works are taught in lower-level educational tracks, Doe goes after authors who are noted for religious works at the college level. Likewise, he somehow manages to bankroll a life off the grid that allows him access to books, drugs to sedate victims, various weapons (including extreme S&M gear that couldn’t have been cheap), chemicals that burn, extra rent for an entire year, and enough food to feed a man into oblivion. It’s not cheap to be John Doe, which makes you wonder what kind of life he led – more to the point, just how much richer than the average bear was John Doe? On top of that, Doe seems to distance himself further from the rest of society in his observations of them: “What sick ridiculous puppets we are, and what gross little stage we dance on. What fun we have dancing and fucking, not a care in the world, not knowing that we are nothing. We are not what was intended.” He’s a judgmental piece of work – you have to give him that at least. He says of his victims:

“A woman, so ugly on the inside she couldn’t bear to go on living if she couldn’t be beautiful on the outside. A drug dealer, a drug-dealing pederast, actually! And let’s not forget the disease-spreading whore! Only in a world this shitty could you even try to say these were innocent people and keep a straight face. But that’s the point: we see a deadly sin on every street corner, in every home, and we tolerate it. We tolerate it because it’s common, it’s trivial. We tolerate it morning, noon, and night. Well, not anymore. I’m setting the example. What I’ve done is going to be puzzled over and studied and followed … forever.”

Jesus Christ, this asshole mansplained salvation to the cop whose job it is to enforce the law, but it’s not true mansplaining because he’s selecting someone of the same gender when he’s speaking down. Doe’s explanation goes beyond the condescension we’re culturally balking at now: Doe believes he’s far smarter than everyone else and is therefore the apotheosis of authority. Doe thinks we’re all ridiculous and that our existence is hypocritical and worthy of torment; as such, he feels it’s not only his rightful place to point out these observations, but that he also gets to without any cures or advice and put us in our places. Nevermind that the nature of sex work and overeating can be debated nowadays – to Doe, it’s an absolute, he’s always right, and no one can tell him otherwise because he’s read the books and compiled a bibliography. Nevermind that some of the “sinners” (given, I can’t excuse the drug-dealing pedo, but a model? C’mon.) are regular people, and there are quite a few larger problems out there he could be focusing on, like ending institutional racism, childhood starvation, spousal abuse or human trafficking. Nevermind that it’s human nature to gasp and feel sorry for a person who’s been mutilated. He didn’t read that in his precious book, so he cares fuck all about those aspects of the human experience. He cherry-picks the ills of the world based upon classical literature, which is something traditionally within the grasp of the educated class. Education is typically reserved as a status spoil achieved by those who have the time to read rather than labor. 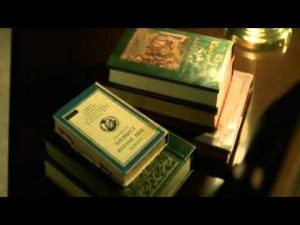 Any dick with a library card…

Mills, on the other hand, demonstrates a far less polished approach in both his methods, observations and judgments. Mills has difficulty pronouncing “Marquis de Sade,” and he uses the term “faggot” as an insult (for the record, that is NEVER okay), which isn’t exactly enlightened behavior. He’s also quick to write off Doe’s actions as insanity: “Come on, he’s insane. Look, right now he’s probably dancing around in his grandmother’s panties, yeah, rubbing himself in peanut butter.” Stereotypical, yes, but his first thought is to dismiss Doe as a dime-a-dozen “crazy” that kills people. Mills isn’t even cautiously positing mental disorder that has turned violent – this is not a considered look at mental illness, motive and method. Mills is on the opposite end of the same spectrum as Doe – he tells victims’ friends and relatives that he’s going to find who did this, proof of a possession of idealism that Somerset finds unrealistic and over-simplified, complete with oversimplified and not entirely researched evaluations. While you can still have a college degree and remain idealistic, there’s something black-and-white about it for Mills that screams he’s not packing a PhD nor critical thinking – he’s too quick to write people off, he uses colloquial speech too freely, and he clings to a sense of order in the world that’s typical of someone who accepts a particular station. As much as we may not want to see it, David Mills works a position that is still debated as either blue-collar or white collar. He hasn’t had time to read Dante or Aquinas because he’s too busy pounding pavement to find murderers. 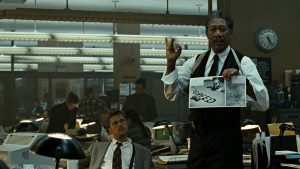 These guys are going to have to hit the books.

The contrast created between the two is damning. We can side a bit more with the hard-working Mills because he’s closer to ourselves, while Doe plays the part of the privileged upper-class. Mills injures himself and spends his week trying to stop someone from brutally murdering people, while Doe sits on high and doles out judgment. Mills is out doing the dirty work catching the bad guys, and he’s more relatable to us because he’s out trying to make the world a better place as opposed to reading and rolling his eyes at the rest of us. Mills reserves his judgment for those who have transgressed and hurt others. Doe, on the other hand, represents the obnoxious, smug perpetual student that fancies himself a nihilist because his means give him the time to do so. Doe can think deep thoughts about human nature and how much we all suck because he’s got the time and the bankroll, with little regard to the realities of actually fixing the mess that is the world. How we’re supposed to lean is up to us, but it’s fairly clear by the monstrosity of Doe’s actions and his condescension that we’re not supposed to say, “Well, he has a point.” We see the suffering he inflicts, and you can’t help but wonder if Doe would still be like this if he had the same problems as a working-class man scraping by. Would Doe have the time to think so deeply if he had three kids to feed? Would be he so quick to judge if he and his wife hadn’t had sex in two years because they were working opposing shifts to support their family? Would he be such a fucking sanctimonious jackass if he didn’t have the time to go to the library, check out a book, fancy himself a thinker and start passing judgment on the so-called simple-minded? Is this killer a symptom of privilege – can we classify ennui as a classist disorder for those that have the free time to devote themselves to deep thoughts? 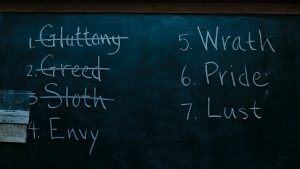 Somerset tells Mills at one point, “He’s not the Devil. He’s just a man.” That’s just it – Doe isn’t god. He’s just a man. A judgy prick with far too much time on his hands to point out everything that we’re doing wrong rather than putting in the effort to make the world right. It’s a special person that can take a look at a huge mess and try to make their corner of the world better – those are the ones who truly make the world better and do some of what we’d consider god’s work. For Doe, though – and for many others – it’s far easier to point and explain how you’re wrong and why you’re right. Just don’t be too surprised if someone tells you to join the real world rather than judging on high.