Warning: count(): Parameter must be an array or an object that implements Countable in /homepages/45/d96662078/htdocs/clickandbuilds/TheBackseatDriverReviews/wp-includes/post-template.php on line 316
↓
Home→Horror→Weekend Movies: Five Reasons to Watch The Transfiguration

A trailer can sometimes sell me on a film without hearing any buzz whatsoever – usually, it’s a combination of press and preview. Writer/director Michael O’Shea’s 2016 effort The Transfiguration had me at the trailer, and it wasn’t until after I had watched the trailer that I started hearing buzz from the Cannes Film Festival. This film is a good egg that tackles some interesting issues. Here are five reasons to watch it this weekend. 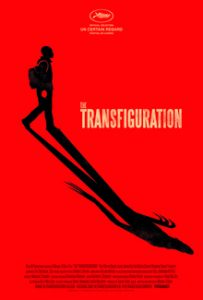 That’s not a bad thing, either. O’Shea’s script follows bullied orphan Milo (Eric Ruffin), who struggles with dark impulses and the belief that he could be turning into a vampire. Along the way, he meets Sophie (Chloe Levine), a young neighbor who struggles with depression and cutting. Every time that there’s a hint of a plot concerning vampirism, someone wants to make it into the next Let the Right One In. Don’t get me wrong, that’s nowhere near a bad film, but not every film that features bloodsucking has to be just like that one. While it features themes of bullying, isolation and violence, The Transfiguration is its own entity.

Milo could have been written as any type of kid, but placing this story in the middle of an urban neighborhood that has issues with crime and gangs gives it much needed diversity from half the crap that’s on the market. Let’s face it, horror still has this bad habit of being pretty white. We’re making some progress, but I don’t think that there’s enough representation in the community of color as there could be. I want to see that – horror is the medium through which cultural fears are expressed, and as someone who hasn’t had the experience of being a black kid in the city, I want that perspective. I think we need more of the black voice in horror.

While Ruffin did an outstanding job (and I hope he works in this genre for years to come), I’d be remiss if I didn’t call out Aaron Clifton Moten’s performance. Moten gave a portrait that was muted yet full as Milo’s older brother Lewis, someone who clearly wasn’t ready to take care of a troubled adolescent and isn’t willing to make the self-sacrificing effort we’re so accustomed to seeing. This is a combination of writing and a good actor. Keep an eye out for Ruffin and Moten both. 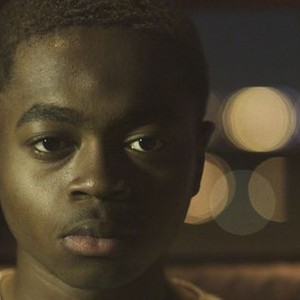 I want to see him in more things.

The character Sophie had a great one-two punch going for her: she was well-scripted by O’Shea and well-acted by Levine. Watching a teenage girl attempt to fill the emptiness through sex, alcohol and cutting can be a bit too real for some, but Levine makes it work. Watching that same character reach out and try to make a connection – and watching her start to feel something aside from a dark hole – is an intimacy that’s tough to capture.

This film has some great shots in it. These shots get accompanied by stretches of either silence or white noise. The technique works to add a vibe that’s contemplative and isolated. It’s not disorienting, though – there’s something comforting. It’s a demonstration that being alone isn’t always a bad thing. There’s a big difference between solitude and loneliness. 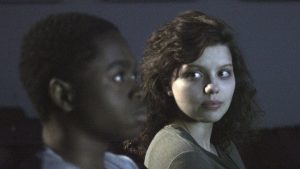 Not every moment requires dialogue.

#5 – The line between fantasy and reality

O’Shea creates sequences wherein Milo drinks blood, but there’s a blurry line between what’s real and what’s going on in his head. Sometimes, it’s apparent that Milo’s mind is wandering. Other times, not so much. The audience is left to wonder if this kid is really a killer, or if he’s just that far gone into his mental issues. A bit disorienting, but it’s nice to have something that doesn’t always give you the answers.

The Transfiguration is currently streaming on Netflix.