Warning: count(): Parameter must be an array or an object that implements Countable in /homepages/45/d96662078/htdocs/clickandbuilds/TheBackseatDriverReviews/wp-includes/post-template.php on line 316
↓
Home→Horror→Trust No One: Addiction In The Evil Dead

I have to hand it to Fede Alvarez and Rodo Sayagues: they managed to take a movie I loved and remake it in a way that was fresh, deep and meaningful. Well done, guys – I’m not the biggest friend of remakes, so this was a real treat. I think part of what makes The Evil Dead remake work so well is the fact that it didn’t seek to strictly ape its predecessor in every last way possible. The method of relating addiction to demonic possession was genius. In fact, it’s an extraoridinary statement on the credibility and struggle of an addict, as Mia (Jane Levy) seeks to overcome her chemical dependence. 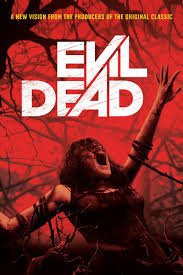 Finally, a remake that figured out how to retell a story without rehashing every last detail.

Early on in the film, Mia’s credibility takes a massive hit before the possession even happens. We learn through Olivia (Jessica Lucas) that Mia had tried to quit heroin the year before, and that her attempt had only lasted 8 hours before she broke. That wasn’t the end of it, either: Mia went on to overdose on the drug, to the point of clinical death. The group is concerned that this attempt may not be terribly sincere. In fact, Olivia’s demeanor is borderline dismissive, as she tells brother David (Shiloh Fernandez) that, “This time, the only way is the hard way.” Olivia doesn’t seem to have too much empathy for Mia and her struggle, assuring the group that “[f]rom now on, she is gonna do whatever it takes to get out of here.” Eric (Lou Taylor Pucci) is a bit more sympathetic in his approach, telling her, “We can’t lose you again. You’re going to have to stick it out this time.” The group makes it clear that they don’t feel that they can trust her: she’s going to say and do whatever it takes in order to squirm out of facing her addiction. Despite that she wants help, there’s distrust that she will actually follow through.

This is where the events leading up to the actual possession of Mia present multiple issues. When she’s screaming in the throes of withdrawal, she keeps mentioning that she smells something bad. She’s assured that she’s just being over-sensitive; however, for the first of many instances, Mia notices something that points to sinister forces. Once the bad smell is confirmed to be rotting carcasses, no one bothers to validate her initial observation; it’s as though someone else discovered this – someone far more credible than the addict. Shortly thereafter, Mia scolds Eric’s futzing with the Book of the Dead: “You shouldn’t have touched anything in that basement.” We know that this is correct beause we’ve got common sense and the knowledge that we’re watching a horror movie on our side; however, for our group, they know that they are dealing with someone who has violated trust previously. They take everything she says and does with a grain of salt. So when she’s in the rain begging god for things to get better, it makes sense that she’s the one that sees the demon at first, because she’s the one battling a type of demon. Shortly thereafter, it makes sense that in the re-imagining of the infamous tree rape scene, the demonic version of herself painfully violates her. And it makes sense that Olivia dismisses her recollection of these events as “crazy withdrawal talk.” Mia is not believed or taken seriously by anyone because she is an addict. 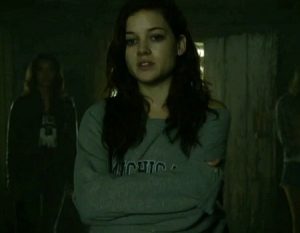 That’s okay, no one listen to the addict…

It makes sense that Mia is the one that gets possessed and ultimately survives the events of the film – she was the only one with something to truly overcome. While David had the guilt of his absence during his mother’s terminal illness, he’s strangely at peace with it. The rest of the group really doesn’t have anything in his or her background to triumph over. Mia is the one who struggled to be taken seriously due to a real illness, one that alienated her from everyone else due to behavioral precidence. The group dismisses her concerns as the muttering of an addict, which means that she’s not taken seriously despite that, had her observations been credited and investigated, she had the sense that something was wrong in the cabin. During her possession, it makes sense that she kills a dog, vomits blood onto Olivia, and taunts Natalie (Elizabeth Blackmore): addiction produces real hurt, whether physical, emotional, mental or financial, to those around them. This is a striking parallel to the disease with which she struggles. It’s reflective of the need to help the sick person you love while steeling yourself against the possibility that this person is going to hurt you again. So when the possessed version of Mia is buried alive, it’s symbolic that this portion of herself has to be killed in order to “find peace.” It has to die, while nothing like that exists in the other characters. They are killed as a result of the illness; once the possession of Mia is addressed properly, she’s able to return to her normal self, unlike the others. Mia is the only one with something to give up to the darkness. She is the only one that can provide that sacrifice because she has walked directly through hell. The others are unseasoned in this sense, and they perish.

The Abomination tells Mia at the climax, “You’re gonna die here, you pathetic junkie!” In return, Mia responds, “I’ve had enough of this shit!” That’s really what it comes down to: Mia has to make the determination herself that she is done with her drug addiction. In acknowledging this aspect of herself, Mia is the one that survives out of everyone. She causes the most harm, but she’s the one that has the chance to survive through her struggle. In the end, the possession is a type of purification rite: she could either be dragged to hell with everyone else, or come out on the other side stronger than ever. While down a hand at the end, she does indeed come through, and as an audience, we have a bit more compassion for this addict, which is something that our world needs more of. And that’s pretty groovy.