Warning: count(): Parameter must be an array or an object that implements Countable in /homepages/45/d96662078/htdocs/clickandbuilds/TheBackseatDriverReviews/wp-includes/post-template.php on line 316
↓
Home→Comedy→Weekend Movies: Five Reasons to Watch Love In the Time of Monsters

I had a chance to preview a film called Love In the Time of Monsters. It tells the story of two sisters that go up to a remote woodside resort, which happens to be the site of a nuclear waste dump. Some of the workers of the resort are exposed to this stuff, which turns them into zombies. Guys, this movie is fun. It is so much fun. Here are five reasons why you need to watch it this weekend. 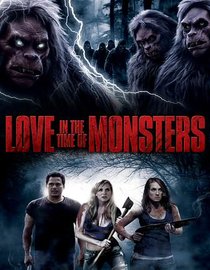 Did I happen to mention that the workers get turned into zombies while wearing Bigfoot costumes? Oh yeah, that totally happens. So on top of a zombie outbreak, you’re suddenly dealing a zombie Bigfoot outbreak. That’s right, flesh-eating Bigfoot. It’s as magical as it sounds.

The dialogue in this film is snappy and honest. There’s a whole lot of truth going on here, which is refreshing. When you see two bickering siblings mocking their overly-concerned mother on the phone, and the dynamic of needing to find the nearest bar in an isolated, cheeseball resort, you understand it all too well. I’m crediting writer Mike Skvarla for this. Here’s the other thing: the storylines wrap themselves up, they have heart, and they don’t leave you time to get bored.

Any film needs two things to be watchable: a decent script (see above), and good actors. You can have the script to Sophie’s Choice ruined by hammy acting; hell, Hamlet 2 tackled that idea in full force. The good news here is that we’ve got a cast that’s not only familiar with horror: they can act, and pretty well at that. We’ve got Doug Jones, Kane Hodder, Marissa Skell, Gena Shaw, and Shawn Weatherly on tap for this adventure. What they bring is equal parts believable and funny. Everyone is in complete control here, and it shows. This cast worked well together. 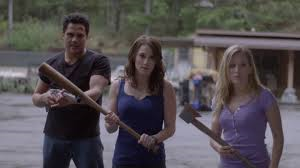 This group is totally believable.

I will only spoil one thing about this movie: Doug Jones’s Dr. Lincoln does his own theme music. For the love of all things holy, you have to watch Doug Jones do his own techno beat. It is a thing of beauty.

This film has a fun concept that starts out on a note that will make you laugh. It saunters between horror and comedy very, very easily. I’ll be honest, there was a point where I wondered if it was going to go bad on me, but damned if director Matt Jackson didn’t throw it into full gear and punch it into gleeful camp territory. Thing is, the campy turns – which I absolutely will not spoil – work so well. I’ve heard this film compared to Evil Dead 2. The blissful part: while you can see the influence, the influence doesn’t rule it. Love in the Time of Monsters is its own film, and it’s a knock-down, drag-out blast. 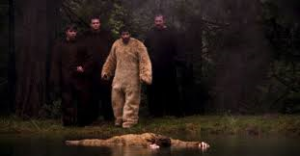 This one is a rental on Amazon. It is SO worth the money. Do yourself a favor and watch it.