Warning: count(): Parameter must be an array or an object that implements Countable in /homepages/45/d96662078/htdocs/clickandbuilds/TheBackseatDriverReviews/wp-includes/post-template.php on line 316
↓
Home→Comedy→Weekend Movies: Five Reasons to Watch Clerks (1994)

I don’t know about you, but I’ve been pining for nostalgia lately. Not going back as far as the 1980s, but heading to the time of my youth as a proud Xennial: the 1990s. No movie screams 1990s more than Kevin Smith’s cult classic Clerks (1994), which covers the misadventures of Dante Hicks (Brian O’Halloran) as he manages an extra shift at a Quick Stop convenience store over the course of one eventful day that just won’t quit. Here are five reasons to check it out this weekend. 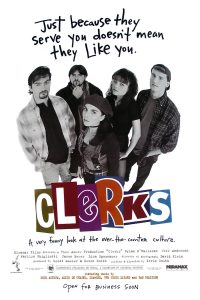 This is a battle cry for any fan of the movie, but it’s even more relevant if you’ve worked retail. For my fellow retail survivors, you know the drill: someone calls out sick, and then you get the panicked phone call from management to please, please, pretty please come in and cover. Somedays, you really need that day off, but you go in for either the extra cash or out of the (misguided) goodness of your heart. And you know what happens? The same thing that happens to Dante: crappy customers, no appreciation, and the longing to leave. Dante is so relatable, from the passive-aggressive signs he posts to the complaining. It was supposed to be your day off too, dammit.

#2 – The dark comedy is everything

I love dark humor, within reason (there are some jokes that go from pitch black to bad taste that lose me). Luckily, Clerks manages to stay well within that sweet spot of humor without veering into the poor taste territory, which is a feat considering some of the subject matter. Between the necrophilia, cancer jokes and pornography, that’s saying something. 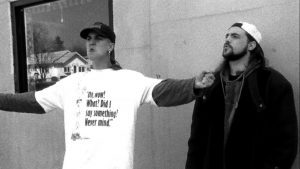 There’s a great piece of dialogue early on in the film that needs to be studied. Dante has a heated argument with his girlfriend Veronica (Marilyn Ghigliotti) over sexual partners. It broaches the subject of double standards, gender norms, and the parameters of communication and assignment of meaning to different sex acts. Given the current climate of slut shaming, I think a lot of conversation could be had over this scene. Plus, there are parts that are terribly funny. That always helps.

Jeff Anderson’s portrait of sarcastic slacker Randal Graves is iconic. Sure, Jay (Jason Mewes) and Silent Bob (director Smith) are funny, but Randal is next level hilarious. Part of that stems from the fact that the character inevitably reminds you of someone you know, whether it’s a sibling, colleague or best friend. The charm rests in the one-liners and scheming: we’d hate this person in real life, but then we look around, see someone like that, and realize how much of a blast that person is. There’s no shame in admitting you like Randal, because he makes life interesting and says everything you wish you could in a world without consequence. His speeches and sarcasm are the true highlight of the film. 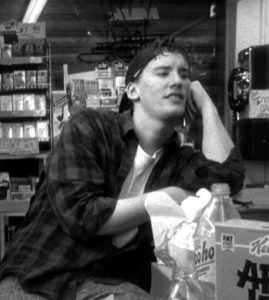 I aspire to this level of customer service.

The 1990s had a charm to it that shines through in filmmaking. A few films from this era were directed in black and white (hello, Pi [1998]). Many of them had great soundtracks, and Smith’s films are no exception. He put a personal favorite of mine in there: Girls Against Boys, who contributed the song “Kill the Sexplayer” to the soundtrack (Eli and Scott for life, bitches). Maybe it’s being a 90s kid, but the whole vibe established just takes me back and brings me joy. We need that right now.

Clerks is available for streaming on Netflix.