Warning: count(): Parameter must be an array or an object that implements Countable in /homepages/45/d96662078/htdocs/clickandbuilds/TheBackseatDriverReviews/wp-includes/post-template.php on line 316
↓
Home→Comedy→Weekend Movies: Five Reasons to Watch Delirious

I was listening to Prince’s “Delirious” and was reminded immediately of the 1991 jem of the same name. This one wasn’t a hit by any means – it only made $5.5 million back of its $18 million budget. Bomb city. However, for us die-hard John Candy fans, it’s a keeper. Candy plays a writer that smacks his head and winds up on his own soap opera, with the ability to change things via his typewriter (somewhere, a hipster was just born as I wrote that). So I’m recommending it for the weekend. Here are five reasons to watch it. 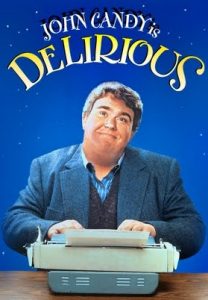 Obvious choice, yes, but there’s good reason: it’s John Candy. Candy was a talented comedian that made us like him because he was the witty version of you and I. Candy’s characters ran into real-life situations ranging from dealing with people you couldn’t stand to trying to work your way out of an uncomfortable situation to unrequited love. He had this effortlessly funny charm to him, and he never had to do a fat guy joke because he was that good.. Best part: you never heard stories about him the way you did and still do about other comedic actors. Let’s face it, while Bill Murray is funny, he’s an unbelievable dick by so many accounts. The Candyman was sweet and hysterical – and to this day, he’s sorely missed.

I’ve mentioned this before, but I grew up in the 1980s, which was the height of sublime soap opera obsession. My mom used to watch As the World Turns, Guilding Light, and The Bold and the Beautiful, and damned if those shows didn’t feature every cheesy storyline known to man. Harrowing health scares? Check. Babies switched at birth, highlighting the rich/poor class division? Check. Evil villains? There is only one James Stenbeck, people (although, Stefano was a pretty good close second). If you want some hiliarious reading, go over to Wikipedia’s page on the character Barbara Ryan; it really says all you need to know about soap writing. Delirious manages to take every plot convention you experienced on a soap and amplify it. It’s glorious if you’ve ever watched 10 minutes of a daytime soap. 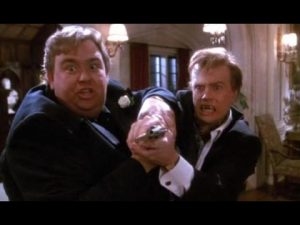 Blake is the shit.

#3 – There are some good gags in here

I don’t want to spoil these, but they totally go hand-in-hand with the above list. Not only does Delirious mock soap operas, but it does it with such abandon that it creates its own in-jokes. Watching a character make jokes about how Cleveland is a worse fate than death and then have the plot turn around to give a scathing statement on spoiled actresses is quite satisfying. You find yourself chuckling at both the easy laugh and the meta-gag. It’s a good time.

The early 90s were a magical time. People just weren’t ready to leave all that fashion and grandeur behind. As a result, we got to see the continuation of huge hair, pastels, and eyeshadow for days. It doesn’t age well, which makes it an unintentionally funny time capsule. Of all the ages, of all the great decades… we get to remember that awkward transition from 80s decadence to 90s grunge as it fought so valiantly to hold on. You’ll cackle based on the outfits alone. 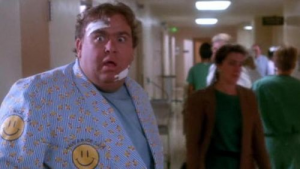 For real, this is every writer’s worst nightmare: that you’re going to be trapped in something you wrote with the characters you’ve created. I know whenever I write fiction, that’s one thought in the back of my head: I am a cruel god, and heaven help me if those characters get their hands on me. Listening to the lament of realizing that you’re in your own personal purgatory hits a little close to home when you write horror. It’s a nightmare scenario. Again, though, we’ve got Candy to help us see the silver lining. Writer friends, this is a fun look at what might be awaiting you on the other side.

This one’s a rental from Amazon. Definitely worth it for a good laugh on an almost-spring evening.