Warning: count(): Parameter must be an array or an object that implements Countable in /homepages/45/d96662078/htdocs/clickandbuilds/TheBackseatDriverReviews/wp-includes/post-template.php on line 316
↓
Home→Animated→Weekend Movies: Five Reasons to Watch Extraordinary Tales

Edgar Allan Poe and October go together like beer and pretzels. Even better, soft pretzel sticks and beer cheese for dipping. Crap, now I’m hungry. Where was I? Ah yes, Poe. Good ol’ Edgar had a knack for looking into what made our skin crawl in a genteel sort of way. And what better way than to appreciate that creepy quality than by animating some of his stories? That’s exactly what the 2015 film Extraordinary Tales, directed by Raul Garcia, seeks to compile: give Poe tales in animated form. Here are five reasons to watch it this weekend. 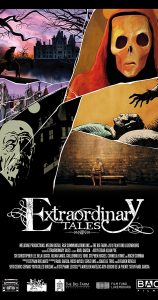 The lineup of shorts is pretty impressive. “The Fall of the House of Usher.” “The Pit and the Pendulum.” “The Tell-Tale Heart.” “The Facts in the Case of M. Valdemar.” “Masque of the Red Death.” Have to admit, this is a who’s who of Poe short stories. That’s like putting together a baseball team with Lou Gehrig, Babe Ruth, Shoeless Joe Jackson, Jackie Robinson and Cy Young. Wait, I think I just made a successful baseball analogy. I need to go lie down.

I really kind of hate it when an anthology can’t figure it out how to break up its pieces. Some of them will long overstay their welcome; others just sort of blend together when the pieces don’t really have much to do with one another. As much as I loved XX, for example, it had some rough transitions between subject matter. Extraordinary Tales knows how to balance out the duration of its segments with the transitions. The result is a gorgeous, seamless piece. That’s something worth it right there. 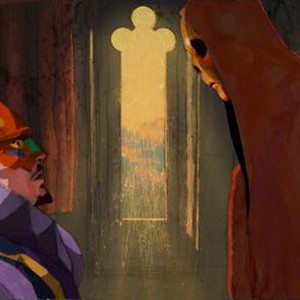 Christopher Lee narrates one of my all-time favorites: “The Fall of the House of Usher.” That in and of itself is about as magic as Iggy Pop narrating “The Tell Tale Heart” in Closed on Account of Rabies. Better yet, not everyone is an actor: Guillermo del Toro reads “The Pit and the Pendulum,” which makes my inner goth girl squee with joy. Bela Lugosi reads “The Tell Tale Heart,” and Julian Sands takes on “The Facts in the Case of M. Valdemar.” It’s so, so good. There are some extraordinary readings. Check it out, especially as we don’t have some of them with us anymore.

There’s a mix of CGI and traditional animation in this film. Special call out to David Carriere, Tomislav Findrik, Raul Marinez, Gilles Rudziak, Antonia Santamaria, Serge Ume and Regine Waleffe, who compromise the animation department of this film. Ditto to Javier de Prado and Regine Waleffe, who supervised the visual effects, and Cedric Gervais, who was in charge of the art department. This film is visually stunning, and they obviously knew their shit. 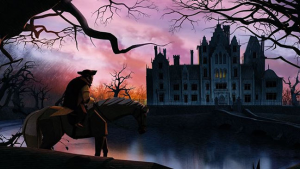 I mean, LOOK at that.

The expectation of an animated film is that the settings and images will be light and airy. Animation, after all, carries a sense of whimsy: it’s just a drawing, just a picture, so it has to be light and happy. This film does not adhere to that expectation – it stays truer to the spirit of Poe tales rather than the demands of animation convention. This quality makes it dark, overcast, and a bit bleak at times, but you know what else is it? It’s absolutely beautiful. There are moments of pure beauty captured in these animated tales that will cause you to pause. This film has a melancholy that possesses great beauty.

Extraordinary Tales is available on Netflix for streaming.