Warning: count(): Parameter must be an array or an object that implements Countable in /homepages/45/d96662078/htdocs/clickandbuilds/TheBackseatDriverReviews/wp-includes/post-template.php on line 316
↓
Home→Bullshit→Most People Are So Ungrateful to be Alive: Addiction in the Saw Franchise

It’s Halloween again, which means that we’re getting yet another Saw movie. What started as a short film in 2003 turned into the first feature-length motion picture in 2004, courtesy of James Wan and Leigh Whannell. Today, we’re up to installment number eight, with the tortures bigger, bloodier and far more graphic than the original. We’re often presented with people who have done something morally unsavory, that now must escape a trap that represents their own shortcomings lest they die. It’s a piece on moral relativism and what a social offender truly deserves. However, we’re overlooking something that’s snuck into the franchise in multiple instances: it subtly dismisses addiction and rehabilitation as something that can be cured by being scared. 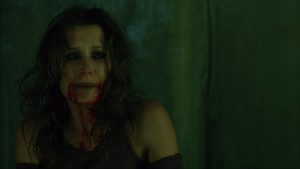 Yeah, no. It takes more than this.

First, some background. Drug addiction is a sticky, tricky spot. I’d love to define what is it absolutely, but the largest problem with addiction is that the research is not there to concretely tell us the nuts and bolts of how it works. True, we know that it’s a physical and psychological dependence upon a substance. We know that some are more susceptible to it than others. We know that once you go down that road, it’s extraordinarily difficult to stop, because it’s a disease – you don’t just cure asthma or diabetes by telling your body, “Hey, knock it off.” There are physical as well as psychological intricacies. The problem with treatment stems from the lack of understanding: it’s not always perceived as a disease, there’s a ton of social stigma that prevents people from getting help, and the lack of knowledge on the innerworkings of addiction make for treatments that only go after the symptoms as opposed to the root cause. Those three things put together can completely botch a recovery attempt for an addict, and I can’t help but feel for these people. There’s anger and hurt on the side of those who love the addict, and there’s nastiness to feed an illness on the side of an addict. It’s a disease, and we need more knowledge to beat it. (If you want more information on some of what we do know about addiction, I highly suggest you visit the Mayo Clinic’s site, as well as a paper concerning the drug addiction treatment of incarcerated women. We’ve still got a long, long way to go, which is the understatement of the year.) 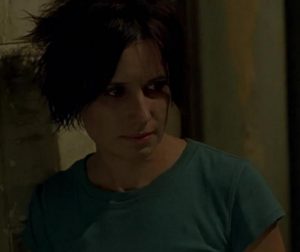 Again, not a typical case.

Where addiction comes into play in Saw is woven throughout multiple pieces. In the first installment, we meet Amanda (Shawnee Smith), who is forced to think fast and dig through the stomach of a man trapped with her. She gets dismissed a bit by Detective Tapp (Danny Glover), who tells her, “You are in fact a drug addict, Mandy. That is why he picked you.” The logic of Jigsaw is to select someone who is deemed “ungrateful” for their life – someone who needs to wake up. The extreme shock of surviving the reverse beartrap puzzle renders Amanda grateful and reformed in her addiction. In Saw II, we find out that she’s now placed Jigsaw into the role of father figure that’s responsible for turning her life around, and she seeks to become his apprentice. She carries on this role in Saw III, Saw IV and Saw V, but then gets some greater explanation in Saw VI: Amanda assisted in a botched robbery that left the unborn son of John (Tobin Bell) and Jill (Betsy Russell) dead. John later presents Amanda and her progress to Jill, an addiction counselor, under the guise that Amanda is proof that his methods of curing addiction are the ones that work. She’s a case study in scaring someone straight, literally. 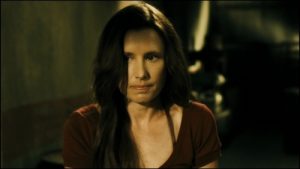 Not a lab rat.

To say that this treatment of addiction is problematic moves from wrong to horrific on so many levels. First off, Amanda is described as not only an addict, but a heroin addict – a notoriously tough addiction to treat. Heroin is known for inducing a euphoria that reportedly blows orgasm out of the water; conversely, the withdrawal symptoms can lead to death if left untreated, which makes quitting the drug insanely difficult. It’s not like Amanda is going to conquer addiction by getting scared – many addicts go through things like rape, robbery and overdoses, and these scary experiences do not deter them from getting high. It’s a fucking illness. Trying to scare her into quitting is like taking someone with cancer through a well-constructed haunted house attraction and hoping that the jump scares make their cancer go away. It’s not plausible to think that scaring someone is going to magically make a disease go away. You wouldn’t expect that from someone who had diabetes or a heart disease or aggressive strokes – why the fuck would you think that scaring the living crap out of someone is going to make a mentally and physically ingrained experience go away? Again, this goes back to the stigma, misconception and treatment of symptoms that gets us into this mess with addicts: there’s a snide side-eye to Amanda for even being an addict in the first place; there’s a complete lack of understanding how her addiction actually works; and without that understanding, she can’t actually be cured of her disease – because no one understands how addiction functions, treating her is only going to treat some of the symptoms she displays, which means the illness is going to keep coming back. If you notice, she replaces one addiction with another: heroin for assisting John. Amanda’s not shooting up, but she’s certainly behaving in an obsessive, all-consuming pattern. John has done nothing to cure her: he’s just made sure that her attention is focused on something other than explicit chemicals. He’s found a replacement high for her under the guise of appreciating her life. That’s not helping; that’s transference. It’s like replacing a gambling addiction with fanatical religious devotion: the illness is still there, but the presentation has changed ever so slightly to fly a bit more under the radar in a socially acceptable format. 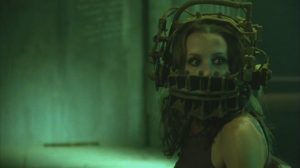 Not approved by the FDA.

At the end of the day, it’s disconcerting to realize that no one has changed for the better in these films. Amanda is still an addict – she just happens to have a compounded element of PTSD that has forced her into some extreme Stockholm Syndrome. The issue here is the calculation of Jigsaw: as an addict, she was something that needed to be cured of substance abuse: now that he’s able to manipulate her addictive personality, it’s okay that she houses those capabilities. Of all things, John is not trying to cure her. He’s trying to use her for his own ends. And that, my friends, does a deep disservice to understanding and treating addiction. There’s no gratitude. There’s no come to Jesus moment. There’s no new lease on life. There is only usefulness to someone else’s machinations by the exploitation of an illness.

(Author’s note: to anyone currently or previously struggling with addiction, I deeply respect all you’ve endured as you’ve slugged your way out of hell. If you’re still in that hell, I hope that available resources can help ease your suffering. Don’t ever let someone make you feel bad for having an illness.)