Warning: count(): Parameter must be an array or an object that implements Countable in /homepages/45/d96662078/htdocs/clickandbuilds/TheBackseatDriverReviews/wp-includes/post-template.php on line 316
↓
Home→Sex→Weekend Movies: Five Reasons to Watch Kids

In 1995, Larry Clark directed Harmony Korine’s script for Kids. The film chronicles the life of 15-year-old Telly (Leo Fitzpatrick), who spends his days wandering aimlessly around New York City whilst trying to bed virgins. One of Telly’s past conquests, Jennie (Chloe Sevigny), has just found out she’s HIV positive; the only person she’s slept with is Telly, and she sets off on a search to tell him. I will say right now, this is a film people either love or hate. I think it’s got merit. Here are five reasons to watch it this weekend.

I cannot stress this enough: people are doing some seriously unsafe shit when it comes to sex, and it’s gotten worse over the years as abstinence-only sex ed and the decrease in public clinic funding has wormed its way into a foothold. Does sex feel better without a condom? Yeah, but you know what feels even better than that? Not getting the fucking clap or AIDS. And yet we’re seeing rates of STIs soar because folks of all ages are refusing to protect themselves. It’s fucking 2017. This film takes place at the height of the AIDS epidemic in the 1990s. Learn from that and wrap it, people. AIDS is making a comeback and it doesn’t give a shit that you only fucked once without a condom.

Kids managed to get people talking for multiple reasons. First and foremost, it had an exploitation feel, which made people question whether or not it was moral to allow young performers to act out parts in which their characters engaged in sex and violence. Some great debates were had concerning the nature of art and the subjects of the artist. The film also got parents and their teenagers talking: no one wanted to think it was their kid doing stuff like this, and it dawned on a few of them to have some difficult conversations about protection and birth control. Sometimes, we have to watch something that makes us uncomfortable in order to ask what’s going on right in front of us. This film typifies that both artistically and thematically.

You live in a fool’s paradise if you don’t think kids talk like this.

Can we just thank Larry Clark for giving us Chloe Sevigny and Rosario Dawson? Because I love them both, and this film marked the debut for both actresses. Sevigny has such as strength in her resolve, as well as a fragility that she conveys without having to open her mouth. Dawson’s Ruby is there to offer reassuring hugs and words with an honesty you’d expect from a savvy teenage girl, and you can’t take your eyes off of her performance. I’ve respected these women for some time – it’s nice to go back to the beginning and see not only how far they’ve come, but how apparent their talent was from the early days.

This one is Lou Barlow’s baby. As much as Daniel Johnston was featured, Barlow had a heavy hand in this film’s music. It shows: it’s equal parts experimental and full of emotion. For those of you who aren’t as familiar with his work… you should be. He’s done solo work, as well as Dinosaur Jr., Folk Implosion, and my personal favorite, Sebadoh. If you have not listened to Sebadoh, JESUS H. CHRIST MAN WHAT ARE YOU WAITING FOR?! Bakesale has to be one of the best albums of the 90s. 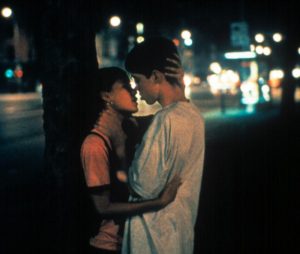 #5 – Larry Clark is a complicated bird

Oh Mr. Clark. I’m not sure what to make of you. Some days, I think you’re a skeezy old man who really likes to see naked 15-year-old ass of any gender. Other days, I think you’ve got an eye that doesn’t flinch. The common theme of Clark’s films is youthful nudity, and he doesn’t shy away from male nudity either. This aspect of his work makes people uncomfortable. However, I think there’s more to it than simply Larry Clark being pervy. This film was a precursor to Bully, which is a film I’ll recommend another day and is completely worth your time for its portrait of teenaged murderers who’ve decided they’re sick of their abuser’s bullshit. Clark likes looking at pieces of growing up that aren’t so pretty. He’s not John Hughes with his first-world problems, I’ll give him that.

Kids is available for free on YouTube. Do yourself a favor and watch it – if anything, it will make you think.