Warning: count(): Parameter must be an array or an object that implements Countable in /homepages/45/d96662078/htdocs/clickandbuilds/TheBackseatDriverReviews/wp-includes/post-template.php on line 316
↓
Home→Gender→Girl on Girl: Female Competition in Black Swan

This analysis comes at the request of one of our readers (hi Lucas!). As of late, Darren Aronofsky has been getting some attention for mother!, some good and some not-so-good (shameless plug: check out Dawn Keetley’s thoughts on the film, which are searing). He’s no stranger to critical analysis: his films are themed statements on perfectionism, with a fairly unhealthy dose of misogyny disguised as art. However, there’s an aspect of human nature present in Black Swan that’s easy to overlook if you’re only looking at the need for artistic perfection or a titillating sex scene between two women: the competition for mates and opportunities. We live in a world that loves to knock itself over talking about sisterhood, but when women compete in this film – namely, Nina (Natalie Portman), Beth (Winona Ryder) and Lily (Mila Kunis) – they fight for the basic needs: sex and existential comfort. 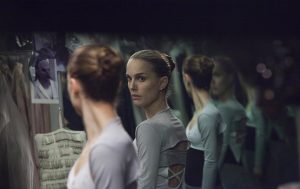 As Nina is our common denominator, we’ll first view her interactions with Beth. Beth has enjoyed a long career with the ballet company, and is now being forced to hang up her dancing shoes. Beth clearly does not want to retire, and takes the news poorly by lashing out at her replacement. From the audience’s perspective, we can’t fault Nina for Beth’s forced retirement: Nina didn’t engineer it, though she’s certainly attempting to benefit from it. Either way, the part would have gone to another dancer – there’s a choice to be made concerning passivity (signified by the rejection of the system in taking the moral high ground) and opportunity (the chance to continue a lifelong career goal). Nina chooses to take the opportunity and campaigns for the part, winning it after biting director Thomas (Vincent Cassell) during a kiss. Beth confronts her replacement with harsh words in a famous interrogation: “What did you do to get this role? He always said you were such a frigid little girl. What’d you do to make him change his mind? Did you suck his cock?” She doesn’t pull punches: she accuses her replacement of being the more desirable mate, not the better dancer. Nina isn’t accused of being a greater talent – she’s directly accused of using sex to secure herself a prosperous role, both personally and professionally. Thomas, for his part, makes smarmy comments to Beth during her drunken breakdown (“My little princess, please, hold it together.”), which only works to place him in the role of power in the scenario. Thomas makes the larger decisions; Thomas determines professional success based on sex appeal and, invariably, youth and desirability. Beth doesn’t seek to rebel against Thomas – she targets Nina for replacing her, telling her, “You make the most of it, Nina.” Effectively, she’s conceding defeat while completely negating the role of talent and physical limitation: a ballerina has a short career lifespan, and Beth would not have been physically able to carry on life as a professional prima ballerina the same way a medical coder, tax attorney or scientist would be able to continue their work. In lashing out against the younger replacement, she views the situation not as female-dancer-versus-the-patriarchy, but as a more primal resentment that she’s being replaced by someone who is younger, more agile, and more sexually attractive than she is to her partner. Beth isn’t mentoring Nina or plotting with her to take down a corrupt system; Beth is actively placing blame and accusations of casting couch practices onto the other woman. 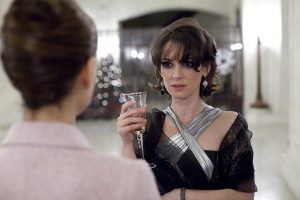 Lily’s situation is far less sympathetic toward Thomas, because it’s clear that his machinations are instigating a sense of competition between Lily and Nina. Initially, Nina has trouble securing the lead in the ballet because while she nails the part of the virginal White Swan, she’s less convincing as the sexpot Black Swan. It’s her act of sexual aggression toward Thomas that earns her the lead, but it’s understudy Lily that makes Nina nervous. Thomas says of watching her dance, “Watch the way she moves. Precise. Effortless. She’s not faking it.” He says this to his self-conscious lead, who’s having trouble grasping at the full range of emotion due to her repression. Thomas uses the comparison to strike up a bit of competition between the two leads. This culminates in a complete mental breakdown of Nina, who imagines Lily turning into her and engaging in a violent battle wherein the Black Swan strangles her and screams, “My turn!” The notion of replacement and competition rears its ugly head, but in this instance, it’s more so Nina’s self-conscious struggle with different fears and aspects of herself rather than rage at Lily. Lily, for her part, stops by to wish her good luck before a flawless performance. The competition isn’t so much one of true competitiveness, but one of paranoia and the need to be the best in both attractiveness and talent. It’s far more a one-sided desire to retain one’s spot. 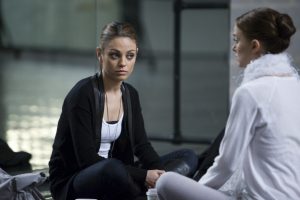 Arguably, Thomas is the main factor of these dynamics, but truly, the actions of both Nina and Beth are rooted in the need to play the game and secure the prize: adaptation to ensure the continuation of one’s creature comforts. In the mating game, both women pursue not only a career – which brings sustenance to both their artistic endeavors and their continued well-being by rendering gainful employment – but a sexual partner as well. Nina isn’t actively sleeping with Thomas, but she damn well wants to be sleeping with the man she moons over, the one who controls her professional well-being. Beth, on the other hand, is implied to have been recently dumped by Thomas, and behaves accordingly: as the woman scorned. Without much beyond the status she’s worked hard to cultivate, Beth attempts suicide; Nina, on the opposite end of that spectrum, kills herself to become the best little Black Swan that ever was. Both are acts of women who seek to shut out the surrounding competition: they must be the best, they have to ensure a place in the pants of the leader, and they have to chase off anyone that could threaten that status. We’re a baby shy of having an even nastier case of one-upmanship, which is curious because it’s not truly about mating: it’s about surviving and placing the self first, others be damned. This side of human nature is, without a doubt, ugly as sin. No one cheers for these women because they’re fighting over who’s the best. They preen and bicker much like women fight over who’s prettier, more successful, or has the most kids: it’s a social game to prove dominance. This isn’t art or perfection. It’s two women duking it out with everyone else like they’re in the ballet version of Dynasty to say that they’re wearing the very best hat at the party. 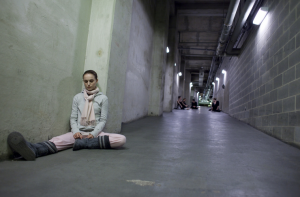 This is where competition gets you.

In this light, it’s difficult to see what our sympathies toward the characters in this film say about our own attitudes. If we feel badly for Beth, then we endorse lashing out at the wrong person; if we express sympathy for Nina, then we’re saying that we want the whiny, sheltered type that throws self-absorbed mini-tantrums to prevail because she wants it. Both care less about the art than they do about their place at the top of the mountain. It’s not easy to take a look at two people who are effectively fighting over a pile of crumbs while Thomas makes off with the rest of the cake, relishing in the entertainment. In the end, Black Swan isn’t about artistic perfection. It’s a pissing contest to see who is the prettiest princess with the most toys.