Warning: count(): Parameter must be an array or an object that implements Countable in /homepages/45/d96662078/htdocs/clickandbuilds/TheBackseatDriverReviews/wp-includes/post-template.php on line 316
↓
Home→Action→Weekend Movies: Five Reasons to Watch Lethal Weapon

Shout out to Rachel Bellwoar, one of my fellow writers over at That’s Not Current. For at least two months now, there has been a brewing battle over at TNC regarding Christmas movie supremacy. I’m in favor of Die Hard (it’s not Christmas until Hans Gruber falls off of Nakatomi Plaza). Rachel, though, is insistent that the ultimate Christmas movie is Lethal Weapon. Now, for the record, I’m not conceding and admitting defeat. Merely putting aside differences during that time of year when you should be nice to other people. Admittedly, Lethal Weapon is good… it’s just not the ultimate Christmas movie. Its awesomeness cannot be denied, though. Here are five reasons to watch it this weekend.

There are few things on this planet more satisfying that a person who has declared that they don’t have time for your crap anymore. Between the huffing and the side-eyes, it’s a glorious thing to watch unfold. Case in point: Danny Glover’s Roger Murtaugh, who is on the precipice of retirement (which, sadly, I will not be able to do until the age of 83… about six days after I pay off my student loans). This is where it all begins. The catch phrase we love and cherish: “I’m too old for this shit.” And yet Murtaugh still goes along with it because that’s who he is: the dude that looks out for his partner. Like it or not, he’ll always have time for your shit because you matter to him. Speaking of which… 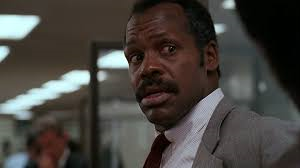 I’m too old for this too, man.

Buddy cop films are a reward unto themselves. They’re so formulaic: oil and water personalities are forced to work together unwillingly, then wind up bonding through danger and personal revelation in order to take down the stereotypical bad guys. It’s genius. I will fall for it every time, in part because half of my friends could be placed in the same scenarios with me and it’d be a pretty great buddy movie. Speaking of which, memo to Hollywood: find some sort of way to get Gina Carano in on this action. Really. Put her in something funny; she’s likable when she relaxes a bit in interviews. Give her a partner and let her be the Riggs role (not suggesting a remake, just something where she can shine). Let the buddy tradition live on.

While we’re at it, Mel Gibson’s Riggs is reason alone to watch this movie. Gibson is a gamble lately: no one wants to really line the pockets of an abusive misogynist, which is an article in its own right. We’re not here to talk about that, though. As Martin Riggs, he’s hysterical. A bit unhinged and completely unorthodox in his methods, Riggs totally needs someone to tell him that dangling someone off the roof of a building is a bad idea. However, we kind of see his point. He gets results, and he does the stuff we want to on some level. Good enough for me. 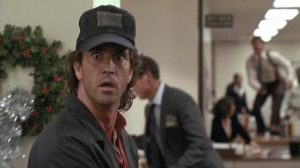 Movies with gun fights, car chases, explosions and over-the-top villains are AWESOME. That is all.

#5 – Depression around the holidays

Let’s get real here: the holidays can really suck if you’re going through some rough stuff. Whether it’s a bad breakup, the first holiday without a parent, the loss of a child, unemployment, familial rejection due to gender/sexual orientation, or readjustment to civilian life after extensive time away in the service, this time of year can be brutal. It leaves a lot of people feeling hopeless and unable to carry on. Watching Riggs, we see a man that has lost everything and wants to be done with living. And then he gets a reason to keep on going. While we all can’t pump bullets into bad guys to deal with our issues, it’s good to see that even when we think it’s all lost, there’s still something out there for us. 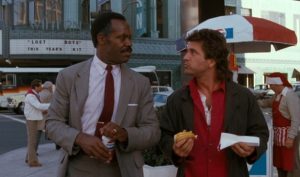 It’s okay to be BFFs when you’re both packing heat.

Pop some popcorn, fire up the tree, and get watching this weekend.