Warning: count(): Parameter must be an array or an object that implements Countable in /homepages/45/d96662078/htdocs/clickandbuilds/TheBackseatDriverReviews/wp-includes/post-template.php on line 316
↓
Home→Attraction→Lying Cow: The Weight Issues in Love, Actually

Last year, I defended the living hell out of the cue card scene in Love, Actually. I still stick to that: it’s not creepy. You know what, though? The movie’s not entirely off the hook. Do I love the different portraits of love in it? Yes, absolutely; overall, I do quite enjoy the film. However, I have a really huge problem with the way that weight gets treated in this film. It’s all directed at women, and it’s used in a way to reinforce that having the slightest bit of extra weight is somehow negative.

There are three women we need to discuss in this: Karen (Emma Thompson), Natalie (Martine McCutcheon), and Sophia (Carla Vasconcelos).

So, Karen’s story is depressing as all hell. Karen spends her days as a loving stay-at-home mom to her two children. What she doesn’t know at the time is that husband Harry (Alan Rickman, rest his soul) is cheating on her with his secretary Mia (Heike Makatsch). At one point, Karen makes reference to her weight gain, comparing herself to Pavorati. Harry offers a half-assed remark about how Pavorati would be lucky to wear her clothes, but really, what would have been nice would have been comments about how he still thinks she’s beautiful. Although, looking at the fact that he’s cheating on her with someone younger and thinner, the compliment would ring hollow. It makes the heartbreak she feels even more acute: as someone who perceives herself to “just” be a stay-at-home mother, who has gained weight, and whose husband is having an affair with a saucy young thing that’s thinner than she is, that has to hurt. Hell, I had someone crush the fuck out of my feelings last year with a comment about my weight; as a woman, you’re self-conscious about that, and it’s even worse when it gets confirmed to you in one way or another that someone more slender is going to take your place, or that you aren’t attractive as you are – that you have to meet some ideal in order to have value. And get this: while Harry proclaims that he’s a fool, we don’t get to see him makes amends. It’s not even that Karen doesn’t get that apology – we don’t get that apology. It pisses us off for every time that the thinner person has gotten praised while we’re the ones toiling away, making sure that the everyday happens, from compliments to quiet insults. Karen deserved better than this, no matter how large her ass had gotten. 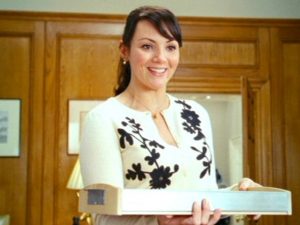 You know what else bothers me? When someone who is not heavyset is made to feel like a brick wall. When Natalie firsts meets David (Hugh Grant), she brings up that her recent ex-boyfriend dumped her because she was getting fat. Later on, several staff members make comments on the fact that she has large thighs. To which I say: fucking get bent. McCutcheon wears the shit out of a pencil skirt in that movie and looks a hell of a lot better than Makatch’s Mia. Maybe it’s the fact that McCutcheon is totally my type; it could very well be bias on my part. Grant’s David doesn’t notice her weight at first, and is incredulous when comments are made; David just sees Natalie, who he finds terribly attractive on several levels. It would have been great if it had been left at this, but no. David has to make a comment when she jumps up and wraps her legs around him at the airport in the epilouge. No, David. Just, no. When a woman (or man – we’re not picky here) jumps you and plants that enthusiastic of a kiss on you, you smile and be happy that someone is that much of a happy puppy to see you. Keep your weight comments to yourself. Or go fuck yourself. Either one is fine by me. 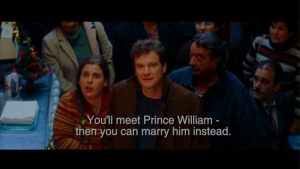 Oh. I had to save this one for last. I cannot even with this character. Between her father’s amazed reaction that someone would possibly want to marry his overweight daughter to the insults that get lobbed at her, I fucking CANNOT. Referring to your child as “Miss Dunkin’ Donut”? No. No, no, no, no, no, no, no. On top of it, the father is incredulous at the notion that someone would want to marry his heavier child. Why is there this notion out there that anyone over starving weight does not deserve to get married? That people who happen to have some meat on them don’t deserve to be found attractive and/or loved? It’s bullshit. Let’s call it what it is: it’s pure, unequivacable bullshit. The idea that someone is going to wind up alone and unloved because of their weight is an insult to everyone. You shut yourself off from amazing people if you think that way, and honestly, if you think that way, I don’t want to know you. Period. What’s even worse? This character goes on to make nasty comments, making her not even likably sarcastic, but bitter and angry. She’s a stereotype. I’m blaming the writers for this. It’s the true low point of the film.

So now that I’m done ranting about these individually, I’m going to rant a little bit more. You know who doesn’t get this kind of treatment? Skinny Juliet (Keira Knightly), who is the center of a love triangle. The rail-thin American foursome that Collin (Kris Marshall) encounters are all sexy, swanky and portrayed as deserving of unrestrained lust because these are dream girls that are into our bumbling hero. Even the slender Judy (Joanna Page) is rewarded for her onscreen nudity with a date and eventual proposal from John (Martin Freeman). As much as you can argue that it’s part of the storyline, consider this: none of those actresses mentioned above is above a size 4 at best, and each is tiny enough to fit into skinny jeans and bare at least a midriff. Emma Thompson, Martine McCutcheon and Carla Vasconcelos all look closer to the way that most of us do, whether it’s an extra ten pounds or an extra fifty. It’s so nice to see that anything larger than a coat rack gets cheated upon and/or humiliated, commented about behind her back, or insulted to her face. Worst of all, it’s implied through action and word that these women are somehow undeserving of love, let alone the same decent treatment all human beings should be afforded. I don’t care if you’re male, female or anything in between: no one has the right to make you feel poorly about yourself. Nobody. If anything, this year has taught me that yes, you are indeed lovable no matter how much you weigh. No one gets to make a comment otherwise – show that person the door if they do. I don’t give a shit if they’re even dressed at that point – show that person the door, and don’t hestitate because that fucker does not deserve you. And most of all, love yourself, extra bits and all. Chances are, someone wouldn’t change you for the world, whether you know it or not.

While Love, Actually does have some points of excellence – unrequited love, the portrait of mourning, parent/child bonds – this is one area that the film that stumbles. People of all body types can be and are loved. We should get that representation in film as well, and without the condition that weight is something to be looked past or overcome. Sometimes, you fall hard for a person and you don’t see weight; you just see that person. It’s incredible when it happens, and it needs to stop being a joke or a point of comparison.