Warning: count(): Parameter must be an array or an object that implements Countable in /homepages/45/d96662078/htdocs/clickandbuilds/TheBackseatDriverReviews/wp-includes/post-template.php on line 316
↓
Home→Horror→Weekend Movies: Five Reasons to Watch Pet

Full confession: I saw the trailer for 2016’s Pet and found myself smitten. As I age, I tend to gravitate more toward horror that’s equal parts psychological and gore – what can I say, it’s all about balance. I need something to get under my skin for it to be fully effective. Luckily, along came Carles Torrens’s film, which has been hit or miss with some folks. Personally, I liked it (but then again, this is coming from someone who had no fucking time for The Wailing, which I still have not forgiven for stealing two and a half hours of my precious life). Here are five reasons to check it out this weekend. 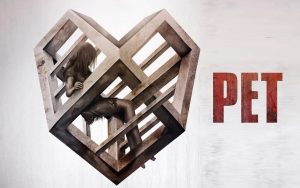 This may seem obvious, but damned if this plot point didn’t slap me in the face and cause my blood to run cold. Seth (Dominic Monaghan) is a shy, lonely man that begins stalking former classmate and now-waitress Holly (Ksenia Solo), eventually kidnapping her and keeping her in a cage. Seth’s work is made easy for him in the age of social media, which is sobering: he figures out her likes and haunts quickly, which makes it all the easier to insinuate himself on her life. As a woman that’s had her fair share of creeps, let me tell you… there’s a reason I try not to check in anywhere on social media. When someone tries to convince you that they’re meant for you and you’re not into it, it’s downright terrifying. This part is well-done.

Props to writer Jeremy Slater, who crafted this tale. After Holly is put into her cage, she engages in psychological warfare with Seth to gain the upper hand, calling into question the identity of the true victim and the true villain. Mind games like this are scary because they bear a strong resemblance of psychological abuse; if you’ve survived a relationship like that, you’ll recognize the hallmarks of someone who has taken a mental pounding in the name of love. Slater demonstrated a real knack for capturing this dynamic, which is unsettling for someone who’s survived that kind of abuse. Oh, and does Slater’s name sound familiar? This is the guy that penned the script for the adaptation of Death Note that Adam Wingard is directing. If this is an indication of what we’re in for, my interest is piqued.

For some, this is a rather romantic weekend.

Oh poor Seth. Yes, he’s a stalker type that can’t quite grasp the meaning of no, but we get to see the flip side of this equation: what drives a person to behave in a fashion we recognize as completely irrational. Watching a man sleepwalk through life is difficult; watching his attempts at breaking out of his shell – and falling flat on his face – are equally as painful. If you’ve ever had an unfulfilling period in your life, you can see some of yourself in Seth, which makes his descent into obsession even more chilling for the rest of us. After all, if the quiet, nebbish animal shelter worker can go nuts, what’s to stop someone like us?

I like Monaghan. He has a rather calming voice, and there’s an appealing everyman quality about him. So when he plays someone that is flawed and makes mistakes, my first thought isn’t to write him off as crazy; I want to make him a cup of tea and help him sort out his shit. Honestly, the portrait of Seth would have gone very wrong if left to someone like Zac Efron or Liam Hemsworth. The casting worked well because Monaghan is likable and can pull off wounded. (Personally, between you and I, I’m hoping he does a screwball comedy at some point. A chick can dream.) 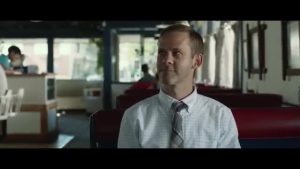 This is quietly slipped in, but it’s there. As Seth works in a shelter, we get to see some of the harsh realities of shelter life, including the loneliness of the animals, the people that care for them, and what happens if a home can’t be found. If you’re an animal person, you’re going to feel some heartbreak there. Again, this is brief, but it’s there.

This one is available on Amazon (for free if you have Prime). Enjoy, and don’t forget to lock your windows.