Warning: count(): Parameter must be an array or an object that implements Countable in /homepages/45/d96662078/htdocs/clickandbuilds/TheBackseatDriverReviews/wp-includes/post-template.php on line 316
↓
Home→Horror→Weekend Movies: Five Reasons to Watch Poltergeist (1982)

Chances are, if you’ve got kids, you wrestle with certain films to show them. You fret and worry about if they’re ready, especially for some of the classic horror films. Such is the case with Poltergeist (1982). The film concerns the Freeling family, who move into their dream home only to discover unruly and dangerous spirits intent on terrorizing them. Here are five reasons to watch it this weekend. 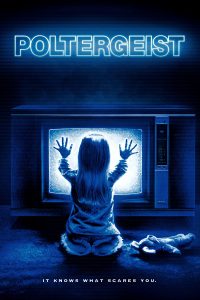 As I age, I find that I misplace things. You’ll know the feeling too: you’ll walk into a room and turn around quickly, slightly disoriented – sometimes, an object will be out of place, and you won’t be able to figure out if it was always like that, or if your imagination is running wild. Such is the case with the start of this film: the Freelings wonder if their minds are playing tricks on them, and they’re quick to explain away any oddities. That’s an everyday feeling sometimes, and it’s unnerving.

The film starts picking up speed once the larger stunts begin. It’s easy to explain an open cupboard; it’s not quite as easy to explain a stack of chairs on the kitchen table, or objects flying around the house. It’s that escalation that catches you off guard, and director Tobe Hooper intensifies the fear felt at this situation through masterful use of music, camera angles and lighting – to say nothing of the special effects.

#3 – Fighting for your family

The Freelings famously engage in an all-out war against the supernatural to get back their abducted child, Carol Anne (Heather O’Rourke). They call in the experts and traverse another dimension to make sure their baby is safe with them. In the age of separated families and social injustice, this theme is so relevant. I doubt few of you would back down from getting back a member of your family. So bear that in mind when you’re watching this, and use that same fight to help reunite people in the real world.

Even some hardcore skeptics get creeped out by all of the stuff that went on behind the scenes with this film. Some say that reports of hauntings and electrocutions and the use of real dead bodies are exaggerated to sell the film. That may be the case, but when the cast – a portion of which died under horrible, unrelated circumstances – is still riled up about their experiences over 35 years later, that’s a strong indicator that something happened, and it wasn’t fun. Which fuels the notoriety of the film even further: we all want to spot something scary, and we want that fear of thinking it could be real.

I love me some Zelda Rubenstein. The woman was fascinating. Did you know that she held a college degree in bacteriology? And that she was an early AIDS activist when people didn’t want to hear about it? And that she championed the treatment of little people in society? That same take-no-prisoners attitude comes out in full force in the character Tangina. Zelda was living proof that the size of the fight in the person was what mattered. There’s a good reason people loved that about this character: her fight and refusal to back down comes through.

Poltergeist is available for rental on Amazon.