Warning: count(): Parameter must be an array or an object that implements Countable in /homepages/45/d96662078/htdocs/clickandbuilds/TheBackseatDriverReviews/wp-includes/post-template.php on line 316
↓
Home→Horror→Weekend Movies: Five Reasons to Watch Rosemary’s Baby

As Valentine’s Day has come and gone… some of you might be in the same position I was in a good 12 years ago. That is, knocked up right after the holiday (given, mine was due to a boring Oscars ceremony, but still, tis the time of year for that sort of thing). What better way to celebrate than to watch a movie about the pregnancy from hell? Yes, we have a warped sense of humor here at this site. That’s not going to stop us, though. Here are five reasons to watch a classic this weekend, if you can get past the fact that it was directed by a fucking trashheap of a human being. 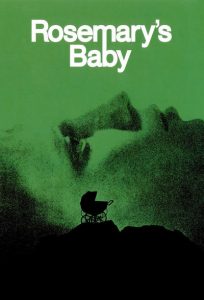 The joys of forced child bearing.

Yep, I am that judgy. You seriously want me to pay for rehashed shit like Rings? No. No dice. I’ll stick with something that was far brainier and had excellent source material, thanks. Snooty? Yes. Valid? Definitely. It’s justified.

#2 – The attitude toward a pregnant woman

The sad reality is that the U.S. is rapidly reaching a point where a woman gains her societal value by the contents of her uterus. One could argue that it’s been this way for a while – ask any woman who elects to remain child-free. However, in the time of restrictive access to birth control and pregnancy concerns – not to mention the attitude that only the baby matters once it exists – this film is particularly relevant. Once you get pregnant, you often stop being you in the name of being a patronized vessel. In that respect, Mai Farrow’s Rosemary is all of us: the most care she receives depends upon the eager anticipation of what she’s gestating. 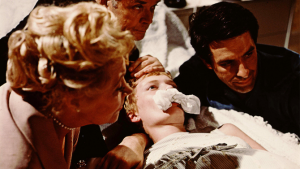 The joys of childbirth.

#3 – The themes of maternal fear are relevant as well

We live in the age of Zika, birth defects and religious fervour denying the health of the mother over the survival of the fetus; there’s so much relevancy here in terms of the things that could possibly go wrong whilst pregnant. The most amazing thing, though, is the way it tackles maternal anxiety. As women, we’re often expected to pretend that pregnancy is one big ball of rainbows, belly kicks and the oh-so-sought-after glow. Newsflash: it’s not a glow, it’s sweat. It’s not just the physical aspect: Rosemary suffers throughout her pregnancy, both in body and mind. There’s doubt and a growing fear that something is wrong, that she caused it, and that no one is going to believe her. And you know what? That’s strangely comforting. When we watch her drop weight and start to doubt the world around her, it’s a reminder that it’s okay to feel like crap and question everything around us as we’re going through something new and scary. It’s okay to admit that we’re scared.

Ruth Gordon was so good as nosy neighbor Minnie that she took home an Oscar. It’s well-deserved: Gordon is terrifying in this role, in part because no one suspects the old lady in the apartment building. Then there’s Charles Grodin, who was so convincing as a condescending gynecologist that he had to go on national television to say that he wasn’t that guy (seriously, women famously avoided him). On top of that, we get Farrow’s aching performance, as well as the smug John Cassavetes and my personal favorite, Sidney Blackmer’s Roman. I hate these people so much. They did their job so well. 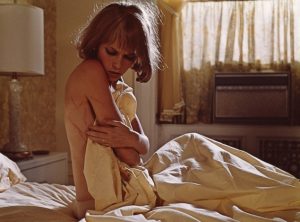 Guy (Cassavetes) has the worst excuse in the world for fucking his unconscious wife: he didn’t want her to miss out on the chance to get pregnant. Because, ya know, that only happens once in a lifetime, amirite? Really, this is the definition of spousal rape in several states: non-consentual sex between spouses. I say several states because this is not true in all of my country, which is disgusting. It’s shameful that someone actually had to fight in court to be recognized as a victim because the perp was her husband. Eff that noise right there. Look at this film, then think about that.

Even though it’s Polanski… rewatch this one. Please. Use the fresh eyes you’ve gained from the current trash fire we’re sitting in.