Warning: count(): Parameter must be an array or an object that implements Countable in /homepages/45/d96662078/htdocs/clickandbuilds/TheBackseatDriverReviews/wp-includes/post-template.php on line 316
↓
Home→Feminine→Pussy Grabs Back: Contrasting Femininity in Death Proof

I think I’m one of the few people on the planet that actually enjoyed the living hell out of Quentin Tarantino’s Death Proof. Everyone I know hates this movie. It gets way more shit than it should. Is it his strongest effort? Nope, but it doesn’t have to be because comparing an artist’s different works is sometimes like asking yourself which child is your favorite: even if there’s a clear winner, they each have their own merits and deserve affection, and when you like the artist enough, no one wants to be that dick. Death Proof is no different. Sure, it’s chatty and a paced a bit more slowly than other efforts, but it’s got a wicked soundtrack (The Coasters! Dave Dee, Dozy, Beaky, Mick and Tich!Pacific Gas & Electric!), and something else: a batch of the most badass women to ever get behind the wheel of a car. In fact, it’s these women that fascinate me: by creating two contrasting groups at various stages of male dependence, Tarantino manages to elevate those who fight back against their would-be murderer to the status of liberated Final Girl. 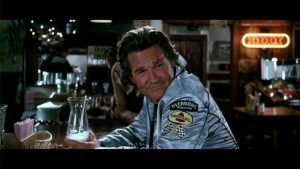 Since we’re about to make a comparison, let’s start with our first control group: the ladies from the first half of the film. We have the following: Butterfly (Vanessa Ferlito), Jungle Julia (Sydney Tamiia Poitier), Shanna (Jordan Ladd), and Pam (Rose McGowan). The group dynamics are fascinating: Shanna is fighting off the advances of Dov (Eli Roth) and Omar (Michael Bacall); Jungle Julia has been climbing her way to the toward the top of a broadcasting career; Butterfly is visiting Austin, TX, and has been dared by Julia to give a lap dance to any man that approaches her, buys her a drink, and quotes Robert Frost; Pam is stewing in a dive bar, insinuating via catty comments that Julia has slept her way to the top. However, what’s most entertaining is the fact that these women are pretty much waiting upon the men in their lives in order to take action. Butterfly is playing games with a suitor, withholding full-on sex in an attempt to foster a relationship rather than a hookup. Julia is literally waiting around for beau Christian Simonson to show up, clutching her phone and texting messages that he’s an asshole when he stands her up. Shanna has a dirty old man for a father that is willing to let his daughter have friends up to his lake house under the condition of no boys allowed; she gets barred from sex – a normal activity for a young woman – because her daddy doesn’t like the idea, despite that she’s clearly of age. Then we have Pam, who doesn’t take the easy solution of calling a cab in favor of accepting a ride from Stuntman Mike (Kurt Russell). While they may appear modern, these women are stuck in a very male world. At one point, we witness Mike using Butterfly’s wounded pride in order to get a lap dance out of her, essentially making his victim perform sexually before he kills her. Make no mistake, these women get dominated. It’s no surprise that Mike murders them – they lack the backbone to make their own choices, choosing petty games, back-biting and performance over intuition and self-respect. 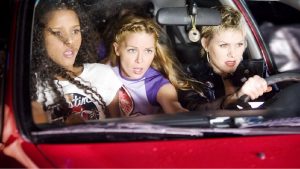 Then there’s our other control group: the women from the second half of the film. Here we have a markedly different group: makeup artist Abernathy (Rosario Dawson); stunt women Kim (Tracie Thoms) and Zoe (Zoe Bell); and actress Lee (Mary Elizabeth Winstead). While Abernathy is also engaged in an unfulfilling relationship, her friends ask her to consider dropping the bullshit and either asking her would-be beau for exclusivity or acceptance that her actions are not sexually fulfilling to him; this forces her to reconsider her actions rather than place total dependency for happiness onto her partner. Kim and Zoe lack these problems – the conflict that arises between them is the deal to never play Ship’s Mast again, which Kim attempts to enforce as an iron-clad contract. While Zoe ultimately wins, Kim does not mince words with her, displaying a ferocity with which to be reckoned. The weak link here is Lee, who is a bit vapid and naive; her reward for passivity is to be left behind by the group when the Dodge Challenger is taken out, under the pretense that she’s a porn star that will service the car’s owner. This implication is actually pretty horrifying: if you’re not paying attention, your friends will leave you to be sexually assaulted so they can go have fun. Lee aside, though, we’ve got a much stronger group of women here.

Yes, group members of our second pool scream while Mike is chasing them, but let’s consider that fact: Mike has to approach this group in a different fashion, and does not achieve his desired ends. With our first group, Mike stalks the women and insinuates himself into their evening. Butterfly gets suspicious of him, but stops short of paying vigilant attention, a fatal mistake. In return, Mike roars past them in his death proof car and smashes head-on into them. With our second group, though, Mike isn’t allowed to get that close – the best he can do is hang out in a restaurant as they talk, with nary an interaction. He has to watch them through binoculars and then give chase. That’s the important part: he has to pursue them from a distance, inching closer because this group is not the spineless group he had previously targeted. He toys with his dinner a bit by crashing his car into the Challenger, but at most, Zoe is thrown from the automobile; no one is killed by his actions, merely scared. Mike’s not expecting Kim to pull a gun on him as he states in a cocky fashion that his attempted murder has been “fun,” nor is he expecting it when Abernathy declares that they should kill him, flipping the tables on him. He’s then chased and beaten to death by three women, one of whom makes a parallel of the pursuit to rape (at this point, we should all be chanting, “Tappin’ that ass!” in Thoms’s voice). Mike picked the wrong group of women with which to mess. 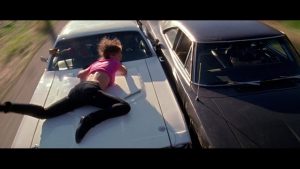 This begs the question of why the first group died and the second lived, and the answer is easy: the first group accepted their gender roles, and the second group did not, going so far as to actively fight back against their aggressor. Every woman from the first group attempted to project independence and failed because she was dependent upon a man. Julia may be a badass DJ, but she’s one that gets stood up and throws a text message tantrum; Butterfly still needs validation that she’s desirable by giving a lapdance; Shanna plays by daddy’s rules; Pam just plain wants a knight in shining armor to drive her home. In stark contrast, Abernathy is told to check her princess complex at the door or stop complaining; Kim and Zoe have much more exciting things to think about than boys. Our second set does not take Mike’s abuse lying down, and pursue him before delivering a ruthless beating in order to teach him a lesson. They have outside interests and stand their ground. More importantly, they support each other, especially when someone tries to come in and push them around. It’s not surprising that the stronger of the two groups survives.

Is the second group perfect? Not at all – the thing with Lee completely pisses me off, and Abernathy’s relationship woes are an essay unto themselves. However, there’s a clear winner in this game: it’s the group of women that refuse to be pushed around. It’s the ones that fight back. In these times, you bet your ass that’s relevant.